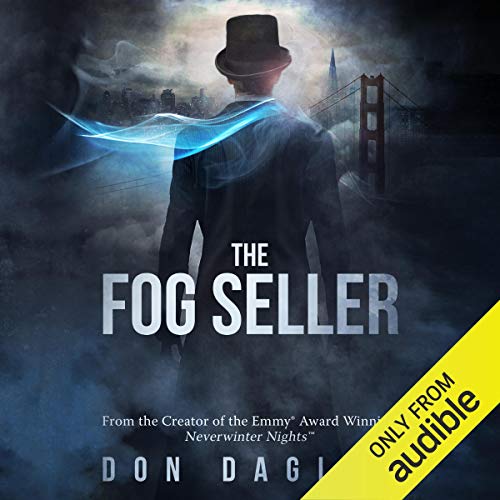 By: Don Daglow
Narrated by: David Stifel
Try for £0.00

From the creator of the Emmy Award-winning Neverwinter Nights, a novel with a unique hero, an unlikely love story, and more twists than San Francisco's Lombard Street.

It's not cozy but it's intimate. It's not procedural but it makes you think, which is why it's been honored both as a mystery and as literary fiction. Its influences range from Raymond Chandler's The Big Sleep to the Coen Brothers' The Big Lebowski to J.D. Salinger's The Catcher in the Rye.

"Rating: 9/10. The intricate plot is ingeniously executed so that all pieces of the puzzle fit together.... Twists and turns that at first appear questionable end up working perfectly.... The prose is top notch.... The book's distinctively original structure moves the story along briskly...." - The BookLife Prize, Publishers Weekly, September 2017

Assassinated: The crusading politician who saved hundreds of San Francisco homes from the bulldozers of a big developer.

Accused: A mysterious young loner who speaks his own unique dialect of English and refuses to answer questions.

Unexpected: A woman who will risk her promising future for a man without a past.

When teacher turned deckhand Steve Ondelle is framed for the killing of a San Francisco supervisor, he tumbles into a world of billion-dollar deals and bizarre sexual adventures, a world where hard evidence depicts him as a misfit who turns to murder.

To expose these freshly-minted lies, Steve must first make peace with a lifetime of painful truths. He travels from the piers of Sausalito to the penthouses of San Francisco, with unlikely allies like Leonard the Human Statue, Eli of the Coral Reef, The Prophet of Market Street.

And Liam the Fog Seller.

What listeners say about The Fog Seller

A well deserved Award Winner of a novel

I had never heard of this book at all, and when the opportunity came for me to listen to it I was surprised to see how many awards it had won, and deservedly so. This tale is meticuously crafted, perfectly plotted, and peppered with realistic and interesting characters.This is more than a mystery. It is a journey into the amazing mind of Don Daglow, and it is one that will make you feel everything that Steve, the MC, is going through.

Steve, the protagonist, just wants to lead a simple life, but suddenly finds himself the suspect of a double homicide. His shipmates decide to help him in his time of troubles, and this is where the story takes off. Questions arise from the typical Whodunnit to simply will Steve's love be requited? Oh, and while it is more than a mystery novel, the mystery is complex and captivating.

Stifel is excellent at drawing you in and holding your attention once he has you. He really makes you believe that he is each individual character, and that the events are really occuring in real time. He elevates an already amazing novel.

Fog Seller is just fabulous, and you will lament that your time with Steve and his crew is over. You will miss them and wish there was more to this story.

This is a bit confusing at first.I am glad I stuck with it.What a story!Liam sells fog.Steve works on a ferry with his friend Luis.He is a bit odd.A murder is attached to him by police and he and friends have to clear his name and many things up.David Stifel was a wonderful narrator.I was given this book by the narrator,author or publisher free for an honest review.

A methodical way of storytelling. No surprises but lots of suspense. A damaged and abused hero, socially but strong spiritually.

This is a wonderful story!

What great fun! The mystery serves as a neat little backdrop for the story of a man learning to be himself.

Complex issues and a mystery!

An interesting cast of characters and several plot lines. It has me wishing that real life crimes could be given this much attention.

Poor Steve just wants to lead a simple life. Then he is accused of murder. He and his friends work to clear his name. Excellent book!!

I could not get through this book.....

This audiobook was such a pleasant surprise for me. I had no idea of what to expect when going into it and ended up really liking it. The first third moved along at a nice pace as did the last third. There was a part in the middle that was kind of slow though. However there was such a unique unexpected twist. I was blown away. I couldn’t wait to see what happened next. The mystery kept me interested and I liked how it kept drawing in new unusual characters. Steve’s character was so well developed. He was extremely interesting. I was drawn to him from the start and wanted to know more about him. Also the narrator was well suited for his character. He did an excellent job. I think that if the pace remained steady and the book was a bit shorter I would have given it 5 stars.
I would like to thank the author/narrator/publisher for generously providing me with a copy of this audiobook in exchange for an unbiased and honest review. All thoughts and opinions are my own.

A Fun Read about The City by the Bay

What a fun and enjoyable read. Many twists and turns and a lot of description of SanFrancisco and the people that live in that beautiful place. We had a lot of fun listening to the story and such a great reader. If you have visited San Francisco, you will really enjoy this book. We couldn't put this book down. Kudos to the author as he is spot on.

Not your typical murder mystery

I approached this book expecting a typical murder mystery. To some it may very well be but I found it more of a psychological study/love story using murder to move our protagonist, Steve, through coming to terms with who he is and finding romance. The eclectic cast of supporting characters assisting Steve on his journey of discovery is a group of street performers, a detective, a ferry deck hand, former students, a scientist, Steve's landlady and a baker.

As the murder investigation moves along different people become suspects and the identity of the killer wasn't tipped until late in the novel. The evidence was not strong enough for an immediate arrest and an elaborate "stage play" is designed to trap the killer. This was a unique turn for me and I enjoyed it very much.

I do recommend a listen to this book. I think it is well worth the time.

Mr Stifel handles the multitude of characters well although I found some of the character voices a little emotionless.

This review copy audiobook was provided by the narrator free of charge via Audiobook Boom. I have provided this review voluntarily.