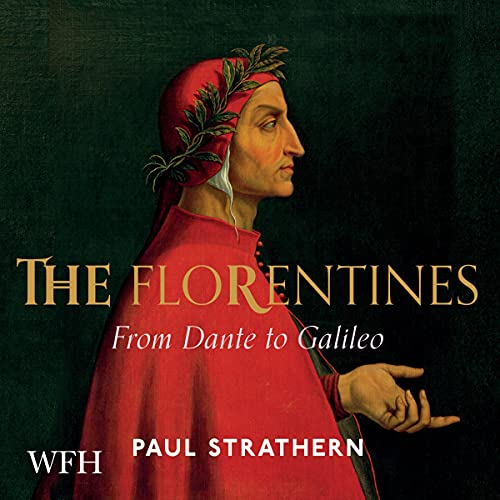 By: Paul Strathern
Narrated by: Rupert Bush
Try for £0.00

A sweeping 400-year history of the Florentines who gave birth to the Renaissance, by the author of The Medici and The Borgias.

Between the birth of Dante in 1265 and the death of Galileo in 1642 something happened that transformed the entire culture of Western civilisation. Painting, sculpture and architecture would all visibly change in such a striking fashion that there could be no going back on what had taken place. Likewise, the thought and self-conception of humanity would take on a completely new aspect. Sciences would be born or emerge in an entirely new guise.

The ideas that broke this mould largely began, and continued to flourish, in the city of Florence in the province of Tuscany in Northern Central Italy. These ideas, which placed an increasing emphasis on the development of our common humanity - rather than other-worldly spirituality - coalesced in what came to be known as humanism. This philosophy and its new ideas would eventually spread across Italy, yet wherever they took hold they would retain an element essential to their origin. And as they spread further across Europe this element would remain.

Transformations of human culture throughout Western history have remained indelibly stamped by their origins. The Reformation would always retain something of Central and Northern Germany. The Industrial Revolution soon outgrew its British origins, yet also retained something of its original template. Closer to the present, the IT revolution that began in Silicon Valley remains indelibly coloured by its Californian origins. Paul Strathern shows how Florence, and the Florentines, played a similar role in the Renaissance.

What listeners say about The Florentines

I enjoyed this book which presented a well argued overview of the main characters of the period and their significance/interconnections. Since the book is arranged essentially with chapters on each individual, sometimes the chronology is a little difficult to follow as we move backwards and forwards through the period hearing about the different lives. Still, an interesting and enlightening account.

My only real gripe was some jarring mispronunciations peppered through the book. 'Aristotelian' was a regular cringe, and the mispronunciation of 'indicted' was a shock in a professionally read book. Also, where sentences were long, the reader placed pauses in odd places, as though they were struggling themselves to keep a sense of what they were reading.

Not a big deal but certainly such things distracted from my personal overall enjoyment.