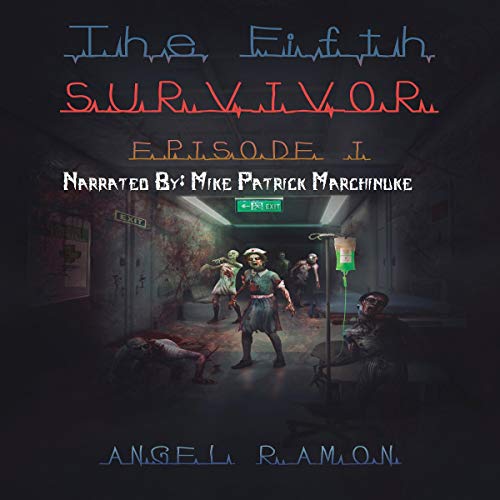 Who says old men can't be badass vigilantes? A middle-aged journalist-turned-vigilante will show he can kick some serious zombie butt and save the friggin' world while maintaining his unhealthy bacon obsession. Step in and see if you survive the nightmare.

On July 7, 2007, the first-ever zombie outbreak took place in Brooklyn, NY. Four survivors were able to escape and live through the horrors. These survivors included Angel, Maria, Luis, and Joe. While most literature will say there were four survivors who survived that fateful day, there was one survivor who was never spotted or even mentioned. He will always be known as the unknown survivor of the first outbreak. This survivor is known as George Fisher, and he knows the ins and outs of Hybrid.

Behind the secret cloak of his job as a janitor, he intends to expose Hybrid for their misdeeds from the inside out. This secret survivor would rather be referenced as the “fifth survivor”.

Join George in his survival horror adventure. George learns more about the giant pharmaceutical company, The Hybrid Corporation. With its checkered past, he becomes suspicious about their real intentions when they decide they want to build a substation in his hometown of Cypress Hills.

Deciding to make the dangerous decision to probe Hybrid without permission, George will enter a construction site, the Hybrid headquarters, and sneak into a meeting in the hospital. What he doesn't know is that when he decides to sneak into the hospital meeting, the Raven Hawk virus has already been released. With the hospital infected with zombies and other biohazard creatures, will he escape to continue his probe? Or has he gotten his foot in too deep into a rat trap that threatens mankind?

See the new world order plot through the eyes of the journalist known as the "fish master".

This is a game-lit set in the real world, so it's all real, even the zombies! The series where the worlds of Charles Bronson and Resident Evil combine into an episodic book series!

What listeners say about The Fifth Survivor: Episode 1

exciting and fast paced. finished it in two days as I needed to know what happened next. a different take on the normal zombie genre. which made it more interesting as I had no idea what what going to happen next. looking forward to reading the next installments.

This book is a game transformed into a pleasant listening experience. There are clear references from the game it is based on but that made it more enjoyable as gave a sense of direction but still with some twists and turns.

The story was weird but entertaining. Narration was great and probably what kept me listening cause it was just weird.

This is a completely new genre for me and I have to say I was pleasantly surprised. I enjoyed the gaming commentary and choices given to George like you would in a game.
the story follows George as he tries to find out what Hybrid are up to and the challenges he faces in the hours before and just after the outbreak. I will definitely be listening to book 2.

This book was fast paced, non stop action, delivered in an undercover reporter style in the format of an interactive game. There were plenty of zombies and mutant monsters developed by the sinister Hybrid company, and a high body count and plenty of gore.

Ok, Guys and Gals you know that I am a horror nut, and lust after all things zombies especially. Secondly, I pretty much adore short stories. To me a good story that is short is hard to tell. There’s a lot you have to trim away and yet still tell a tale and get some sort of impact out of it. Put the two of those things together and you have one happy funeral director.

The fifth survivor comes across like a real-life resident evil combined with some James Bond type elements. Angel Ramon has taken who I believe to be his real life hero, George Fisher, an all around cool cat who like to write, and acting as a literary agent who has a license to kill. In the novel George is rough, tough, and sneaky as Pete. He is as good with a gun as he is a disguise and is out to solve a question about some place called Hybrid. In the process he encounters zombies, mutants, corporate bad guys, and an unkillable foe called Mr. Z. I guessing the Z is for zombie, but I’m not all that smart.

The concept is well executed, but for me it was a little difficult to listen to because it is that present tense stuff that makes it hard for me to get into. Full disclosure on that. I have to look at it beyond that point to be fair, but that style of writing is really hard for me to listen to or just read. It’s my personal baggage. So, skipping the style the other issue I had is that there were some scenes that could have been more fleshed out, as in some more description rather than telling us what happened.

The story is pretty wild and pure cheesy fun, sort of reminding me of the Return of the Living Dead. There are plenty of zombies, bacon, and badass George to keep you interested as man-eating frogs try to swallow you whole, and zombies try to swallow your soul. This definitely has the crazy camp of Evil Dead mashed up with Resident Evil. To be honest I would love to see Angel take on a combo of his 5th survivor novels and the old Playstation game, Dino Crisis. I know he loves dinos, and if we could get some friggin zombie fossils for George to contend with all would be right in the world. The story is pure crazy over the top fun mixed with undead cannibals, what’s not to like.

The narration by MP is pretty good. I think he did a great job and played everything straight. He clearly had fun with the material but didn’t treat it like so many people do horror in general, like it is something beneath them. Horror is the purest piece of writing. It taps into something primal that we cannot hide from or disguise as something else. M.P. is an MVP for how he took care of this book.

Final score: 7.6 Stars. I think Angel captures the mood and atmosphere well, but does have a few parts where the show don’t tell rule applies. Still the book is buckets of blood fun. If you like dead guys, creepy mutants and hardcore grumpy old guys then this is something you want to check out.

Angel's initial book is a definite throwback to the resident evil days of old including a larger than life laundry list of bad guys and random weapon drops.
The performance was great. This is the first audio I've listened to with this Narrator, and I wasn't disappointed. I don't think the author could have picked a better narrator. His style absolutely fits the tone of the work. I hope to see many more from this duo.

Fascinating Can't wait for the next episode

The story was interesting, a little out there, but I like that. The narrator was a good fit.

Not a bad story, and may check out the others.

The story is very reminiscent of resident evil. Wile the story is ok I don't think the writing style makes for a good audiobook.

This book delivers what was advertised

The book presents a different side to Gamelit that I am used to. It is definitely what is advertised, very Resident Evil-esque. I was getting a strong “I’m watching someone play a video game” vibe from this book. The narrator does a really good job.

this book wasn't what I thought it would be.. it has a game style mixed in with zombie story, now if you're gamer great book..

ZombieLitRPG? Is that a thing? No, well it is now.

This is going to take some getting used to. I love Zombie books, I just started to dip my toes into GameLit/LitRPG, but both in one, WOW! The story starts off interesting enough to keep me flipping pages. There isn't ton of game-stats, and I like that, just enough so you know the genre and how it impacts good ol' Georgie boy. I look forward to continuing the story and seeing if our bad ass gets the bad dudes!

It was a wonderful read and I'm a sucker for horror, zombies and video games which meshes nicely in this story. You follow along with George, a school janitor by day and an investigative reporter looking to uncover the mystery as to why the shady mega pharmaceutical company Hybrid doing in a small area just on the outskirts of New York city.
After a lot of sneaking and snooping, he uncovers that Hybrid is partnering with a local hospital to test its cure for cancer drug in the patients. George discovers and tries to collect evidence that Hybrid is up to no good and runs into zombies, freaky creatures like man eating frogs, lizard creatures, and worst of them all: Mr Z, a superhuman monster that won't stay dead.it's a wonderful story that you can actually feel like you're playing a game like Resident Evil. One thing that caught my attention was the author put in choices that George should make, either conversation or what to do, like in games such as Mass Effect. Part of me wishes that I could make the different choices and see where the story goes, like I did with old find your own fate novels. That would make this wonderful story interactive and unique, but might be a pain in the zombie bite to do. Yes, I just geeked out and with that, I highly recommend this one!I

The Fifth Survivor is an enjoyable litRPG in the horror genre. The protagonist was interesting and didn't fall into any of the normal tropes. You won't go wrong listening to this audiobook.

First I will say I misunderstood the beginning of the book that explained things a bit. I got confused on the writing until I figured out that this was reading as a video game. When I did I caught on. once you picture yourself playing zombie video game it all makes sense.

I am sorry that I did not like the writing itself. It used redundant wording a lot in the descriptions. I think this author has potential though.