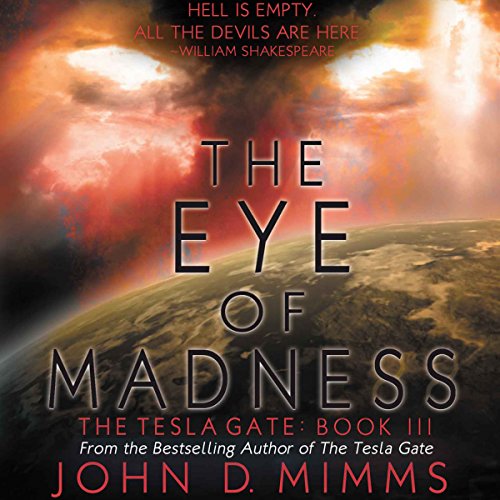 The Eye of Madness

When the eye of the cosmic storm passes over Earth, the Impals - visible spirits who can't cross over - disappear. But an ethereal void opens, releasing the lost souls of murderers, rapists, and genocidal maniacs. As darkness and chaos overtake the Earth, people everywhere face horrific fates. No one is safe who falls into the shadows.

General Ott Garrison is immune to harm, which he feels is a sign from God; he is meant to lead. His son, Cecil, fears the opposite - that the general is a kindred spirit with the evil infesting the world. On the run, Cecil and members of the Myriad Resistance become trapped in a secluded cabin in the Virginia wilderness. The only thing keeping what lies in the shadows of the thick woods at bay is a gasoline-powered generator, which is running dangerously low on fuel.

Soon the device feared to destroy the soul - The Tesla Gate - may be the world's only option for salvation.

What listeners say about The Eye of Madness

Where does The Eye of Madness rank among all the audiobooks you’ve listened to so far?

Very High It has to at least be in my top five of all time!

Yes. It was crazy!! (In a good way) It was a great combo of suspense, terror, and action

Great voice! He nailed the character's voices, especially the accents. He has a very haunting tone

The ending was incredible, but there were several woven through out the book