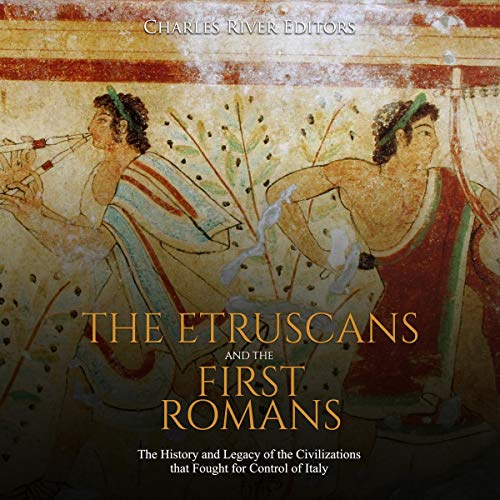 The Etruscans and the First Romans

By: Charles River Editors
Narrated by: Stephen Platt
Try for £0.00

When people think of ancient Italy, the Romans are usually the first and last people who come to mind, but long before Rome was built by Latin-speaking people, the culture of Italy was dominated by the Etruscans. Although the Etruscans may not comprise the core of most histories of the ancient Mediterranean, they exerted a profound influence on the region from the eighth to fifth centuries BCE that continued to resonate for centuries after as the Romans carried on many of their traditions. Today, much of what is known about the Etruscans comes from the ancient Roman and Greek writers who had a deep respect for them but saw them as exotic and foreign. As the famous Roman philosopher Seneca wrote about the Etruscans, “Whereas we believe lightning to be released as a result of the collision of clouds, they believe that the clouds collide so as to release lightning: for as they attribute all to deity, they are led to believe not that things have a meaning insofar as they occur, but rather that they occur because they must have a meaning.”

The Etruscans referred to themselves as “Rasenna” in their own language, but the Greeks called them “Tyrrhenians”, and the Romans referred to them as “Etrusci”, which is where the modern term Etruscan is derived (Cornell 1995, 45). As this suggests, reconstructing Etruscan history is based primarily on the Greco-Roman accounts, but other sources are utilized by modern scholars to create a more accurate picture.

Unfortunately, despite the fact the Etruscans were a literate people, their own histories have disappeared without a trace. Nevertheless, even with this lack of primary sources, the abundance of classical writings about the Etruscans and modern historical, archaeological, and art historical studies can establish an image of Etruscan history and culture that, although not complete, is enough for scholars to arrive at some important conclusions. An in-depth examination of Etruscan history and culture reveals that the Etruscans developed a culture that was as advanced as that of their Greek contemporaries and was also one that the later Romans were indebted to on many levels.

What listeners say about The Etruscans and the First Romans