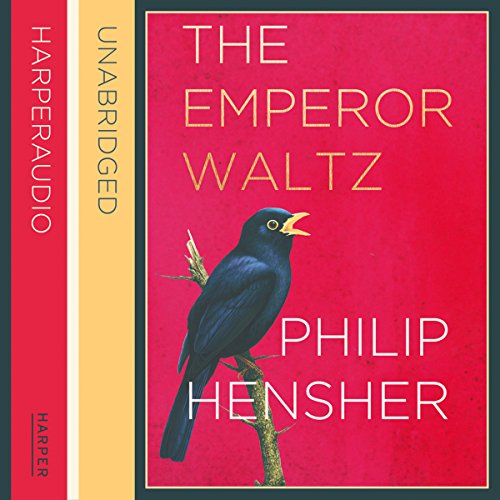 The new novel from Booker Prize-shortlisted Philip Hensher - his most ambitious and daring novel yet. An astonishing novel, The Emperor Waltz draws together various narrative strands into a compelling symphonic whole. In a third-century desert settlement on the fringes of the Roman Empire, a new wife becomes fascinated by a cult that is persecuted by the Emperor Diocletian.

In 1922, Christian, a young artist, travels to Weimar to begin his studies at the Bauhaus, where the avant-garde confronts conservative elements around it. With postwar Germany in turmoil, while the Bauhaus attempts to explore radical ways of thinking and living, Christian finds that love will change him forever. And in 1970s London Duncan uses his inheritance to establish the country's first gay bookshop in the face of opposition from the neighbours and victimisation by the police.

Delving deep into the human spirit to explore connections between love, sanctity, commitment and virtue, Philip Hensher takes as his subject small groups of men and women, tightly bound together, trying to change the world through the example of their lives. The Emperor Waltz is an absorbing echo-chamber of a novel, innovative and compelling, that explores what it means for us to belong to each other.

"An unostentatious tour de force, combining a tender and richly affectionate family memoir with a vividly evoked portrait of town and country life and the story of the birth of a nation. It is full of surprises." (Margaret Drabble)
"Beautifully packed with detail… does for Bangladesh what Salmon Rushdie did for India with Midnight's Children… It is a remarkable re-creation of a land that most of us know little about." (Sunday Times)
"This is his most purely pleasurable novel to date." (Daily Mail)
"Highly impressive… for all Hensher's accomplished ventriloquism - his ability to inhabit the voice of a Muslim child and a history teacher at the same time - his own voice is not lost… heart-breaking." (Guardian)
"A deeply interesting book … The joins are seamless … It is inventive, clever and loving; a Booker candidate, I would have thought.' Spectator‘… this delightful book shows for the first time what Hensher has largely concealed in the past: his heart." (Amanda Craig, Independent on Sunday)

What listeners say about The Emperor Waltz

What disappointed you about The Emperor Waltz?

I have returned this book as it failed to reach the level I expected from the very glowing reviews! 3 very different stories from different periods, with no apparent link! I have kept on with it in the hope that it would become clearer, but am too bored now! I found the male narrator's style extremely irritating and quite tedious too. suspect this wouldn't have helped to move the story along.

Need something a bit more light and fun!

I would have much preferred to read this

The book has such a dazzling scope, with many diverse characters, that the audio book can sorely disappoint and fail to do justice to the author.

The narrator who covered the death bed chapters almost made me give up. I found his delivery so slowly and excruciatingly enunciated that it totally intruded on my enjoyment, and even my understanding of the text. The other narrators were better, but I felt that none were good enough for the narratives.

Absolutely not! I think there would be time for nothing else, and I would probably go mad.

This is not a straightforward novel with a clear narrative. It is a big, bold, complex set of narratives, very loosely connected. I think that the right narrators could enhance the text and make it a richer experience than just reading the book. Unfortunately this set of narrators had the opposite effect for me.