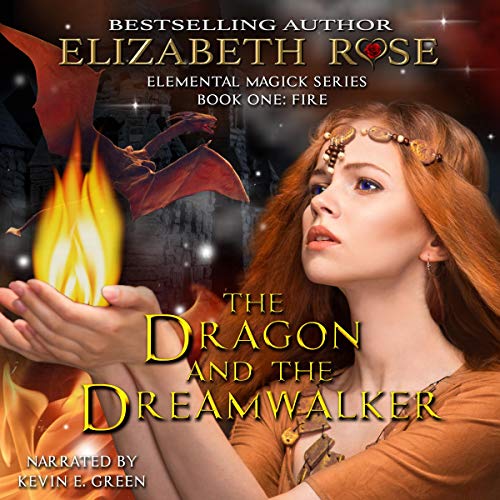 The Dragon and the Dreamwalker

By: Elizabeth Rose
Narrated by: Kevin E. Green
Try for £0.00

Drake of Dunsbard saves Brynn from being sacrificed to Dracus, the dragon of Lornoon. He is shocked to see the dragon's fire has not harmed her and realizes she must be the Lady of Fire that the villagers fear and call a witch.

Brynn has faerie blood running through her veins, and while fire gives her power and cannot harm her, water weakens her and can destroy her. She is thrilled to have been saved by a heroic knight, until she awakes and realizes he has brought her to her late father's castle. She knows at once her savior is none other than the infamous Dragon's Son. The feared man of all, and also the man who stormed her father's castle and claimed it as his own. And while their relationship on the physical plane is rocky, Brynn has the ability to dreamwalk, leave her body in her sleep, and their relationship on the etheric plane is much different indeed.

Can two feared people work together to destroy the dragon, or will they be stopped by their haunting pasts as they realize they really fear themselves?

What listeners say about The Dragon and the Dreamwalker

Elizabeth Rose has a talent for taking familiar characters and stories from fairy tales, myths, and fantasy and giving them a little twist, just enough to make them a little different and much more interesting. The Dragon and the Dreamwalker is no exception. Action, adventure, drama, betrayal, and treachery abound in this one, but it is the characters that draw you in and keep your attention. Brynn is fae and human. She is an elemental; fire is her strength. Her story of the history and evolution of the elemental fae is fascinating. Her second power, dreamwalking (astral projection), is instrumental in coming to know her husband and finding a way to defeat the dragon. Drake has a dark and painful past that is responsible for his quest to destroy Dracos. Stubborn and angry, it takes a while for him to understand how and why he is connected to Dracos, and what he must do to win this battle. These two are not alone. Drake’s squire Asad is on hand to protect him and give him advice about romance. Birdie, Brynn’s maid, tries to help and take care of her. Her inability to keep a secret both helps and hinders. These two add a good bit of humor to the story. Juturna, seer and healer, tends their wounds and nudges them toward the answers they seek. As always, the talented Kevin E. Green brings the story to life. I recommend this compelling story with rambunctious characters. This is the first in the series and I look forward to meeting Brynn’s friends.

This was the first book of the Elemental series, it was a very good story, it kept me wanting to get back to it as soon as I could and when I did I couldn't stop listening, even though Brynn was soo annoying, arrogant, deceptive, aggravating and stubborn to the extent that I couldn't bear her anymore. I don't know how Drake put up with her and didn't send her to blazes, because her attitude went on till chapter 23, only 10 chapters before the end. But then she started to change towards Drake and it got soo much better. I loved the last 10 chapters. The narrator Kevin Green was brilliant. I love his voice and love the way he changes it for each character. I prefer him much more than Brian Gill. This book is definitely worth a credit. Now on to the next one.

The Elemental series first book starts off kinda slow, but within the second chapter, I was hooked on this series. It has it all, dragons, witches, intrigue, frustration, and of course love. The element of fire lives within Brynn, can Drake find his heart and accept her love?? Elizabeth Rose has another winning series in the works!

The Dragon and the Dreamwalker

I have enjoyed this book very much. The narrator was excellent and told the story very well. The story was about a village whose lord and his wife were killed by a gang whose leader belonged to an evil dragon.
The daughter of the late lord had to marry the dragons son. She was an elemental of fire and had mystical powers. The story was so good and went on to prove that love is stronger than hate. This is book of good and evil. This is the first book in the elementals series. Now on to book two. Thank You Miss Elizabeth Rose. X

I loved listening to this book. There is action, romance, and a little suspense. The characters are interesting. The narrator does a good job.

I love the characters uniqueness. Nice twist to the standard magical beings. Did not see the ending coming. Well done

Dragons and magic and witches and oh my!
A wonderful start to a new series that you will absolutely think is magical.

loved this story a lot of twists and turns and unexpected paths. loved this from the beginning ❤

This is the first book in a fantasy series and as such I found it to be a good read. Plenty of action and a complete diversion from reality. I enjoyed the characters and how they were constantly having to look as their own actions as a cause and effect of everything happening around them. I am looking forward to the rest of this series as it is a lovely change of pace for me.

Elizabeth has written another great story! Drake and Bren lived in a magical world and walked through fire on the journey. Kevin E. Green was the perfect narrator for this one! I love how he can get you right into the characters with his accents.

Great story with many twists. An underlying truth is woven through the story about feeding the dragon and learning to overcome it.