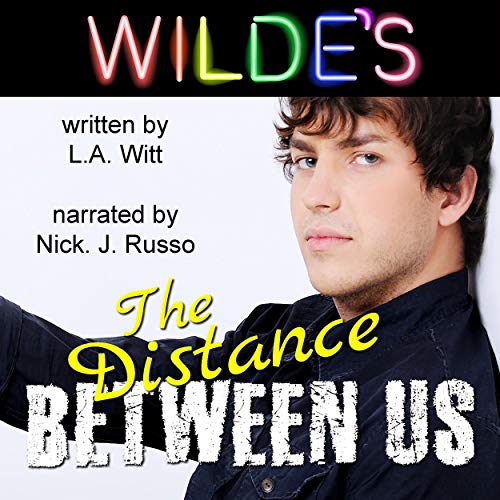 The Distance Between Us

After 10 years together, Ethan Mallory and Rhett Solomon are calling it quits and are ready to move on. Thanks to Seattle’s depressed real estate market, though, they’re stuck living as roommates with a hefty mortgage hanging over their heads. In an effort to speed things along, they decide to bring in some extra money by renting out the spare bedroom.

Wilde’s bartender, Kieran Frost, moves in, and suddenly, the only thing Ethan and Rhett both want more than getting away from each other is getting close to their single, young, hot roommate. Kieran doesn’t mind the attention from both, and he certainly doesn’t mind sharing.

Their combined chemistry ignites something else that Ethan and Rhett had thought was long dead - the mutual attraction that drew them together in the first place.

Except bitter jealousy over Kieran could push them even farther apart....

This 53,000-word novel was previously published and has been lightly revised.

What listeners say about The Distance Between Us

The performance from the narrator is also very important for me. I can't listen to a lot, because my English as a non-native-speaker isn't so perfect to follow a whole story over hours, when the narrator speaks too fast or too sloppy. Normally I have to SEE the person, who is talking to me in English. Nick J Russo is one of the top 5 narrators for me, I can listen without break and have no problems to follow.
I'm just not yet finish with the book, but I listen enough to give a review.

Hot! Hot! Hot! Yes, there are lots of sex scenes in this one and some of them are quite similar, but, on the whole, they are there for a reason. The story is told from only Rhett’s POV. It’s a story of facing the past and coming to terms with a relationship that had disintegrated through poor communication despite the love the two guys still had for each other. Kieran helped them realise this and resolve the situation. I liked the portrayal of the pain and anger, the lust-filled looks, the emotions that still lingered there beneath the surface.

Nick’s narration was superb throughout. I had to chuckle as I pictured him narrating all those sex scenes. Well done, you!

Well Lori, as usual you did not disappoint. This story was full of surprises. Just when I thought I knew what was going on with Ethan and Rhett the story turns in an unexpected direction. The discontent between these two had my mind reeling as both characters are flawed men. Then Kieran, a bartender from Wilde’s, enters the picture. The sexual chemistry ignites immediately. Again I was certain I knew where things were heading between these three but no, the story jerks in another direction. I had to take a breath because of all the very real and raw emotions. This story gave me mental whiplash but in the best way. It is anything but predictable. As usual Nick Russo did an excellent job. He had me feeling all the emotional angst from all 3 characters. One word, memorable. I gave the story 4.5 stars and the performance a 5.

This book...this book is made for all my smutty sexy time lovers! Three love able main characters, a tragic and painful situation, a hilarious and spunky college aged daughter and all the sex you could dream of.

This book also does a good job of not being overly angst riddled, and as much as miscommunication plays a role, clear and open communication saves the day. I cannot wait for Kirans solo story

The characters are so relatable because misunderstandings happen and make a rift. Definitely worth the listen. Great narration!!

I liked this book but didn't love it. Nick Russo did a great job narrating and it was interesting having a relationship between three people only in one POV. Otherwise, I felt the story wasn't very fleshed out other than the sex scenes and a few non sex scenes where the characters had dialogue. The sex scenes were a little formulaic basically the same two acts just in different configurations and never any prep? All in all, it was a pretty good story but not my favorite.

this is the story of sex a lot of sex details interactive engaging. be careful what you wish for.

I took a chanse with this book becouse even if I didnt like Hiatus I still like some of L.A. Witts work, but Im sad to say this three-way relationship was another dissappointment for me. This whole story was tols from Rhetts perspective and I must say it was hard to sympatise with the other charachters.
I like hot sex in books but when maybe 1.5 hour of the book wasnt sex I just call it porn and the little story we got was just depressing. We got no explenation to why Ethan and Rhett was fighting and that the same day Kieran move in he sleep with Ethan (whom for the record is one of the landlords). And that they keep sleeping with him seperatly untill the "great" idee of a 3-way. You would think that if you move in with 2 guys that obviesly own the house that there souls be some history there, but Kieran still keep sleping with them. How akward isnt that? And even if the sex was fairely hot it was pritty much the same over and over and the constant "Oh God" every time ended up making me roll my eyes. What pissed me of even more was that at the end Rhett pritty much got all the blame for EVERYTHING! If Ethan wanted to fix things with Rhett at the start when things started to go bad he could have just said so, insted of his "I did everything I could think of exept talking to you"... You would think that after 10 years together they would be abel to talk about there problems.
And that Kieran blamed Rhett for using him for sex when it was him initiation like 90% of it all with both of them.
Only thing that made this really barabell was Nick whoms narration once again was amazing, just to bad it wasnt enough to make me like the story.