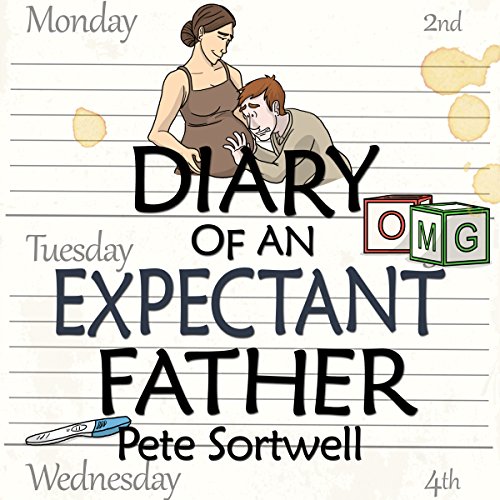 The Diary of an Expectant Father

Not only is Graham Peterson unlucky in his choice of careers, he's also been terrible with women throughout his adult life. That changes when he meets Alison on a work night out. Unfortunately for Graham, however, things change so drastically that within a month of dating Alison, he gets the news that he's about to become a father for the first time.

The Diary of an Expectant Father charts the months leading up to what should be the happiest day of a young couple's life, but with a relationship so new and a career so bad, can Graham keep everything together for the sake of his unborn child?

With all the pitfalls and worries of an expectant father charted, this book is for all those who have been through pregnancy or just want to know how a man deals with all these things internally.

Expectant Father is the first in a series of diaries by Graham Peterson, who sometimes thinks he's writing to an alien warlord from the future. The next in the series, The Diary of a Hapless Father: Months 1-3, charts those first three terrifying months of parenthood.

What listeners say about The Diary of an Expectant Father

Would you consider the audio edition of The Diary of an Expectant Father to be better than the print version?

One of the few audiobooks ive heard where the reader is engaging with the story fully.. clearly has put time and effort into getting this right. laughed out loud throughout.. great narration Will M Watt!

What was one of the most memorable moments of The Diary of an Expectant Father?

Wills commentary of the scene in A+E had me in stitches..

What does Will M Watt bring to the story that you wouldn’t experience if you had only read the book?

Brilliant story, wonderfully read. Made me laugh and cry. Could relate to so much, interesting to hear a Dads perspective. 👶🏼.

Loved it. Enjoyed getting to know the characters, I want to know more.
Humorous, I was able to relate, giggled, sighed and laughed. Well written. Well read. I listened to it more than once!

I found this in the non-fiction section and find it very hard to believe. It reminds me strongly of Adrian Mole whose "diaries" I love as a work of fiction from a guy who isn't as smart as he thinks he is.

Here we have a guy who writes smarter than the character he portrays, and hence just comes across as fake. Right up to the diary entries he's making as his partner is in Labour? Seriously?!

I love this book. This is about a man and woman, Graham and Alison who get pregnant and he decides to take an active role in her pregnancy. He purchases a book and decides to keep a daddy diary. He goes through everything with her, meanwhile logging everything in his journal.

I liked whenever he wrote about morning sickness, wondering who came up with that term as it always happens in the evening. Very true. He goes through wondering about Down Syndrome and the sex of the baby to sonograms and feeling the baby kick. He even notes when her hormone swings really kick in.

They decide to move in together but he worries about his job and how he's going to support his family. They're having a midwife deliver the baby but the baby goes past the due date.

I really like the idea of this audiobook. It shows a father being active in the pregnancy AND attentive to the mother of his child. I would recommend this one for any expecting parents. I don't think it's meant to be a guidebook but it's a good story. Looking forward to the next in the series. I want to know what happens next.

Will Matt does a great job narrating this book. It's told as journal entries which I liked. He fits the part very well. A very nice, easy listen.

Audiobook provided for an unbiased review.

A must read for expecting parents!

This book takes the not so glamorous aspects of pregnancy and makes them down right hilarious.

Graham starts off writing his diary as sort of a time capsule for an alien warlord to find. As he starts to get into unloading through his writing he brings up lists of things that worry him. He starts to add in his experiences and you just get drawn in to this book. It is one laugh right after another from the photo booth flood pregnancy test, to the horrible co-workers, to working up the courage to tell the grandparents to be. I loved getting the male point of view on the whole situation.

Will M Watt does a fabulous job with the narration. He has a great reading voice and a wonderful accent, and he added plenty of emotion to this book.

Audiobook received for an honest review.

What to expect when your expecting Daddy version:

If you could sum up The Diary of an Expectant Father in three words, what would they be?

Funny, emotional and too short!

What was one of the most memorable moments of The Diary of an Expectant Father?

When Alison takes the test to find out if she is indeed pregnant.

What does Will M Watt bring to the story that you wouldn’t experience if you just read the book?

Mr. Watt has a humor about his voice that makes this a very easy listen. He brings you right into the story. While the story was written in a diary format, he was able to make it flow quite nicely. His character voices were very nice.

The Diary of an Expectant Father is a short novel about the months leading up to the birth of Graham and Alison's child. As Graham only knew Allison a short time before she got pregnant, we are also seeing the growth of their relationship.

Mr. Sortwell has a nice writing style that makes for an easy listening book. I look forward to listening to the next book in the series.

I thought this was a pretty good story. Being a father myself I went through many of the same things that he is going through.

Would you consider the audio edition of The Diary of an Expectant Father to be better than the print version?

I bet it is...the narration was super great!!

Have you listened to any of Will M Watt’s other performances before? How does this one compare?

He is super fantastic, and I would listen to him anytime!!!

I did...its short and sweet and keeps your interest from beginning to end!!

I LOVED THIS!!! This is well written and narrated to perfection! It is a short story about a dad to be, and all his anxiety and thoughts...he keeps a diary to help ease his mind, and you can really relate to him....he is super funny and I cant wait to listen to book 2! 2 thumbs up and a highly recommend!!!!

Would you listen to The Diary of an Expectant Father again? Why?

Yes. I found this a fun and honest view of pregnancy for the first timer.

The funny anecdotes about pregnancy.

What about Will M Watt’s performance did you like?

He presented the characters well and was easy to listen to.

I really enjoyed this book. Graham and Alison are fabulous characters who are more than relatable. Graham is so honest about his thoughts and feelings, it is a great view of how a first pregnancy might seem. His straight forward, this is how it is view of pregnancy is refreshing to read.

I received this audiobook for free in exchange for an honest review.

One of the few audiobooks ive heard where the narrator is engaging with the story fully. I laughed and laughed out loud throughout.. great narration

I went into this book expecting a comedy about a man making a mess of things. There were a few laughs, but it was actually much deeper than that. Graham is a great guy and did a fantastic job of navigating the first year of becoming a father.

This book is the journey from finding out his girlfriend of a few weeks is pregnant to the birth. It is written in diary entry style and I enjoyed seeing Graham's inner thoughts. I liked Graham and Alison.

I listened to the audiobook edition which I received free in exchange for an honest review. The narrator was well suited to this book. He spoke clearly and at a good pace.

I revieved this audiobook in return for an unbiased review.

This is a highly amusing short story,( 2hours,18 mins) the title explains it all, Graham suddenly finds he is about to become a father .
It is told in diary form but this does not at all spoil the plot/story.
If any of you men are in doubt as to whether you want to enter fatherhood or not , you should listen to this book, if you are not put off - then you are ready !!

perfectly narrated by Will M Watt, siuted the comical style without sounding rediculous

I enjoyed this immensely. The checklists at the beginning of the book, where the father-to-be was ticking off every reason he was worried about being a father were priceless! Totally true, though, as any first-time-expecting parents will tell you. The narrator was very talented, with a wide range of vocalizations that brought the book to life. I would totally recommend this to anyone who already has kids, because it might scare off prospective parents!