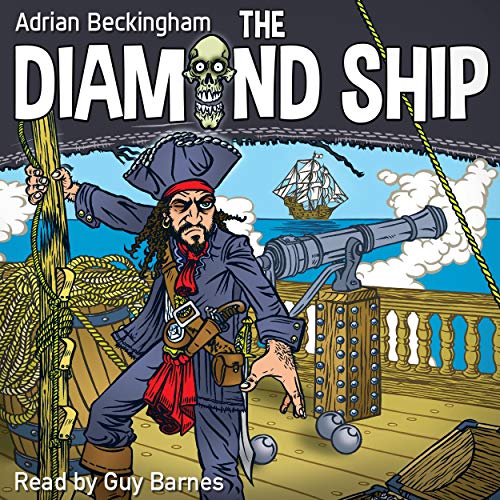 Here’s a true diamond of historical fiction that's waited 300 years to be told.

History and legend remember many pirate stories and captains - but until now not the true story about the pirate crew who seized the most valuable treasure hoard ever taken on the high seas! In the year 1721, a British pirate captain named John Taylor, accompanied by a French captain nicknamed The Buzzard, seized the richest single booty ever to come into pirate hands. Taylor and his crew of mutineers took a treasure so valuable it would have taken almost 50,000 years to earn as honest sailors. The value of the riches finally convinced the Kings of England, Portugal and France to join forces for the first time to hunt pirates down and create the beginning of the end of the Golden Age of Piracy.

The Diamond Ship follows the true journey of this band of unruly pirates, in a story which until now has lain buried for three centuries in odd pieces of parchment and random scraps of marine diaries. With the exception of three fictional characters - a pirate gunner, a girl slave turned powder monkey, and a parrot, to help carry the story - the other characters, scenes, and even many of the conversations in this riveting tale really took place.

There's not a pirate fan out there of any age who won't be enthralled with this new feast of pirate knowledge. Find out what happened as this true story unfolds, plus learn a chest full of pirate sayings and hitherto little known pirate knowledge. Recommended for swashbuckling fans, but only those who dare be pirates themselves!

What listeners say about The Diamond Ship

A rollicking tale about a real life band of pirates who scored history's richest booty, this tale is also crammed with knowledge about life on the ships.

The year 1721 band of pirates sailing the high seas, this story is true and there be a couple of fictitious characters in this audio, not overly long but if listening with children in 2 nights can be done. I just wish there was audio out when I had my children we could have listened to this in awe but instead I had to read or make up stories, the narrator really bought this to life well worth a listen young or old.

Mind blowing . Pirate Fans Will Love This. Thank you so much Adrian Beckingham and Guy Barnes.

Pirate History Not To Be Missed.

This story brings pirate life and ship life alive with the sorts of details most authors just don't bother to learn, all wrapped up in a marvellous map of hitherto unexplored pirate history. The most valuable treasure ever, yes this is the real deal.

What I’m liking about this story is there’s a lot of effort in the way the story was told. it’s about pirates and I like them because not many people now a days talk about them in this way.

I ENJOYED THIS AND LEARNT LOTS ABOUT PIRATE LIFE

My 10 year old is loving this book. He's listening to it now for the 3rd time. Here is his review:

'I have not listened to audiobooks before. We learnt about pirates at school and it was one of my favourite topics. When my mum saw this book online she got it to help me to learn, but I was not sure because I prefer online games or watching movies to just listening! But mum was right, I listened all the way through and now I'm an audiobook fan!! I can't wait to hear some more by this author. He really brought pirate life alive in my mind. I learnt all about life aboard ships, like decisions behind where they choose to sail, or how to lift anchors and what supplies they have in the hold. I like funny things like where they go to the loo! And am pleased to learn the rules sharing treasure! Pirates were mean but often they had to be, and some things were good about their pirate rules, like how often even the captain shared an equal vote with the other crew members, so even the little guy was important and had a say. This story really happened. So it helps my pirate history. I thought the only three characters the author Adrian Beckingham made up as fiction were all fun and helped the story. These were the funny Master Gunner Bert, the slave girl Ssshhh who was freed to become a pirate herself, and the colorful parrot Crossbones.

Ooops I'm sorry - NOT set sail. Pirate lingo is SHAKE OUT A REEF. Learn this and an absolute treasure trove of other pirate words and facts about ship life in this enchanting pirate true story.

RICH WITH HISTORY AND ACTION!

This is a truly fabulous pirate adventure. It traces the true story of the pirate crew who found history's most valuable haul of booty. Filled with events that actually happened, my children and I learnt lots about pirate life as well as thoroughly enjoying the story. The narrator sounded like a real pirate too. We enjoyed meeting Ssshhh the slave girl and Crossbones the parrot. The captains seemed very realistic. We can't wait for more stories like this.

My children and I have loved this story. Thank you so much Adrian Beckingham and Guy Barnes. Highly recommended.

this here aye it be worthy o' rollin' off the lips o' every schoolchild in the country and every adult too, if ye be a pirate then ye broadside be leakin' if ye be ignorant o' de story revealed herein.

A CHEST TO CHERISH.

As a devout fan of pirate stories, nowhere in my literary travels have I found another story that even comes close when it comes to learning about real life on a pirate ship. This is a feast of pirate based knowledge all brilliantly robed inside a startling true story.

What a great pirate story

Full of fun detail and lots of interesting facts! This story is perfect for the young enthusiast! The narration was so perfect that I had kept catching myself speaking in my pirate voice during our listening breaks!
This is the perfect audio book for traveling with your swashbuckling kiddos!

Such an enjoyable Listen!

As an Audiobook narrator myself- i really appreciated this audiobook. Pace was amazing and the voice work spot on.. a real enjoyable listen. The information and performance was truly engaging. Great work!

We love this pirate adventure. Told in a very engaging storytelling style. Set sail to a new adventure also rich in genuine history and knowledge about true pirates. Even sail alongside the pirate who invented the Jolly Roger skull and crussbones flag!

Whether you love pirates or have a school project on them to complete (with as little effort as possible) you'll WANT TO KEEP this book. It's a TREASURE. ARGHH

MY KIDS JUST KEEP PLAYING THIS!

And since hearing The Diamond Ship, they speak about it constantly. So good to see them highly enthused!

This author and narrator leave no splinter spare, a clean sweep on pirate knowledge in a fascinating true story about pirates!

My kids are learning about pirates at school. This audiobook is a dynamic learning aid that makes history a lot of fun and more easy to remember!

A great story that keeps primary aged children learning all about genuine pirate history , with the excitement of real life aboard the ships, lots of treasure quests and battles. It's a true story so all the better.

Aharrrr! This be a brilliant book about pirates! Full of energy, adventures that really happened and a REAL treasure to be found at the end!!!