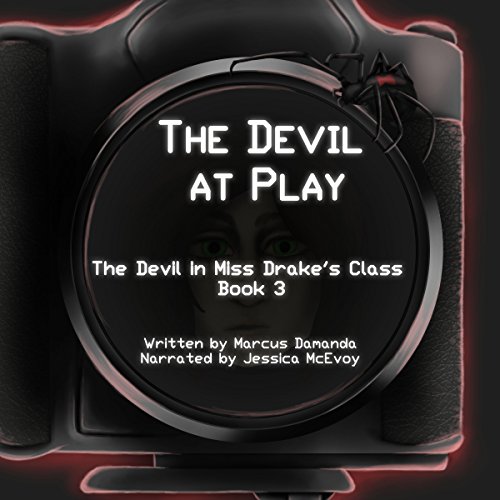 The Devil at Play

The Devil at Play

Now, too late for it to matter, Audrey understands at last. The devil of Fairview has been courting her for days, and watching her for much longer than that. The murderer is her boyfriend - and he's been killing on her behalf.

His name is Jack Maddox, but everyone calls him Mad Jack. He's planning a party, where everyone is invited, especially Audrey's tormentors - especially the Facebook 15.

Audrey will have her revenge, whether she wants it or not.

Because, in Miss Drake's class, the devil will have his due.

Loved this conclusion to the trilogy! And a shout out to the nosleep crew! Stay sleepless Marcus and Jessica!

If you could sum up The Devil at Play in three words, what would they be?

There was so much going on and I have been waiting to see how all of this craziness was going to end. Of course since I just love Audrey so much my heart was at time breaking for her, while other times I was exhilarated for her.

Wow, I came into this series at book 3.........I'm off to get the other two asap. Our hero bullied and they planning a horrible fate for her but she's saved by her ex best friend who suddenly realized they've gone too far. Unfortunately a supernatural being from the other side is upset that he didn't get her! Now it's trying to manipulate the bullies into finishing the job so he can have our hero. great narration though a little dull at times. I'd buy the rest in the series no questions.

I was provided a copy for a fair review.

I am so sad to to see this trilogy end.

I loved these 3 books! I hate to see them end. They are down right creepy.
this is an action packed book that that wraps the books up nicely. It is crazy to think what some kids are capable of. This is a great fiction cyber bully trilogy. Careful what you say and do online, it might just come back to get you, and your friends as well.

Just like books 1 & 2... 3 was amazing. Great conclusion to the book trilogy. So happy with my decision to get the trilogy.

narrator is amazing. she is the reason I bought this book. I always enjoy listening to her on the podcast she reads for and she did wonderful here.

I've loved every bit of the two previous book and this lives up to my now very high expectations of Mr. Damanda's writing and Ms. McEvoy's narration. Read or listen to all of them. Can't recommend highly enough.

I was also able to read an advanced copy, and I loved it. Fast paced, witty, fun, touching, and tough all rolled into a story with a hero that you will want to come back to again and again. It made me see that 'wrong' isn't always as it seems, and I look forward to many more nights spent with Marcus Damanda..

It was my great pleasure to listen to the Devil in Miss Drake’s class series. I received a free, no-obligation copy of these audio books.
I have to say wow to this story that is separated into three books. While you could just listen to one and enjoy it, I highly recommend reading/listening to all three to find out the final outcome and the fate of Audrey, who struggles with depression after the death of her brother and her attempted suicide that takes place in book one.
Throughout the story, “The Facebook fifteen” whose constant bullying drove Audrey to attempt her suicide—she was only spared from death because one of them realized they had gone too far and called for help. The EMT’s arrived just in the nick of time to save Audrey (back in book one) and Audrey spent three months in a mental hospital. Unknown to Audrey, the Facebook Fifteen is planning revenge for their punishments – well minus one at least, her ex best-friend, who saved her life but is not allowed any contact with Audrey. However, mental breakdown isn’t the only problem plaguing Audrey. Her real enemy is supernatural and is driving the Facebook Fifteen with taunts to get even with Audrey. This force is unhappy that Audrey has survived and considers her unfinished business…
..which is the story behind book two in which we meet Jack, the body the host has claimed to suck Audrey in (literally). However, Jack develops feelings for Audrey and has his sights set on destroying the Facebook Fifteen, picking them off one at a time… all except one, for which he has a special plan…
…that you must read book three to uncover the truth and discover the fate of Audrey, the rest of the Facebook Fifteen, and Miss Drake.
Don’t hesitate to read or listen to this series, if you like supernatural, ghostly, demonic things. The story is tastefully told, unfolds well, and has some pretty interesting characters. The narrator is an added bonus and does a great job of taking on different personas.
Thanks, Marcus for allowing me to review your books. It was a real treat.

As I previously said this series is basically for teens and young adults but I still enjoyed it as has supernatural activity .Recommend to anyone who enjoys the paranormal. I was voluntarily provided this free review copy audiobook by the author, narrator, or publisher. THANK YOU!