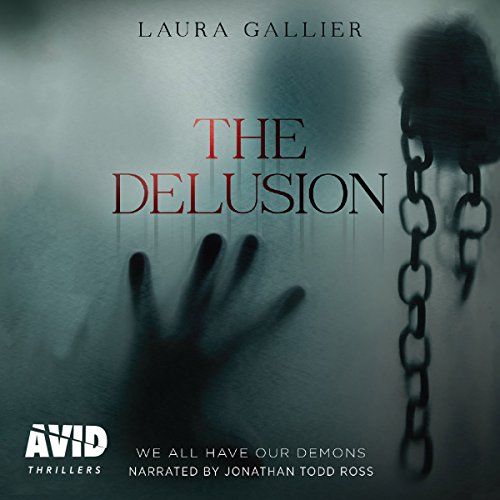 By: Laura Gallier
Narrated by: Jonathan Todd Ross
Try for £0.00

By March of Owen Edmonds’s senior year, 11 students at Masonville High School have committed suicide. Owen tries to remain levelheaded - until he endures his own near-death experience and wakes to a distressing new reality.

The people around him suddenly appear to be shackled and enslaved. Owen eventually arrives at a mind-bending conclusion: he’s not imagining the evil - everyone else is blind to its reality. Will he be able to convince anyone to believe him before it’s too late?

What listeners say about The Delusion

The Delusion is a fascinating, creative vehicle to strip away any confusion or assumptions about the truth of spiritual warfare and the big picture–evil is real and hates humankind. I would encourage all to listen and to share with those they know; I have and will continue to do so.

God is so good. Laura Gallier visited our campus for an FCA meeting and I was blessed to have been invited. I am so, so grateful that God is an intentional God and that He used her that night to speak into our lives, my life, and continues to use her through this audiobook.

The Delusion is a must read.

I recommend this book with two thumbs up. It keeps you hooked from front to back.

This story surpassed my expectations! Loved EVERY part of it. Perfect mix genres, and it has so much symbolism into the spiritual world and the Bible in such a way that's not religious at all! The story line is so intriguing it wraps you, the events fit perfectly with one another and you even feel everything the narrator transmits. Can't wait to hear part 2!

A must read for anyone. You can't go wrong with this book. Now I want more.

When I heard it compared to Frank Peretti, I got excited. However, while it was a good concept, the concept wasn't well developed enough to make you empathize with the characters. There were several issues that just didn't make sense with the timeline and/or weren't at all realistic. It was almost as though they were trying to keep the book to a certain length that didn't allow it to really develop.

Loved it! Wonderful Characters/Narrator was perfect. A must read. I didn't get bored. I finished it in less then 24 hours.

My Husband and I Both Enjoyed

My husband and I both enjoyed The Delusion. Story and narration were both well done.

This story is in the same vein as Frank Peretti's This Ever Present Darkness. I enjoyed it, but it certainly may not be for everyone. I believe in angels and demons so it's always interesting to get into the mind of others and see how they perceive such supernatural issues. I felt this one was quite creative. This would be a great book for a teenager or young adult.

Read this book if your ready to understand.

Top notch book. It exposes the lies from the enemy and what is really going on everyday. It's what we dont see that we are fighting.