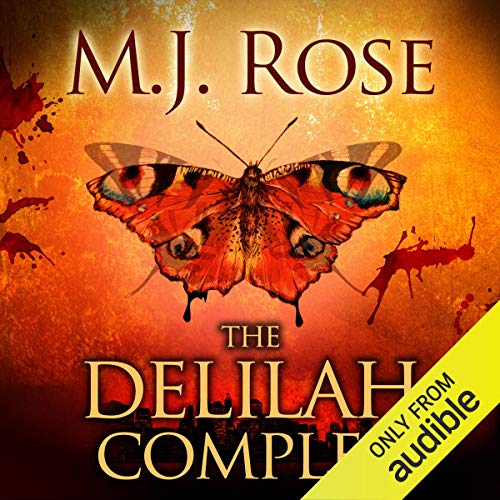 The Scarlet Society is a secret club of 12 powerful and sexually adventurous women. But when a photograph of the body of one of the men they're recruited to dominate - strapped to a gurney, the number 1 inked on the sole of his foot - is sent to the New York Times, they are shocked and frightened.

Unable to cope with the tragedy, the women turn to Dr. Morgan Snow. But what starts out as grief counseling quickly becomes a murder investigation, with any one of the 12 women a potential suspect.

The case leads Detective Noah Jordan - a man with whom Morgan has shared a brief, intense connection - to her office. He fears the number on the man's foot hints that the killings have just begun. With her hands tied by her professional duty, Morgan is dangerously close to the demons in her own mind - and the flesh-and-blood killer.

What listeners say about The Delilah Complex

My wife says, "That was awesome"

If you could sum up The Delilah Complex in three words, what would they be?

good book to while away the miles with. (the only time I listen to audiobooks is when we drive)

Could use more sex.

Would you be willing to try another book from M. J. Rose? Why or why not?

Yes. I know M.J Rose has written a series of books taking place at the Butterfield Institute featuring Dr. Morgan Snow, I'd be interested in following this character through a few more cases.

Did Phil Gigante and Natalie Ross do a good job differentiating all the characters? How?

Very much so. Both readers were thoughtful in their character portrayals.

Do you think The Delilah Complex needs a follow-up book? Why or why not?

Yes. The blooming romance between Dr. Morgan Snow and Detective Noah Jordan is just heating up at the end of the novel.

I agree with the other reviewers that said you can easily figure out who is behind the abductions, but it's still an interesting plot. And Det. Jordan is super sexy!

Power and Control with a twist

What did you love best about The Delilah Complex?

Even though I suspected who was responsible early on wasn't completely sure but never suspected how the ending unfolded.

Have you listened to any of Phil Gigante and Natalie Ross ’s other performances before? How does this one compare?

Yes, that was the second reason why I decided to listen to the book. I prefer Phil's performance on other books more than this one but maybe with someone else it would of worked.

I have not read the first Butterfield Institute book. Even though it does make reference to the outcome of the first book, I think I liked the characters so much that I will still go back and read it.

This book had strong and colorful characters. I liked the premise of a women-led sex club since it allowed for an interesting angle in how you look at women and crime and more taboo subjects. There were a few holes in the plot, but very minor.

Overall, I did like it. It was intriguing and engaging. I bought it on sale, so it was worth it.

Lifetime movie of the week??

This was not the best or the worst book I've ever listened to from Audible. I love Phil Gigante and Natalie Ross together (the sole reason I purchased this book). I'm giving this more stars then it deserves due to the narration alone. I think the author was trying to be shocking or provocative with the subject matter but it just felt forced or fake to me. I kept thinking this would make a perfect Lifetime movie of the week. Thankfully it was a quick read with great narration.

What made the experience of listening to The Delilah Complex the most enjoyable?

I highly enjoyed listening to the narration by Natalie Ross and Phil Gigante. They made the interesting plot even more suspenseful to listen to.

As I'm mostly listening to audiobooks while commuting in the morning and evening, the more "hotter" sequences were actually very enjoyable and made me forget the stress of the day or the one ahead.

On account of a very interesting plot, which I did not expect (although I'm an avid crime fiction reader/listener), I have to say that the parts dealing with the mother-daughter relation between Dr. Snow and Dulcy have actually nothing to do with the unfolding of the story. They are not really connected to what is going on and you can skip listen through them. Given the set of the story and the adult content, I don't really think the dealings between a mother and her 13 year old daughter becoming an actress or not, don't help the story or plot in any way. Having said this, if the daughter would already have to deal with a serious crush or maybe a first sexual experience that would have been a much more interesting side plot to follow.

Narration was Awesome but Story was Huge Fail

A better, more believable story. Perhaps told in 3rd person also. Not having a TSTL heroine who puts others in danger because of her actions.

Would you ever listen to anything by M. J. Rose again?

Probably will listen to next book if can find at public library just to see what happens next.

Which character – as performed by Phil Gigante and Natalie Ross – was your favorite?

If you could play editor, what scene or scenes would you have cut from The Delilah Complex?

The last scene as well as all scenes mentioning butterflies. I'm not sure why butterflies are so important to Morgan and possibly the story. Maybe I missed the reference at some point.Also, I would cut way down on Morgans' soliloquies. Her constant introspection gets very wearing and boring.

What's left to say? I read the first book, The Halo Effect, and mostly enjoyed it though I had some of the same problems I had with this book (excessive introspection and sometimes whininess on the part of Morgan). Morgan Snow, for the most part, seemed to be a sensible and intelligent person who was doing her best to raise her daughter, Dulcie, and go on with her life after divorcing Dulcie's father.My main problem:If I'm reading a contemporary mystery, I have to be able to believe, with not too much of a stretch, that some actions, though they might not WOULD happen, COULD happen especially when you are talking about medical professionals, and especially medical professionals who may deal with potentially violent patients/clients. There were numerous times in this book that Morgan, as a psychotherapist, put herself and others in danger while dealing with obviously unhinged patients. She even at one point seemed to ridicule someone who was being threatened by a totally unhinged person wielding a pair of scissors and couldn't understand why he didn't simply take them away from the wielder. Another time, she instructed her receptionist to call 911 on an obviously disturbed individual who might or might not have been the murderer (he was obviously drugged out and continually brandished a razor blade) then she allowed her obviously frightened receptionist to walk into her office to deliver a pitcher of water. After the patient was taken away, Morgan's boss, Nina, dresses her down for calling the police AND not disarming the guy with the razor blade. Huh? Her explanation is that since they are, of course, trained in self-defense and karate, then she should have done this instead of calling the police (Nina has an unreasoning hatred of cops which makes me wonder how good a therapist she actually is).

Add to this the extremely unprofessional behavior exhibited by Morgan: Going to a client's (who may or may not be involved in the crimes) house for sessions and knowing a HUGE secret about another client (again, who may or may not be involved with the crimes) and not calling her on it let alone encouraging her to come clean with police and her employer. Some other minor problems I've got: Morgan's obsession with butterflies (maybe I missed the reason for this?), Morgan's obsession with her sense of smell (this is mentioned constantly throughout the book), Morgan's weird empathic link with her daughter (she always knows when she's got a headache, tummy ache, what she's thinking, feeling, blah, blah, blah).

It boils down to this story trying to go too many directions at once with the result being a thin plot that gets bogged down in too many unimportant points, a not-that-hard-to-figure-out bad guy, and a, ahem, not too terribly climactic ending. And butterflies.

A great addition to the series

An entertaining read, with more of the same from the first book in the series: a series of crimes needing to be solved by Detective Jordaine, et al. and somehow requiring the Morgan's skillset as a sex psychologist. Overall, I particularly like Noah Jordaine as a character and I always look forward to his chapters, though Morgan gets a bit repetitive at times. That said, I'm definitely looking forward to the next book. (Note: I listened to this as an Audible audiobook: the narrators' performances was even better than the first book and is one of the key reasons I look forward to the next novel!)

I have read other of Rose's works, and this one did not dissapoint. The possibility of women as the powerful agressors is intriguing. Throught my life, I have changed my naive belief that all wome nurturing creatures, and if the world goverments were left to their power, women would never turn into predators, and they would take advantage of their possitions, or at least not mostly.

Whereas the story line might be exagerated, it is thought provoking.

Would you recommend The Delilah Complex to your friends? Why or why not?

Do you think The Delilah Complex needs a follow-up book? Why or why not?

The series as a whole needs one.

I would have rated it higher, hadn't it been for all the vivid descriptions of torture. I could have done without them, and, I would dare to say that the value of the total experience would have increased.

This is only my opinion, and while I like to read this genre, I find too much gore detracts from the entire experience.