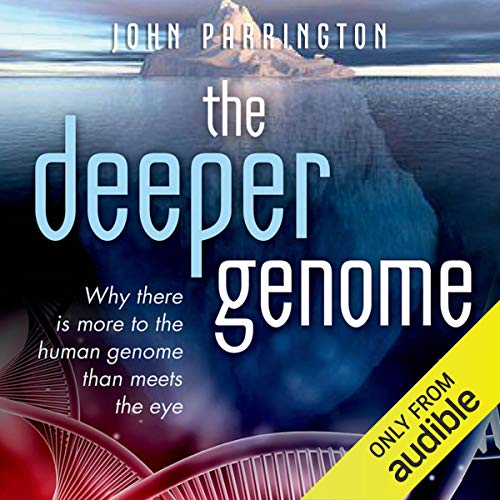 By: John Parrington
Narrated by: John Lee
Try for £0.00

Over a decade ago, as the Human Genome Project completed its mapping of the entire human genome, hopes ran high that we would rapidly be able to use our knowledge of human genes to tackle many inherited diseases and understand what makes us unique among animals. But things didn't turn out that way. For a start we turned out to have far fewer genes than originally thought - just over 20,000, the same sort of number as a fruit fly or worm. What's more, the proportion of DNA consisting of genes coding for proteins was a mere 2 percent. So, was the rest of the genome accumulated "junk"? Things have changed since those early heady days of the Human Genome Project. But the emerging picture is, if anything, far more exciting. In this book John Parrington explains the key features that are coming to light - some, such as the results of the international ENCODE program, still much debated and controversial in their scope. He gives an outline of the deeper genome, involving layers of regulatory elements controlling and coordinating the switching on and off of genes; the impact of its 3D geometry; the discovery of a variety of new RNAs playing critical roles; the epigenetic changes influenced by the environment and life experiences that can make identical twins different and be passed on to the next generation; and the clues coming out of comparisons with the genomes of Neanderthals, as well as that of chimps, about the development of our species. We are learning more about ourselves and about the genetic aspects of many diseases. But in its complexity, flexibility, and ability to respond to environmental cues, the human genome is proving to be far more subtle than we ever imagined.

What listeners say about The Deeper Genome

Yes, immediately. The narrator-John Lee- in my view, doomed this presentation from the start by using an unnecessary theatrical style with glottal perturbances extremely of -point for this type of work. Heres an example. Take a multi-syllable word : shout the first syllable as if on stage, then lightly whisper the next two at high speed. Do this over and over all throughout the book. You get the point. I found myself hitting the reverse button time after time to try to catch those faintly whispered nothings after recuperating from the bling of the first syllable blasted like a sharp report. It's true that the American ear is often not adapted to the nuances of the mother tongue, but am I correct in sensing a lot of Scottish churn charged up with theatrical training here? It doesn't matter- I'll not follow him in the future except perhaps on the Shakespeare classics front if that ever happens.One more vexing verbal twitch to mention, and this stems from the authorship: the most overused word in the entire treatise is "however". You'll hear it shouted, hurled in a snippish manner, used to lead off hundreds of sentences, over and over and eventually this became a form of verbal torture. Surely there are more varied ways to introduce sentences.However, this would have been a great book otherwise, however.

Disregarding the interruptive delivery discussed above, John Parrington ably constructed a plausible explanation of current views on the subject and nicely integrated historical context all the way along. I have a deep background in biological sciences so the terms and concepts were easily understood, though new in so many cases for me. Just learning the dynamics of histones made it all worth it. That was refreshing, and yes I'm kind of a science nut.

Who would you have cast as narrator instead of John Lee?

I can't imagine how this could be presented as a movie unless as an educational theme with explanatory three- dimensional diagrams and Uma Thurman acting it out in some Sci-fi co-opt.

If you're prepared to bear up to what was, in my opinion, a disruptive narrator I would recommend this book highly. The information therein is solid gold. You may come away with a revised view of genetics and biological evolution. I know I did. I would hope that Dr. Parrington will quickly write on other topics in the future along these lines, as well as to further expand on today's current vital quest to dig more deeply into genomics.

Genome-Just what is it? Described and more

Well written history of Genetics & Molecular Biology, detailing the important events and key people, explained at a basic biology level with a pleasant narration. Throughout the book, technology and scientific advancement are discussed which leads to what we know and more importantly what is not known and what the future may bring. I was disappointed that the book did not discuss the latest new big breakthrough in gene editing, CRISPR. I think this is important enough to have delayed publishing of this book or addressing through a late edition in an epilogue. If this book interested you, you will want to followup on CRISPR. Be sure to get the free accompanying figure as a PDF file by using the link at the time of purchase.

Terrible audio quality. The distortion made it even harder to follow the narrator's mediocre reading and his occasional truly odd pronunciation of terminology. My only criticism of the content is that I was a bit amused at the author's apparent obsession with when all the important players were awarded their Nobel prizes. Other than that, it was a good review of the subject from a knowledgeable insider.

I thought there was a lot of good material well presented. But I'd recommend getting it as an ebook rather than an audiobook.

I'm finding lately that novela, social sciences, and "great courses" move at an appropriate pace for an audiobook. Heavier science books work better when uou can read them at your own pace, absorb the matetial, and reread a bit as needed.

amazingly good and very literate.
the author knows biology on the deep level.
the history is presented well

very scientific, lots of data, not an easy listen

Took me a bit of a while to figure out why I'm having a problem with this book.
The book does contain a lot of scientific data, quotes and facts but the problem is is that it uses too much of a high language and quotes and scientific words that I found it really hard to follow it while driving.

I was looking for a simpler more of a story book.
Not that I have a problem with the English language but I was looking more of a simple fact like: research found that this do that
instead you get a lot of: "R-Transdocers encode DNA, the epigenetic changes influenced by the environment and life experiences"
and lots of other sentences similar to this (this isn't an exact quote, just an example) which makes it very difficult to follow the audio book while driving.

Also the explanation for genes changing between generations is explained only on the last 1/3 of the book. (an example is given about Holland in ww1 or 2 that the population were starving and they've discovered that pregnant female that were starved gave birth to children who were more inclined to obesity, even their grandchildren still have this gene inclination)

Were the concepts of this book easy to follow, or were they too technical?

This is a fascinating book about molecular biology. When I was feeling comfortable with some dogmas about inheritance and expression of DNA, we now receive a boost on epigenetics, regulatory switches, as well as how active the so-called "junk DNA" is. Life, biology and the understanding of diseases require much more from our attention.