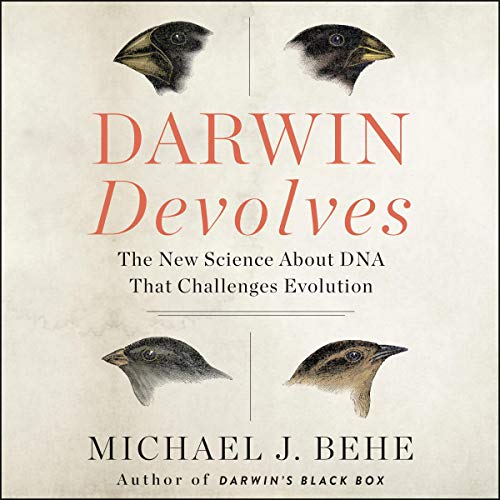 The scientist who has been dubbed the “Father of Intelligent Design” and author of the groundbreaking book Darwin’s Black Box contends that recent scientific discoveries further disprove Darwinism and strengthen the case for an intelligent creator.

In his controversial best-seller Darwin’s Black Box, biochemist Michael Behe challenged Darwin’s theory of evolution, arguing that science itself has proven that intelligent design is a better explanation for the origin of life. In Darwin Devolves, Behe advances his argument, presenting new research that offers a startling reconsideration of how Darwin’s mechanism works, weakening the theory’s validity even more.

A system of natural selection acting on random mutation, evolution can help make something look and act differently. But evolution never creates something organically. Behe contends that Darwinism actually works by a process of devolution - damaging cells in DNA in order to create something new at the lowest biological levels. This is important, he makes clear, because it shows the Darwinian process cannot explain the creation of life itself. “A process that so easily tears down sophisticated machinery is not one which will build complex, functional systems,” he writes.

What listeners say about Darwin Devolves

For those of us brought with soft biological science, the assumption is that the theory of evolution and NeoDarwinism accounts for life on earth - anything but! It is time to rethink. This book challenges those assumptions
People who believe that life begins and ends on this planet are living in very small world!

Michael J. Behe is akin the biblical prophets who tried to convince a pagan people to return to God. Back in those days the prophets were routinely murdered, while the crowds applauded.

I commend Behe for his works, but those who have made a conscious decision to reject God will rarely admit their foolishness and return to God. Nevertheless, a prodigal may occasionally return, as for the rest, God will have the last word.


Romans 1:18-19
18 For the wrath of God is revealed from heaven against all ungodliness and unrighteousness of men, who suppress the truth in unrighteousness,
19 because what may be known of God is manifest in them, for God has shown it to them.

Not only is the reading clear, but the content is clear as well. To top it off, the chapters are listed with title and content. No more bookmarking chapters in the notes so you can return to a particular content. This is the only audible book to have provided it. Thank you!

Great info, but a little redundant

I love ID, and really like books that show the shortcomings of neo-darwinism, but like many ID books out there, Behe could be a little more succinct.

If it’s foolish he calls it foolish

At.a level everyone can understand.

Darwin Devolves builds upon Behe’s arguments in the Edge of Evolution after a decade of experimental research has weighed in. The verdict: both mutation and natural selection are reductive. Instead of generating new function or genetic information, selection and mutation delete function and mute pre-existing genetic information. As Behe shows, evolution needs to be more than reductive to explain the diversity of life. It needs a mechanism that can produce all genetic information on earth. Instead, as demonstrated by lab experiments, the Darwinian mechanism consistently comes up short. Even more damaging, as mutations accumulate, species becomes more brittle and less adaptable. This is a nightmare for Darwinism. Behe also examines rebuttals to his first book, Darwin’s Black Box in the light of more than 20 years of research. Well written and highly recommended.

A gem of highly accessible science

This is a very thorough, balanced approach to understanding the implications of genetic information on the design and origin of life on Earth. The author not only explains the concepts thoroughly and both laymen's as well as biological terms, but he also is honest enough to review the work of his critics and allow the reader to draw conclusions.

Behe has given critical information in his book that seems to be ignored and for good reasons. He has challenged the sacred cow of science, biological evolution driven by random naturalistic processes. With no solid answers for a rebuttal, the scientific community has opted to keep quiet, a wise decision on their part.

Not for the faint of heart

Unless you are ready to have the foundation of what we are told challenged, don't buy the book. If you want logical, evidentiary and big picture thinking... then this is a must read!

When we are constantly bombarded by an education system, entertainment industry, and biology field that are all extremely over filled and represented by atheism and evolution, it is vital to read this and other ID writers in order to get a true perspective. Behe cuts thru the rhetoric, bluster, and shell game foisted upon us and allows us to see the true paradigm.

This is my second book of his. I now want to listen to Darwin's Black Box, and complete the trilogy!