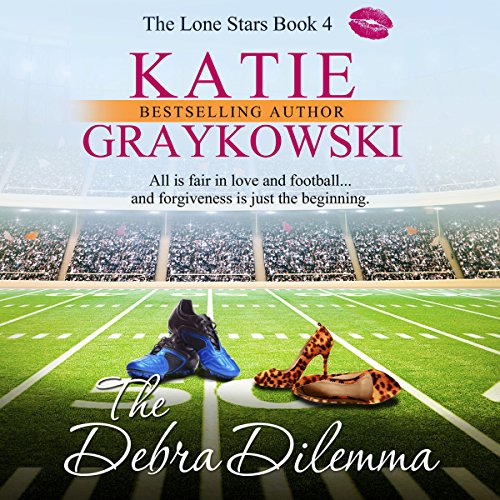 By: Katie Graykowski
Narrated by: Pam Dougherty
Try for £0.00

Debra Covington is finally getting her life together. She's spent the last 10 years making Warren Daniver pay for choosing a million dollars over her. Her plan of sport-dating the entire football team that Daniver owns has backfired and the only one she's hurting is herself. Now, she works at Safe Place helping victims of domestic violence.

Warren Daniver has a problem. Debra Covington is no longer making his life a living hell and now, he can't stop thinking about her. Ten years ago, he took her father's money to keep from ruining her life. Warren has regretted taking the money every minute since he cashed that check. It's time he told her the truth...only she refuses to see him.

The harder Warren tries to insinuate himself into Debra's life, the harder she resists him. Their mental tug-of-war comes to a head when Warren learns that when he left all of those years ago, Debra was pregnant.

Can she ever forgive him? Can he forgive himself? Warren will stop at nothing to finally solve The Debra Dilemma.

What listeners say about The Debra Dilemma

I so enjoyed listening to this book! I loved how the narrator (Pam Dougherty) was able to give so many characters distinguished voices and able to put so much into her performance. This book is part of a series and a standalone listen. I thought the author did a great job at developing the characters and had some surprising twists. My review is not a synopsis of the book, but rather my opinion of it. I was provided with this audiobook at my request and have chosen to write this review. I will definitely look for more books by both the author and narrator.

This is a great book; this is the fourth book in the Lone Star series written by Katie Graykowski and narrated by Pam Dougherty. This book can be read as a standalone, but once you read this one you will want to go back and read the other books in this series. Debra Covington has spent the last ten years trying to make Warren Daniver pay for choosing a million dollars instead of her. She has dated the entire football team that Warren owns. When she ends up in trouble she knows she needs to get her life in order. She is now working at Safe Place helping victims of domestic violence. Warren Daniver is the owner of the football team, and now that Debra is no longer around the team he can’t stop thinking about her. He wants to tell her the truth about the money but she won’t talk to him.

This is a great book with a wonderful story and well developed characters. The story flowed very well and was very enjoyable. This book will keep you reading long into the night and you will not want to put this book down until you finish. This was such a great read and full of surprises.
The narrator did a wonderful job with this book. She did a great job with the different voices of each character in this book. It was very easy to listen to and I didn’t want to stop listening until the end.

If you are looking for a great book with well-developed characters then you need to listen to this book. I am looking forward to listening to the next book by this author and narrator.

Over a ten year period, Debra punished and blamed herself over things that happened. Now, thanks to some new found friends, she has finally begun to accept her past and move on, but can Warren fit into her new future.

There were a few scenes that seemed a little far fetched to me, but all in all, Katie Graykowski tells a good story.

This was the first book I've read by this author. Overall good story-fun escape from everyday life. A bit over dramatic and drawn out at times, but left me wanting more of these characters!! Please continue to create more stories....I am definitely a fan!!!!