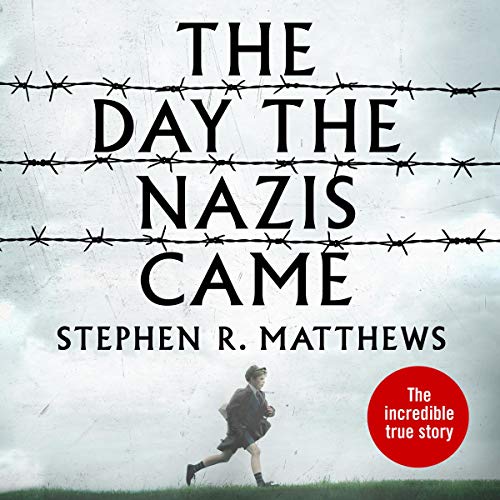 The Day the Nazis Came

By: Stephen R. Matthews
Narrated by: Barnaby Edwards
Try for £0.00

By the time he was six years old, Stephen Matthews had been bombarded by the Luftwaffe and deported from occupied Guernsey along with his family to a prison camp in the heart of Adolf Hitler's Third Reich. He had seen men die in front of him and walked with Jews straight off the cattle-trucks from Bergen-Belsen. He had nearly drowned, been menaced by Alsatian guard dogs, beaten by a member of the SS, stranded in a minefield and had his hand broken by a German guard for attempting to feed Russian prisoners.

The family kept going through imprisonment, held together by their will to survive and their love for each other. But the island home they eventually returned to had been scarred and stricken by Nazi occupation.

The Day the Nazis Came is an utterly unique memoir, depicting the world of Nazi prison camps through the eyes of a child - a world in which the real dangers often seemed trivial and every day was a new adventure. Above all, it pays tribute to the preciousness of hope and shows that human kindness may flower in the unlikeliest of places.

What listeners say about The Day the Nazis Came

Brilliant story had me curious from the start loved it, thought the little boy brilliant

This book is horrid as it makes out the camps were not that bad , maybe for these people it wasn't too bad . In 99% of the camps it was hell on earth , most people who went into the camps died. I found the book made me terrible and guilty for listening to it . I would NOT recommend reading or listening to this book.

A fascinating account of a young boy’s experience of first living under Nazi invasion then transport to and life in a German prisoner of war camp. At times harrowing, the autobiography also demonstrates the humanity of many of the Germans who were forced to endure the cruelty of the Nazi regime. However, sadly it also shows the dark side of human nature on both sides of the conflict, both in Germany and later upon the family’s return to Guernsey after the
Iteration. It is well worth listening to/ reading.

Couldn’t get into this

This is a deeply sentimental family history. The writing is mannered and the narrative self-regarding. I wondered at one point if this was not ‘vanity publishing’.
There is an interesting story to be told about this aspect of WW2, however, this book does not provide it.

As someone who has family in Guernsey and has visited the Channel Islands, I enjoyed visualising places I know as they were under German occupation. The book is split between life on Guernsey and life in Germany in various camps, it brings to life the experiences of the author. An enjoyable and thought-provoking listen.