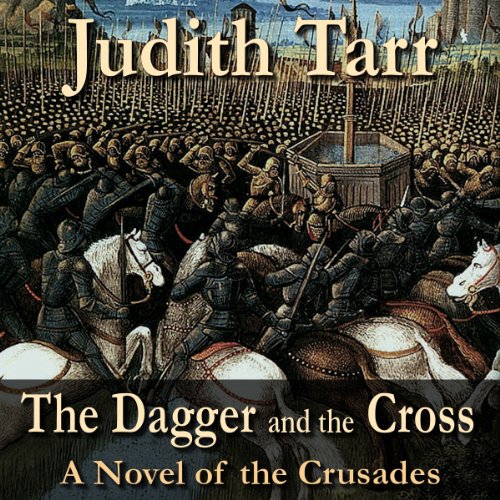 The Dagger and the Cross

By: Judith Tarr
Narrated by: James Patrick Cronin
Try for £0.00

Fantasy writer Judith Tarr knows her history - she has a doctorate in Medieval Studies from Yale - but she also knows how to enhance what really happened with her own inventions, such as the elves who help populate The Dagger and the Cross. The sequel to Alamut that takes place in the same universe as The Hound and the Falcon, this story takes listeners back to the Crusades where real historical characters like Baldwin IV and Saladin interact with Tarr's elf Prince Aidan and King Gwydion.

Actor James Patrick Cronin has a young, earnest voice that lends soft emotion to the audiobook's romantic conflicts and breathes boyish fervency into its dangerous clashes.

In the time of the Crusades, in a world at war, a prince of immortal lineage and a spirit of fire who was once an assassin prepare to celebrate a royal wedding. But he is Christian and she is Muslim, and there are those who hate them not only for their disparate faiths but for their power and magic.

From the holy city of Jerusalem to the bitter battlefield of Hattin, from Saladin's Damascus to the Crusaders' fortress of Acre, the tides of war sweep the lovers apart. Even magic might not be enough to save them, or the kingdom to which they have both pledged fealty.

What listeners say about The Dagger and the Cross

"Afterwards" to the fabulous Alamut

Tarr is a real master of historical detail and the creator of a magical past that is internally consistent and complements the scholarly past seemlessly. In the Dagger and the Cross, she returns to the Crusader Kingdom and displays her understanding of political pressures in both the Christian and the Islamic worlds. The dilemma that motivates the action -- the need for a papal dispensation for marriage between a nominally Christian mage prince and a half-wild Muslim afrit -- does not have much emotional force, but the supporting characters are strong, the sociological framework is credible, and the spiritual evil of intolerance in the Inquistors is satisfyingly threatening.

This book is a sequel to Alamut, and essential listening for those who treasure that brilliant work of fantastic historical imagination.