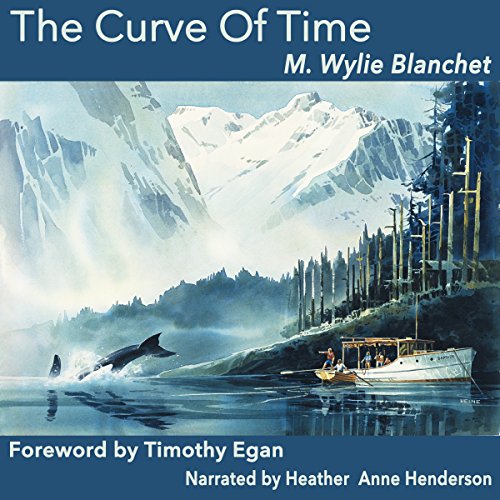 The Curve of Time

At a time when Vancouver Island was still an extremely remote and sparsely populated backwater, a young widow packed her five children into a 25-foot boat dubbed The Caprice and set off on an adventure. Summer after summer the brave young mother, who became known as "Capi," would set sail and explore the rugged coastline for months with her young crew. Although the hazards the family faced were numerous-tides, fog, storms, rapids, cougars, and even grizzlies-Capi brought them through it all. The Curve of Time is Capi's poignant, thoughtful, and poetic recollection of these days.This classic coastal tale has been a bestseller since it was first published in 1961. That was also the year of the author's death. In print continuously since it's original publication, this is the first time it has been made available in audio.

What listeners say about The Curve of Time

A Memoir Of Life As An Adventure In Nature

I really enjoyed this collection of sailing and wilderness stories and memories from life in the 1920's and 1930's on Vancouver Island. The author, Capi and her five children spent four months every summer living on and sailing their little boat. They explored a waterway known as the Inside Passage between coastal British Columbia and Vancouver Island.

The book is filled with wonderful descriptions of sailing, the sea, wildlife and the people they encountered on their travels. Blanchet works a good deal of the history and the mapping of the region into the stories. Plus, their frequent visits to abandoned stone age native villages added depth and a feeling of spookiness and folklore.

Time gets lost in these stories which are really snapshots of wild nature experiences--not linear travelogue journal entries. While it is difficult to pinpoint dates, ages of the children and when the action occurs--in the end it doesn't matter. To me, the way Blanchet tells the story is perfect. The author captured her unusual adventurous life beautifully. The listener comes away with a strong feeling for and understanding of a life lived right on the very edge of wildness. Engaging.

This Gem Is For You If You Love Adventure

M. Wylie Blanchet wrote this memoir in 1961 when she was 70 years old. It is not to be missed if you love adventure, nature, and the sea. After her husband died and left her with 5 young children, the author would take the family's 25 foot boat out each summer, from June to October, up and down the British Columbia coast with the children. They anchored in little known coves, camped and barbecued fresh caught fish on the beaches, climbed the cliffs, met and visited with the locals, of whom there were not very many, and yet all of whom were truly memorable.

'Capi', as she was known, as captain of the Caprice, gave her children the most amazing summers and adventures imaginable. Capi skirted and maneuvered dangerous inlets, climbed slippery moss covered granite, dealt with a sick and injured child, and always seemed to rise to the occasion. When the boat engine faltered, she either fixed it herself or rowed the boat to a harbor from their dinghy. She was amazingly capable. She was a wonderful mother. I envied and admired her as she described each adventure, one after another. I, myself, am not comfortable around the sea and not very brave when on my own. I so wish I could be more like this amazing woman. I wish I could conquer my fears.

The narration of this book is just about as perfect as I could have hoped for. Heather Henderson captured the personality and voice of Capi to a tee. She added greatly to my listening pleasure and fun.

The Curve of Time was Blanchet's only book. Supposedly, this book has never left the top ten favorite lists in British Columbia since it was written. It is now on my top ten list of favorites, and I know I will listen to it again. I loved it that much!

I loved these boat adventure stories of a mom & her kids. These are from a time & place so remote from mine, it is almost like fantasy. Also there is a lack of sort of basic, supporting detail, that makes the characters & story seem less anchored in the actual world. How did they get their money? Which kids were on which adventure? What was the mom feeling? I felt I wanted more of a connection with her. Or so that I can buy a boat and move to BC. Nevertheless, I loved the stories!

Also, this is funny, I can't put my finger on exactly what it its, but when the children talk, its like listening to an old Shirley Temple movie. Or The Wizard of Oz. Why, she's not a witch at all, Mummy!

Children's voices don't work for me

Too sweet and precious. The baby talk is distasteful. Otherwise splendid performance. Story is wonderful.

what a fun ride.

what a fun little ride. I wish it were possible to do this with my kids. instead I'll work a 40 hour week until I drop. Maybe take the kids to the beach every other year. Listen to this book it Is Well worth your time. The narration is way above average. Thank you.

What did you love best about The Curve of Time?

Through the detailed memoirs of M. Wylie Blanchet the listener is transported back through history to a much simpler time where they have the opportunity to share this families adventures, meet people and have laid before them scenes which have been lost forever. The author’s knowledge of nature and the world around her makes this an absolutely delightful book to listen to and Heather Henderson’s voice completely compliments the story.

This is a lovely story about a young widow and her five children who spend their summers exploring the west coast of British Columbia in the 30’s and 40’s, then return to their isolated ‘Little House’ on Vancouver Island for the winter.

a glorious escape from real life

Lyrically beautiful landscape, adventures, writing. Outstanding narration. I will turn around and listen to it again right away, and probably buy the book, too.

How a tragedy affects us all depends very much on our attitude towards life itself and the way we look at the world around our lives. The stories with which Mme.Blanchet entertains her listeners/readers are delicate, sweet and compelling. They are inspirational as well, coming from a bygone era when the values of the day where, in fact, virtues, and as such, very distant from what we are forced to live with nowadays.

I was all set to read this one as an ebook, when as one of those "universal" coincidences the publisher offered me a copy of the audio edition. Very kind of them, and in no way influences my opinion of the story itself.

If you're looking for a "clean" (G-rated) read, this one's for you - there were a couple of chapters that I found a bit ... cutesy, perhaps, though they fit in with the overall work (fairy-tale style rather than actual events). For the most part each chapter concerns a specific location visited, or potentially dangerous situation faced on the water. For those who like spooky tales, I found their visit to a deserted native village plenty spine-chilling.

Definitely a recommended read, especially for those interested in maritime adventure or Canadian history (Canadiana). I found the audio narration truly outstanding, one of the best fits I've run across as a veteran listener; I had to regularly remind myself that it wasn't the voice of the author herself!

Could really do without the baby voices

The story so was nice, full of adventure, and local references to areas in the Pacific Northwest. What bothered me a lot with the narrator attempting to do baby voices for the two youngest children, super annoying.