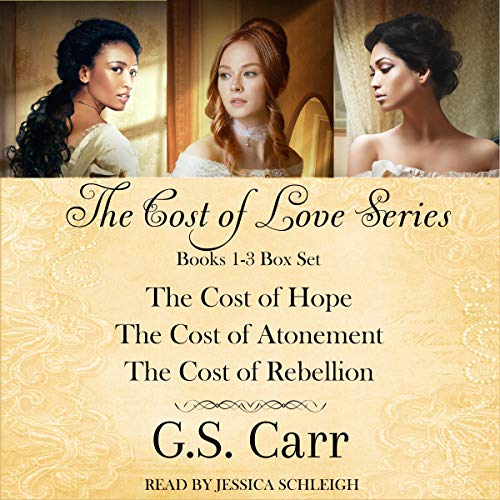 "Carr's attention to emotional detail, be it the caustic dialogue of the antagonists or the tender interactions between the lovers, is certain to resonate with readers." (BookLife Prize Judge)

"This well-told historical romance is intense and powerful." (Publishers Weekly)

This boxed set contains the first 3 books in the Cost of Love series!

What can a former slave without a penny to her name and no memory beyond the last five years ask from life? Soleil has no delusions of living a grand life. Or even a happy one for that matter. The only thing she wants is safety for her daughter. But when even that seems impossible she takes matters into her own hands. Only life has a different plan, sending her into the arms of a handsome plantation owner. The strangest part is, he claims to already love her.

Alexander Cummings had long ago accepted that love was lost to him. After picking up the pieces of his broken heart, he threw himself into the duties of owning one of the largest plantations in Elba, Alabama. But life shows him mercy when the woman he thought he lost appears back in his life as if conjured from his deepest desires. Only she returns far from the same and with secrets he never imagined. As society threatens, and lives could be lost, only together can they both get what they want. But neither will come out unscathed and they must ask themselves, is the cost of love to high?

The Cost of Atonement - Book 2

Can’t a lady dedicate her life to serving others without the encumbrance of a husband? A year ago, Virginia’s closest friend was kidnapped and sold into slavery. Since, then she has dedicated her life to the abolitionist efforts and fighting for change in America. But when an opportunity to be a Conductor comes wrapped in the condition of marriage, Virginia finds herself giving in to the one thing she swore she’d never do- after all, even if society frowns upon it, separation is always an option. Only, as time goes on, she finds the though of leaving the marriage less and less appealing....

Charles remembered her the moment he saw her. The feisty young woman who had demanded he dance with her at a party the year before. Only now she wants nothing to do with him. That is, until she realizes he can make an opportunity she’s dying to have a reality. Yes, he is allowing her to use him, but Charles has plans of his own- which don’t include letting her go. In the midst of a country immersed in Civil War, can two people entangled in a marriage of convenience find the grace and forgiveness needed for real love?

The Cost of Rebellion - Book 3

Hope Cummings had no interest in the ordinary life of a proper English lady, no matter how much her mother wished she would. Milling about London attending balls and visiting with high born ladies who though more highly of themselves than they ought, held no appeal. She'd rather be sailing the majestic ocean with her father and brother or embarking on adventures. Anything other than preparing for the inevitable fate of being a wife and mother. The answer to that wish comes sooner than she expects, in a form she never saw coming. Shaeen Almasi came to London with one thing in mind. Revenge. Only nothing goes according to plan. Wounded and trying to make his way back to his ship, he receives aid from a stunning young woman.

What listeners say about The Cost of Love Boxed Set: Books 1-3

I'm a huge fan of historical romance so these books were just great for me. I do agree with the ither reviews that the order seemed a little off but not enough to be an issue. Still loved them all. Recommended.

I absolutely LOVED these books. I will be honest and say this kind of book is not normally my cup or tea, but I literally couldn't stop listening. I just needed to know what was going to happen next. I love how relevant the story line is given the fact it's set so long ago. Many of the major themes can still be found in our culture today. I would recommend these books to anyone looking for an adventure of the mind and heart.

Loved these three books. Narrator was great. I thought the order was a bit off.

G. S. Carr is a new author to me and I was pleasantly surprised, excited and impressed with these historical romances. I loved how each individual story contained factual information with romantic twists! I found myself becoming angry about certain situational circumstances and had to step back for a few days to complete the remaining stories. After the trials and tribulations endured, it was refreshing to know that a Happily Ever After was obtained for them all! Jessica Schleigh was also a new narrator for me and she did a good job with her performance.

I have never read romance outside of fantasy but I adored these stories! I really like history, and while this wasn't so much based on actual events (that I know of), the time period is probably pretty accurate. Each story included a major twist that makes you hang on to the edge of your seat or wrings the emotion out of you. The couples each faced hardships and tribulations to be with each other and were so moving. It made me love love again. Color and race was a theme throughout the book but it didn't over power the story, it created perspective and depth that made the characters and their stories so much more heartwarming.

The first book had me yelling at the author because of a scene that I could not believe would be the outcome of Alex and Soleil's struggles! But she thankfully made me forgive her not too long after. As there is much happiness and love, these stories are not without tragedy, loss, and disgusting behaviors that were common at the time. The last one was my favorite as it was filled with more adventure and less heartache than the others.

I loved that it was a box set so I could keep binging through the stories. They really were so lovely and I highly recommend them!

Loved this series! The love and emotional adventures! To a mother's love of her child. Narrator was awesome!

I usually do not like trilogies but this one was really held my attention. No fluffy recap chapters just right into story. I’m not going to spoil it for new listeners. I’ll just say if you looking for adventure, surprises and heart tug moments The Cost of Love Box is worth a listen. BTW the narrator was amazing.

The box set of Cost Of Love are very enjoyable historical romance stories. All the stories tie together beautifully.