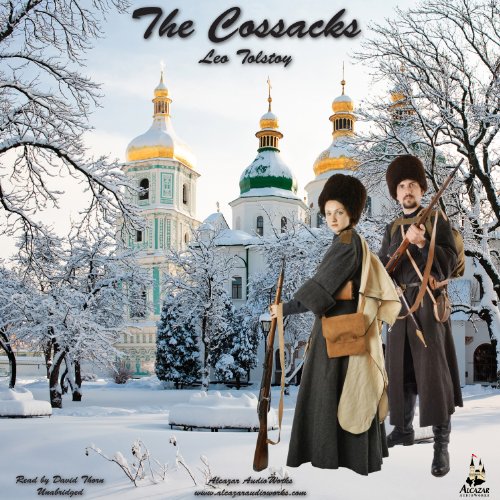 By: Leo Tolstoy
Narrated by: David Thorn
Try for £0.00

Tolstoy's first novel and acknowledged as one of his best. The Cossacks is based on Tolstoy's own forays into the Caucasus, abandoning his aristocrat life of gambling and carousing in Moscow and volunteering to be attached to the regular army. Leo Tolstoy's firsthand insight to the magnificent landscape and the colorful Cossack way of life is lushly descriptive, in a text translated from his manuscript by close friends.

Olenin is an aimless young nobleman who is disenchanted with city life. Taking a post as a Cadet in the army, he finds himself assigned to the remote Cossack outpost in the Caucasus. It is here, among the Tatars, the Chechens, and the Old Believers, that he will fall in love with a beautiful Cossack girl. The only problem is that she is promised to a Cossack warrior.

In the setting of what is present-day Kazakhstan, Tolstoy examines two psychological problems. The first is the dilemma of a young man who desires both fulfilling love and a place as a respected member of society. The other is the difficulty of a primitive society to accept domination by a higher culture that has no understanding of the traditions it asks its colonists to cast aside.

Leo Tolstoy (1828–1910) was born in 1828 about two hundred miles from Moscow. His mother died when he was two, his father when he was nine. His parents were of noble birth, and Tolstoy remained acutely aware of his aristocratic roots, even when he later embraced doctrines of equality and the brotherhood of man. After serving in the army in the Caucasus and Crimea, where he wrote his first stories, he traveled and studied educational theories.

In 1862 he married Sophia Behrs and for the next fifteen years lived a tranquil, productive life, finishing War and Peace in 1869 and Anna Karenina in 1877. In 1879 he underwent a spiritual crisis. Tolstoy then sought to propagate his beliefs on faith, morality, and nonviolence, writing mostly parables, tracts, and morality plays. He died of pneumonia in 1910 at the age of eighty-two.

What listeners say about The Cossacks

A visitor to another culture

This story is about an outsider joining a community and falling in love with a woman and the spirit of the place. A short book it's an intense listen and one to persevere with.
The reader voices one important character - a sort of village elder - and the reading is well paced and enjoyable. This is a book I'll revisit. Don't be put off by the book 'jacket'!

Slightly interesting at times, but glad it's over

If it didn't come from the pen of an author who would later write very well and have a big impact on European ideas, I think I would have given up early on. It's a youthful romantic jaunt, with flashes of perception on love, but mainly it's about men who are men and proud strong women. Clichés about Cossack life.
The reader uses a narrow range of voices for some characters presumably to add local colour but it's not helpful and it makes them sound the same.

This is one Tolstoy that is easily overlooked, but shouldn't be missed. It combines Tolstoy's philosophy with his religious moralizing with his love of the land and the simplicity of nature and those close to it. The novel explores the nature of happiness, the purpose of life, and Tolstoy's particular interest in rural life vs the more urbane Moscow/Saint Petersburg society.

This minor masterpiece is full of Tolstoy's fascination with the Cossacks (both men and women) and the Chechen braves (abreks), his love of the mountains, rivers, and flora and fauna of the Caucuses. There is part of it that reminded me a lot of an early Hemingway novel: a war, women, real men, horses and lots of food and drink. Again, if you've read 'War & Peace' and 'Anna Karenina' and are looking for another good Tolstoy, this is a solid piece (it happened to be Turgenev's favorite Tolstoy novel).

The major problem with this audiobook is the audio quality. The transitions (I think its a balalaika) is too loud and doesn't quite work. The narrator sounds distant and muffled like he read the entire novel with a 20 gallon paint gallon on his head. I got through it, but didn't really enjoy the novel like I hoped to because of the quality of the audio.

A Fool’s Guide to Happiness

The Cossacks: a Tale of 1852 (1863), Tolstoy’s first novel, conveys a vivid sense of a particular time, place, and culture and also explores universal themes about youth, love, nature, and civilization. The story begins with 24-year-old rich boy Dmitri Andreich Olenin leaving Moscow because he’s in debt and has just realized that he doesn’t love this rich woman he was supposed to marry, and he has nothing better to do, having aborted other half-hearted pursuits like attending university and farming, so he expects to get a fresh experience in the Caucasus Mountains as a cadet in the Russian army. As he journeys from Moscow to the mountains with his trusty serf-servant Vanyusha, he passes time complimenting himself for being a fine fellow, wondering what his friends will think about his move, calculating how many months he’ll have to live frugally to pay off his gambling and other debts, and fantasizing about becoming a heroic soldier and possessing a Cossack woman who will be beautiful, wild, clever, enchanting, and submissive. When he sees the mountains clearly for the first time on his first morning there, they penetrate his being, purging him of his trivial dreams, cleansing him of his Moscow shames:

“Suddenly he saw, about twenty paces away as it seemed to him at first glance, pure white gigantic masses with delicate contours, the distinct fantastic outlines of their summits showing sharply against the far-off sky. When he had realized the distance between himself and them and the sky and the whole immensity of the mountains, and felt the infinitude of all that beauty, he became afraid that it was but a phantasm or a dream. He gave himself a shake to rouse himself, but the mountains were still the same.”

Tolstoy then introduces the local inhabitants, the Grebensk Cossacks, who live in a village near the Terek River, across which live their rivals, the Muslim Tartars (Chechens), with whom they are continuously engaged in small scale horse-trading, raiding, and ambushing. The Cossacks are Old Believer Christians, free-spirited, down-to-earth, and feisty, close to nature, poor in material things but rich in passion and pride. They feel more akin to and respectful of their Islamic enemies across the river (and speak a lot of their Tartar language) than of their Russian allies whom they must billet in their villages.

Tolstoy develops his story by depicting the developing relationships between three Cossacks and Olenin. Taking the Russian under his muscular wing is Daddy Eroshka, a “solitary and superannuated,” powerfully-built, seventy-something guy who loves nothing better than hunting, drinking, gossiping, mooching, and boasting about his youthful exploits. Marianka, the young daughter of the village cornet in whose house Olenin is lodging, is a masculine girl who strikes Olenin as being as beautiful and inaccessible as the mountains and becomes his Cossack muse. And Rukashaka, the most dashing, plucky, and handsome of the young Cossacks, becomes Olenin’s unacknowledged rival. There are many neat moments: Olenin going hunting, being swarmed by mosquitoes, and having an epiphany about the best way to live; Daddy Eroshka wondering why Russians are so well educated but never know anything or explaining to Olenin why animals are at least as wise as people; Marianka cracking seeds, harvesting grapes or perching atop the stove; Rukashaka waiting in ambush or communicating with his deaf and dumb sister.

Tolstoy is not telling a page-turning, action-packed adventure story! With two notable exceptions, every scene of violent action happens off-stage, and most of the “action” consists of people drinking and talking as Tolstoy evokes Cossack culture (poised as it was between the Tartars and Russians in the fertile and sublime mountains), and to examine Olenin’s heart in that context. Will he forever remain an outsider? Will he learn what love is, or how to be happy in life?

David Thorn reads the novel with enthusiasm, irony, and clarity, and, fortunately, doesn’t try to make female voices sound female. Unfortunately, this audiobook production is damaged by two flaws: the end of each chapter is signaled by some pseudo “Russian” music that sounds like a digital guitar or harpsichord from a low-budget fantasy computer game, and the number of each new chapter is announced by a horribly syrupy, buttery, and American-sounding woman’s voice, and there are 42 of the durn things in this short novel. An awful mood-breaker. Oh, and the cover picture has egregiously little to do with the content of the novel.

The Cossacks is a perfect book to begin an acquaintance with Tolstoy, because it’s short and is accessible, filled with the psychological and philosophical insights of his longer tomes, but set in an exotic place and told with a more humorous tone.

Story and performance are fine (just not my favorite.). Audio “Skipped” in several places throughout the performance. This kept me from becoming truly immersed in the reading.

I'm not familiar with Tolstoy's works, and I was happy to find this relatively short work as an introduction. Tolstoy has a depth that could be hard to pick-up in an audiobook, but overall this was an enjoyable story that feels modern and relevant even if it is set in a world that is becoming increasingly unfamiliar today. The ending is sudden and open for interpretation, so this work might not be for every listener.

.... not at all Russian, Cossack, or whatever. Ending was in consequential, left me hanging.

Not on the same level as some of his more famous works, but still Tolstoy!

As other reviewers have said, the cheesy MIDI music at the end of the chapter is irritating, but it’s bearable.