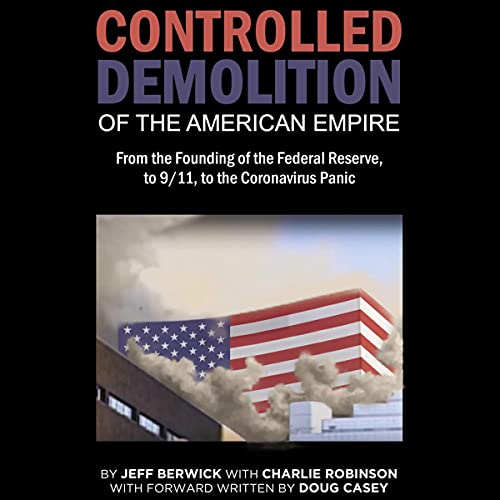 The Controlled Demolition of the American Empire

The American Empire is finished and will soon become another cautionary tale, tossed upon the trash heap of history, and destroyed by the very same societal issues that plagued the many former empires that share similar fates. It did not have to end this way, but when the most devious and ruthless members of a society are tasked with running the system, the outcome can hardly be in dispute.

All empires fall, but it is the reason they eventually come apart that is surprisingly similar. The fate of America will not be any different. Like a 47-story steel and concrete building that is covertly slated for demolition, the American Empire was built on a rotten foundation and has been targeted for destruction. The core of the building has been pre-weakened over the decades through government policies, had its support columns identified and rigged with financial detonators, watched society be transformed into a culture incapable of recognizing their impending doom to sound the alarm, and as the plunger is pushed down and the destruction begins, many people will have no idea of what is coming their way until it is too late. Once the debris is cleared away there is hope that a new civilization can be built, but will they make the same mistakes, or can they learn from the past and chart a different course

What listeners say about The Controlled Demolition of the American Empire

If you want to understand everything that’s happening, and has happened in the world - not just America - then you need to hear this in depth perspective Jeff and Charlie share. Frankly I’m surprised how informed they are and the quality or their descriptive prose. Just listen to it and you’ll agree!

If this doesn't wake you up nothing will!
No words of wisdom from Lucy though😂


Started following Jeff Berwick while researching trends and the actual plan unfolding behind the scenes.

Jeff is by far the closest I have seen to understanding, not only what is happening now AND what’s happening in the near and mid term.

Is Jeff always right? No

Did I follow a financial recommendation that he recommended at .30 cents that went to $16+ in under $30 YES

Is a subscription to TDV worth it ?

Best ROI available on current Financial Education if you actually want to survive, thrive and keep mentally, financially, physically and spiritually healthy in this New Normal.

Jeff:
Was one of Tony Robbins top
Sales & marketing guys of all time:
Hit me up.

Would love to help with what you’re working on.

All The Best,
Daniel Fleischman

Jeff Berwick and this book really opened my eyes to the BS happening all around me. I've already read the book 10 times and just wanted the audio version to support Jeff. Just met him down at Anarchapulco and he's the real deal. I highly recommend following Jeff and all his work. And who knows it just might make you rich as it is a lot of us! Thank you Jeff, I look forward to the future now that I'm prepared!

Read it and bought it on audible also

I read this right when it came out and it's epic so I want to support him and I have now bought he audible version also! If you want to refute cognitive dissonance and inject your self with a little red pill fluid from a seasoned open eyed tax refuting genius, this is you read!

Connecting the Dots for the Newly Red-pilled

I would imagine I'm not alone in turning more towards alternative media sources in the wake of the COVID-19 plandemic. I actually stumbled across the book by becoming a fan of the Macroagressions podcast with Charlie Robinson along with several others (I look forward to listening to the co-wrtiers show going forward.)

Jumping into this world can be daunting, there are shorthands that people in the know use like the Rockefellers, tower 7, the masons, and false flags, that at first leave the listener confused. Another gateway is that the world is filled with people who take things quite a bit too far, which throws shade on the people who are doing legitimately good research. But the biggest barrier by far is that most people in the conspiracy theory realm have is that the worldview they are trying to trying to project is incohesive because they are trying to connect too many dots that are not necessarily connected, this is where Berwick and Robinson excel.

This book does clearly and cohesively lays out a very different version of the world around us and connected quite a few dots that I had yet to connect for myself. I wish that I had used this as a jumping off point into the realm of conspiracy instead of as a journeyman because it would have saved me a lot of confusion when I was first diving in. I hope if you are reading this review before purchasing this book and you are in this position that you pull the trigger.

Well done, lots of citations. I will keep giving them away to friends and family.

I've listened to the 'dollar vigilante' (the author) on bitchute for probably a year now and hes one of my favorite online personalities- Hes also genuine and highly knowledgeable... When I heard he wrote a bookand it was going to be on audible I knew immediately what I was spending this months credit on.

I dont have time to write the review this book deserves- I'll revisit this down the road when I have more time- However, I felt it necessary to give it a 5 star rating in order to (hopefully) help give it more exposure.