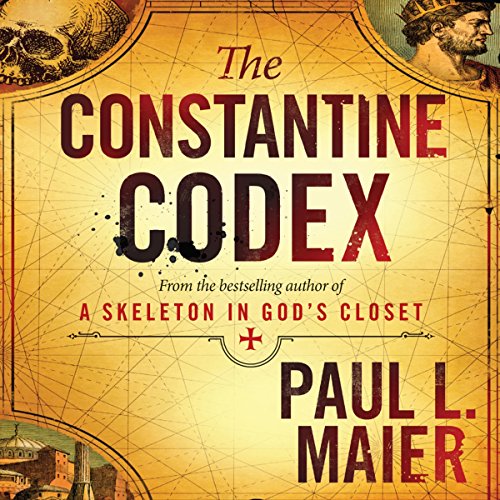 By: Paul L. Maier
Narrated by: Christopher Prince
Try for £0.00

For centuries, scholars have speculated about a lost book of the Bible. No one has ever found it...until now. A few pieces of centuries-old parchment tucked inside a tattered book lead famed archaeologist Jonathan Weber and his wife Shannon to what could possibly be the greatest find in church history—a discarded biblical manuscript whose ancient pages reveal a secret that will change the way the world views Scripture. Is it one of fifty copies commissioned by Constantine the Great and lost for centuries? Or the most sophisticated forgery of all time? When the manuscript is stolen, Jon is swept into a deadly race to find it and prove its authenticity before it’s lost forever. Everything hangs in the balance—his career, his reputation, even his life—but he’s willing to risk it all in one final daring attempt to determine the truth.

“Just a few pages into it I was hooked. Maier is that rare combination of masterful storyteller and historian. A brilliant use of the power of story to excite and educate. Bravo!” (Hank Hanegraaff, president of the Christian Research Institute and host of the Bible Answer Man broadcast)

What listeners say about The Constantine Codex

No discernable plot. Highly descriptive of inconsequential details. A highlight was the looking for an electric socket in the partriarchs library.

somewhere in the middle

it is the first time I hear someone explain in such fine storytelling, the differences between Christianism and Islam. Never does the text attack or minimalise either beliefs, but throughout the story, the points of view are clear and understandably presented.

The story is captivating, from the beginning you are drawn into the storyline and you experience the different scenes as if you are really there.

What other book might you compare The Constantine Codex to and why?

The Da Vinci Code was a tasty read, but Dan Brown played too fast and loose with history making it nothing more than mind candy. The Constantine Codex, on the other hand, is a full course meal that includes a heaping helping of history written by one of the foremost experts on early Christianity. Paul Maier’s sense of history is impeccable and he doesn’t hide his stripes when it comes to his faith.

The Constantine Codex is a work of fiction about the discovery of lost books of the Bible and the effect it would have on the Christian faith. It is part thriller, travelogue, Christian apologia, theological discourse, and history lesson. The writing style is dry, complex and vintage, which pairs well with a book about Biblical archaeology. Nevertheless, Paul Maier presents cutting edge concepts and realistically predicts the future of Christianity. If you’re interested in early Christian history, Biblical archaeology or the New Testament canon, I recommend spending a long evening sampling the courses of the Constantine Codex.

I am only three hours into this and I cannot imagine finishing it. No Mystery. No Thrill. This book should be listed under religious propaganda. This is more boring than a textbook on the topic.

CNN and Katie Couric assure it's a fiction novel

when the writer brought the Christian bashing CNN, Anderson Cooper and Katie Couric into the story, you know its fiction.

This book has too many words and few connected with interesting ideas. I don't want my money back.. after all, it's caveat emptor here in the free market. What I'd like is my time back. It's not so much money that Maier steals as it is a chunk of your life.

I think this is the only book I have ever had in which nothing happens... Waste one credit and my time.

This book was just too preachy for my liking, pretty much one sided. I found it somewhat boring.