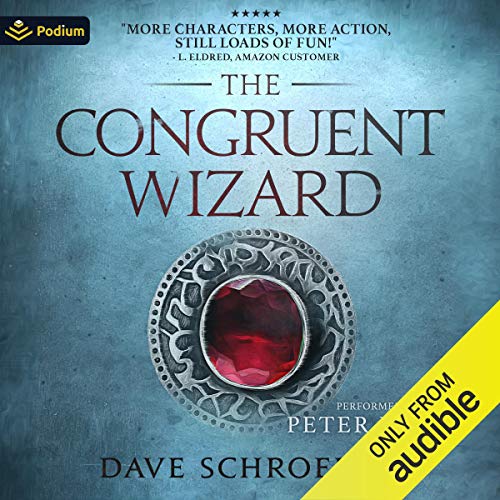 By: Dave Schroeder
Narrated by: Peter Kenny
Try for £0.00

Kingdoms are at war and young wizards Eynon and Merry are thrust into a complex web of conflicts, conspiracies, and long-hidden secrets as they learn more about the true threats facing Dâron, including an invasion by 500 dragonships from the northern kingdom of Bifurland.

On the Bifurlanders’ flagship, Eynon demonstrates his magic for their king.

It will have to be a fireball, thought Eynon.

He twirled his staff a few times, trying to look impressive, then realized he’d need a lot more practice before he could. Eynon held up his staff and concentrated, calling on his red magestone for power and his blue magestone for control before releasing a concentrated blast of energy skyward.

Seconds later, everyone was tossed to the deck by a tremendous explosion overhead. Concentric rings of blue fire surrounded a glowing red ball. A massive boom like the loudest peal of thunder ever heard assaulted their ears. Waves of heat beat down, almost setting the ship‘s sails alight.

What listeners say about The Congruent Wizard

A sixteen year old boy comes up with more tricks than people 3-4 times his age and experience? At first the story was tolerable with signs of the young teen being a protégée but then it begins to get silly. Great narration, bad story. It’s rare I won’t finish a series.

Looking forward to next book to read and learn what is the green flying item...wizard or dragon

I know this is a young adult book but if the narrator had not read it in a simplistic storytellers voice, (the way you would read it to a small child) can I think it would have been much more engaging and fun.
I think that writing on this was fairly well done, except for one major thing, the publisher or the writer decided to take one book and split it into two.... the first books cliffhanger was in not only an inappropriate but also jarring place.
the Cliffhanger on the second book is at least leading you into a new book and not feeling that you are cheated.

Schroeder has done it again! Wow!

Strap in and get ready for an awesome second book in the series. From the very first chapter I could not put this one down, and just like the first we join Eynan on his journey. The performance by Peter Kenny is absolutely astounding and really brings the world to life with different accents and a wonderful pace. I can't wait to see what is in store for Eynan and the gang in the upcoming book(s). Keep them coming!!!!!

A mesmerizing tale of grand proportions

I loved Book One and to follow Book Two was outstanding. The author has talent beyond reproach. He instinctively grows the story and characters to grand climax, yet still there is a beyond. The interwinding storytelling is masterful and though the story complicated, his skill to unfold the plot and sub plots are easily to grasp. A page turner extraordinaire... you don't want to put the book down wondering what comes next!

Normally sequels aren’t as good as the first books, but I think this book was even better than the first! Even though it was pain to see who the characters would become, the battles were as strategic as a good chess match! I have downloaded all the books, the first one took me two day as did this one, I have a feeling I will complete all of them before the end of the week. I can’t seem to “put them down”.

After a brief recap of book 1 (which you can easily skip if you're reading them at the same time) the action resumes at the precise moment that book one ended. The good guys and bad guys have an inconclusive fight (it's chapter one, of course they don't finish each other off), then scatter to plot and plan again. This time we follow several teams of good and bad guys as they assemble their plans, spy on each other, figure out exactly who all the players really are, and finally come together for a well plotted, fun, and epic final battle. Book one did the heavy lifting of character introduction and world building; here we leap from character to character and place to place to build a much more involved and interesting story.

I like how the story flows, the way the characters are made and how they interact.
This is a refreshing way to describe a world of magic. :D

And Peter Kenny is outstanding as narrator. The best.

Why I like this I don't know. Pretty simple but good natured and positive. try it out. if not what you like return it.

Innocence in character whilst full of angst. I really loved, in the midst of these times, escaping to another world that communicates hope.