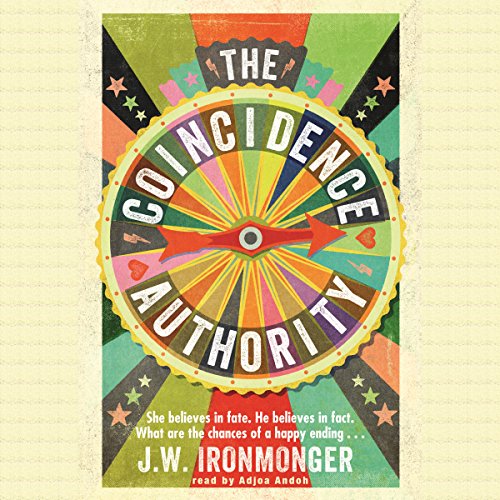 One seagull and four pieces of bread decide the course of one person's life. But is the rest just coincidence? A new novel from Costa Award shortlisted author J. W. Ironmonger.

Have you ever experienced a coincidence that seems too strange to be true? And is there such a thing as fate? The Coincidence Authority is a novel about love in a random universe, about two lost souls each with a quest to understand the secret patterns of their lives.

From the windswept tranquillity of a Manx village to the brutal abduction of child soldiers in Africa, the lives of Thomas Post and Azalea Lewis intertwine as they try to untangle the mystery of Azalea's past. A mystery that began with a seagull and four pieces of bread....

What listeners say about The Coincidence Authority

I was hooked from the beginning but the story steadily declines to a lousy ending. It's rare I stick with a book I'm not enjoying, but I hoped it was just the godawful narration that was putting me off.

Boy, she really can't do accents. This book is littered with them, and every time (even when the text didn't call for it), she put on the most atrocious caricatured accent that was so off-putting (why does the priest sound like he's having his privates electrocuted?). And as someone who's spent some time living in Uganda, her impression of an African accent is borderline offensive.

And so to Uganda, which it becomes clear is what the author is really interested in. It's fascinating, but it doesn't go anywhere, and there are much better books and stories on the child soldiers of Africa. And it just doesn't fit with the rest of the story. The unbelievable and passionless romance between Thomas and Azalea dwindles away and they become almost superfluous characters. And there the book leaves you.

I found the epilogue frankly patronising and it just compounds the book's fate as having not really been about Azalea or coincidences at all.

A promising set up of spooky coincidences...what does it all mean? Nothing. Nothing at all.

its a bit of a slog in bits but stick with it. it turns into a really tbought provoking listen.

thoughtfull, with great descriptions of Africa...


I found the characters well thought out ane the story original... looking forward to the next one

I got this in the sale, and it was going to be left on the computer for ages, as it didn't look that interesting - how wrong I was!

A three year old girl is found abandoned at a fun-fair, after being adopted by some missionaries she moves to Uganda. From here on, the coincidences in her life are astounding, but could they be enough to foretell her future?

If you liked 'Lost' you will love this.

Would you consider the audio edition of The Coincidence Authority to be better than the print version?

I've only read the print version of Ironmonger's previous book, 'The Amazing Brain of Maximilian Ponder', and not this one, but I have to say the narration was superb and really added to the story.

Having enjoyed a large number of audiobooks it is often the case that the narrator can 'make or break' your enjoyment of the story. In this case not only is it easy to listen to, the coherent and very accurate accents of the Isle of Mann, Devon and Uganda to name a few really help to attach the characters in your mind and aids for relaxing enjoyment of the story.

I would certainly listen to another story by this author and narrator again.

What other book might you compare The Coincidence Authority to, and why?

As in the title, a few chapters in, it reminded me very much of the TV series 'Lost'. Mystery and co-incidence is wafted in front of you, making you want to find out, before a bit more story is revealed to quench you a little before opening a new set of mystery.

Of course this novel length story involves fewer characters, but it does mean that each story thread can actually be fulfilled. In this case the characters are thrust into a situation with only the hints of their backstory, like 'Lost'. The real enjoyment of both stories is the backstory which is tantalisingly revealed to add meaning to the co-incidences as they are explained.

Without spoiling the story for others, there are a few scenes which have the pace and tension of an action film, which were stunningly realistic and made me not want to stop listening. Those were the best out of all the audiobooks I have had the pleasure of listening to.

Those looking for an 'out and out' love story as the main focus may not be as impressed, as this is not it. While there are two protagonists who do fall in love, this story is very much simply something that happens whilst the mysterious life of Azalea and quite literally how she came to be is revealed. Not being a fan of 'schmaltz' that was perfect for me, and this was the first story since 'Lost' which made me really want to find out the story of the characters whose lives have led them to the present day.

As mentioned before, a couple of longer scenes are full of tension. What I was also impressed with was the accuracy with reality and the realisation that although this was a work of fiction, some of the very shocking events are based on documented facts, and to give credit to the author he gives references for these so that if you are interested you can discover more.