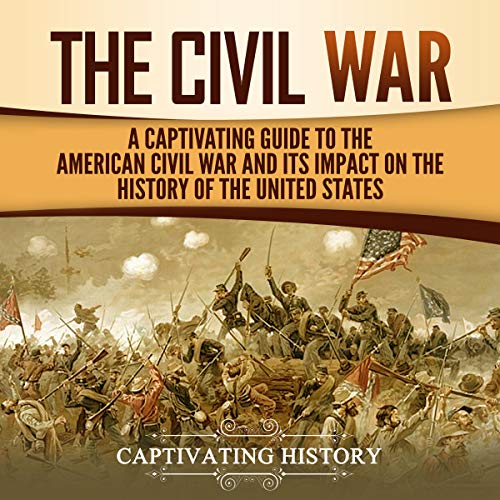 The Civil War: A Captivating Guide to the American Civil War and Its Impact on the History of the United States

More Americans died in the Civil War than in WWI, WWII, and Vietnam combined. The war not only put Americans against Americans, but family against family, neighbor against neighbor, friend against friend. The conflict between the Union and the Confederacy still runs deep in some parts of the US. Indeed, the fundamental questions of the Civil War - questions about racial (in)equality, the rights of citizenship, and the role of government - remain hot debates today. In many ways, the war that claimed more than 600,000 American lives a century and a half ago is still the biggest battle being waged on American soil.

In The Civil War: A Captivating Guide to the American Civil War and Its Impact on the History of the United States, you will discover topics such as:

So listen to this audiobook now if you want to learn about the Civil War!

What listeners say about The Civil War: A Captivating Guide to the American Civil War and Its Impact on the History of the United States

Four Stars From Me!!!

The book gives a good overview of the war and its causes. It gives the reader a good taster and ideas for further reading.

At the end as racist is just ludicrous.

Its too boring for a British. Trying to tie Obamas question of birth certificate origin at the end as racist is just ludicrous. I still posted three stars, because the author did some work and narrator did his job as well.

This topic was broken down and easy to understand which was commendable. I always get confused between the generals, major battles, and politics, this audio version on the other hand...helped me understand the details surrounding the war.

I also enjoyed the events leading prior to the war and the aftermath.

Thank you for adding a selection from another book in Chapter 14...The roaring 1920s.

A very interesting read with some unknown facts. This is brief but expresses how the civil war still impacts our culture till this day.

Interesting, the Writing style keeps you interested and you definitely learn alot from reading this book. 1861 -1865 are the years of the Civil War, with Reconstruction until 1877

Without a doubt the best explanation of the reasoning for the Civil War and the impact that is still felt today.

I enjoyed this book and the way the author presented facts in straight forward manner.

There is much to learn, this book is packed.

A Must Five Star, our history.

Great read. Would recommend it to anyone who has time and wants to know a bit about our country's history.

Great intro to the Civil War

I will admit I was never much of a history buff, but I do feel its important to have a base understanding of events in history. I really enjoyed reading this book, it touched on some key points of the Civil War, just enough information to make it interesting and valuable. I read the Kindle version, formatting was great along with the content.

Some challenges to older views.

I liked the book, with an updated view of the influencing elements of history, but would probably go with caution about some facts. Did most devastation of plantations happen at the hands of Southerners, as opposed to Sherman on the march to the sea? Maybe to crops, but not homes and belongings. Some faked a quarantine on the property to get troupes to pass by( ie., Charleston, SC).