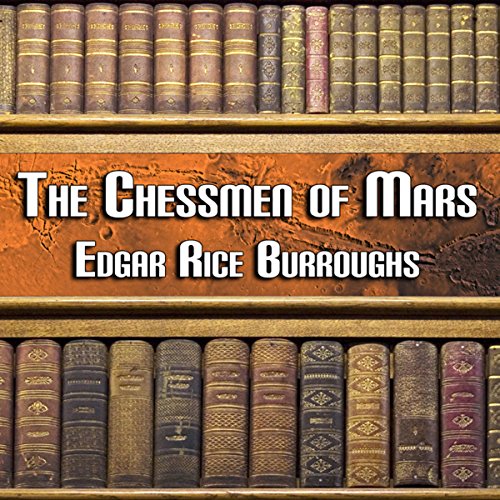 The Chessmen of Mars

The Chessmen of Mars is the fifth novel in the Barsoom Series by Edgar Rice Burroughs.

Princess Tara, the daughter of John Carter and Dejah Thoris, receives prospective suitors at her father’s court. When Princess Tara meets Prince Jed Gahan from Gathol, she thinks he is a popinjay, but she eventually learns to respect and even love him while fighting the terrible Kaldanes from Banths. Princess Tara and Prince Gahan are captured in the city of Manator, where a live version of the game of Jetan (Martian Chess) is played to the death.

What listeners say about The Chessmen of Mars

Don't be fooled by the rating. It's terrible.

Love you Audible but why was this book given a good rating?? Terrible narration. Every sentence is read the same and at an irritating near-shout. No acting, no nuance, nothing. In fairness, I can't really rate the story itself because I haven't been able to get through more than 15 minutes at a time without taking a long break. Even trapped in my car during a 2 hour commute. Really really disappointing. Side note - I gave 'Performance' 1-star only because the system wouldn't allow me to leave a rating category with 0 stars and still write a review (glitch or what?). I take it back.

great reading of the story

the narrator was wonderful. he voiced between characters so well he hardly needed to say who was speaking. he pronounced some of the more intricate words clearly and fluently.
great story in the series

Great for Going to Sleep

Where does The Chessmen of Mars rank among all the audiobooks you’ve listened to so far?

The story is slow to me. The first three book by Burroughs were faster I think

Not very much maybe it's the reader?

Would you be willing to try another one of Peter Delloro’s performances?

NO, He is no reader that you can listen to over a long story

No not with this reader.

What made the experience of listening to The Chessmen of Mars the most enjoyable?

remembering the book i read when i was young

What other book might you compare The Chessmen of Mars to and why?

none, it was unique, due to the last part of the book held very memerable caritors.

Have you listened to any of Peter Delloro’s other performances before? How does this one compare?

he did not put me to sleep at all

Wish I could have MORE.

I have listened to this story twice. Edgar really did an awesome job, and Peter totally captures the personality of the Virginan Man, John Carter. Totally worth the value, just make sure you read them in Order, in my opinion.