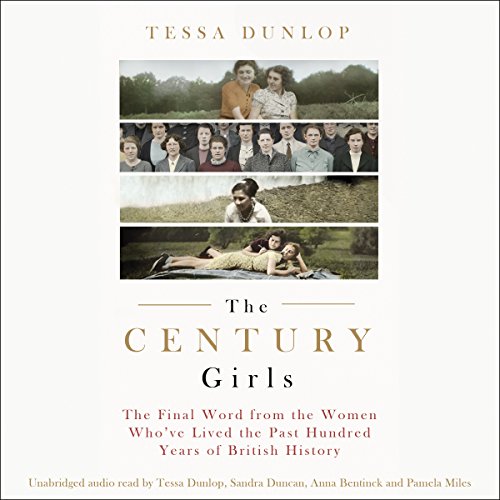 In 2018 Britain will celebrate the centenary of women getting the vote; during the intervening 10 decades the lives of women in this country have been transformed. Told in their own voices, The Century Girls celebrates seven centenarians who lived that change: what they saw, how they were treated, who they loved, what they did and where they are now. With stories that are intimately knitted into the history of these islands, The Century Girls is a time-travel adventure featuring society’s oldest, most precious national treasures.

In 1918 the Suffragettes famously blazed the trail for women. This book reveals what came next for girls growing up in 20th century Great Britain, whether they resided in Scotland, England, Wales or Northern Ireland; whether they were housewives or in the workplace; and describing their surroundings of the city, the countryside, or coming to the British Isles from the one of the Commonwealth countries. The narrative will travel through the experiences of some key figures who are now themselves well over a hundred years old. It will tell the human story of how women gradually began to build independent lives for themselves in the modern world of post-Great War Britain, by retelling what their actual day-to-day reality was like through the decades.

What listeners say about The Century Girls

An interesting read following the lives of seven centurion women, who have all led different and interesting lives. A great read to enhance your history knowledge and your understanding of life back in the day. My only criticism is that it was hard to follow as it kept changing from one women to the next to follow a chronological order or their lives.

Century Girls for the Girls of 2020

Really interesting book about the lived experiences of ladies born 100 years ago. I’m old enough to have known women from that era, now passed away- so interesting to know what women actually did in their younger days. Understanding their lives, relationships, opportunities and adventures has been inspiring and fun. Well written and well read.

A great insight into the different class distinctions and great personalities of 100 years ago.

Essential listening that is a privilege!

Tessa Dunlop has made an incredible foray into the private lives and opinions of a varied quintet of very old ladies. We are given perspectives on 5 very different walks of life across ten decades. The book flows and weaves beautifully with a directness That refuses to sentimentalise or heaven forbid patronise. Instead it is respectful and candid, the back drop of facts and history do much to set the context and are so vivid and interesting.
The narration flows beautifully and the actresses represent the women so well.