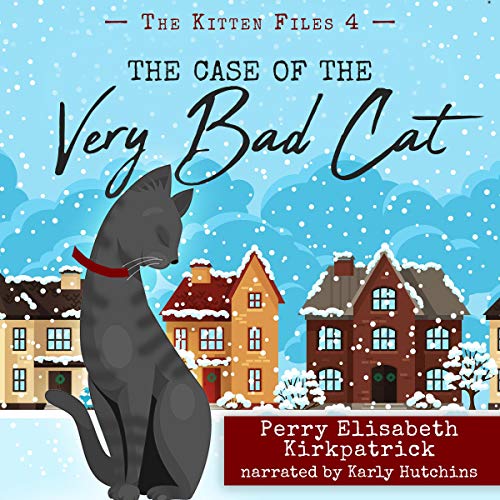 After nearly being discovered by the scientists from Caput Laboratories and having to fake her own death, Mia has been lying low. As Christmas approaches, she gets herself temporarily adopted by College-Guy, also known as Tommy.

Something is afoot in the neighborhood, though, and when Mia is accused of leaving dead mice and birds on the neighbors' doorstep, she's determined to get to the bottom of it. But even the mystery isn't what it seems.

Will Mia be able to solve the case of the Very Bad Cat? Will she be able to return home so Keith doesn't spend Christmas all alone?

What listeners say about The Case of the Very Bad Cat

OK, the title had me nailed from the get-go, and the concept of a cat who can read and write tickled my fancy. Cats as sleuths? Absolutely! This short story is the first of the series I've read (actually, listened to Karly Hutchins' well-modulated narration) but enough of the background is filled in to make it easy to follow. Now, of course, I want to go back and enjoy the earlier titles too.

I really enjoyed listening to this audiobook. The narrator does a wonderful job bringing each character to life. Mia is a cat that can write and carries a phone. In this book she is in hiding, hoping she can go home soon. This was my first book to listen to in this series and now I want the first three.

A cute cozy mystery where the main character is a cat with special abilities. I have not listened to the first three books in the series, so I don’t know what led us to this point, but this story certainly stood on its own. I enjoyed the storyline and the narration. I would not hesitate to check out the other books in this series. I was given this free review copy audiobook at my request and I have voluntarily left this review.

The Case of the Very Bad Cat by Perry Kirkpatrick is a short, delightful story. Mia aka Jo is a technology savvy cat that wants to make Keith happy, and also help another cat (Spitz) find a home. This listen is appropriate for all age levels, and has great imagery and fun cat antics. Karly Hutchins is the perfect narrator for this book. She adds the right expressions and enthusiasm for the story. I requested this review copy audiobook and have voluntarily written this review. I would definitely listen to more books by this author and narrator.

A quick adventure with Mia the cat detective......

The Case of the Very Bad Cat is the fourth book in this series featuring Mia, a cat with the ability to read and write. I hadn't read any of the previous books in the series, so I was missing much of the back story on Mia and her abilities, but this didn't detract from my enjoyment of the story. In this novella length story, Mia the cat is in hiding from her enemies (identity unknown to me at this point), so she takes temporary refuge with a kind college student and rapidly begins investigating the case of the very bad cat. Mia's handling of this case was precious, especially the part with the fish crackers of cheesy, salty orange goodness, a.k.a. Goldfish crackers. Not only can she read and write, but Mia carries a cellphone in a holster and uses a stylist to send texts and search the internet. The author truly has a great imagination, and this was a delightfully entertaining and relaxing listening experience. Karly Hutchins is the perfect voice for our cat detective Mia. She has a high, lilting voice, and her performance was flawless. She handled the varied personalities and characters with equal ease. I would absolutely listen to another audiobook she narrated, and I hope to go back and listen to the first three books in the series to hear more about Mia. I received a copy of this audiobook at my request in exchange for this honest review.

This is Book 4 of the Kitten files, but it stands alone. A nice cozy mystery! The short story is great for the entire family. Nicely read by the narrator. I was gifted a copy of the audiobook in exchange for an honest review,

Perry Kirkpatrick has written another adorable and very enjoyable story about little Mia's adventures. The narrator, Karly Hutchins, did an outstanding job with all the voices, and even sang part of a Christmas Carol. Wow, just wow, it was amazing! The singing actually gave me chill bumps, it was so beautiful, and what a nice touch!

This was a super cute and fun short mystery. It was from the perspective of the car who is medically enhanced to be more intelligent. This story is one for all ages and is clean and free of bad language and the like making it "G" rated in my book. I have encouraged my kids to listen to this one too. I was given this free review copy audiobook at my request and have voluntarily left this review.

Cute story but the narrator’s voice grated on my nerves. This is the first book I have read in the series and I was a bit lost. I think it works better if you have read the others. I can “believe “ a cat that can talk, read and write but I just can’t get behind a cat that has it’s own cell phone and texts. That’s just too far for me. If you like cutesy stories then you will love this book. I received this book for free at my request and my review is entirely my own.