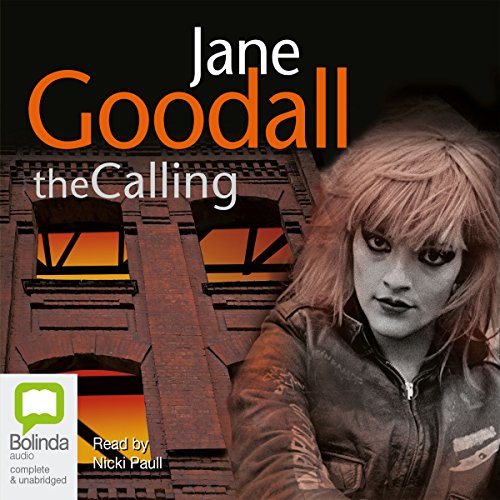 By: Jane Goodall
Narrated by: Nicki Paull
Try for £0.00

Jane Goodall’s third Briony Williams page-turner, The Calling, set during the height of London’s punk movement in 1976, finds Briony, newly promoted to detective with the Chelsea CID, and her colleagues pitted against sinister anarcho-rockers Sudden Deff, whose volatile and nihilistic antics seem to translate as well off stage as on.

Following the phenomenal success of The Walker and The Visitor (both available from Bolinda Audio) comes the third Briony Williams thriller, The Calling.

Goodall's popular leading lady, Briony Williams, is now a detective with the Chelsea CID. She has grown in confidence and rank from when she first appeared in The Walker as a rookie cop.

In the fierce English summer of 1976 the Punk movement is on the rise and chaos is the catchcry down in its heartland at the World's End of London. But things take a darker turn as a new group calling themselves Sudden Deff show signs of wanting to live up to their name. When Briony learns that she and two close colleagues have appeared on 'Deff Row' in the group's fanzine, she is drawn into a fatal game with a set of adversaries who always seem to be two moves ahead.

“A wonderful selection of mostly British characters awaits you in this story of London in the 1970s. A punk band that attracts large crowds with its fiery displays publishes a fanzine with pictures of police officers marked for death. When her beloved commander is attacked, Inspector Briony Williams (also targeted) investigates. Nicki Paull does all the voices--the Scottish commander, band members, two female hangers-on, an American journalist – with individuality and assuredness. As Briony herself – feisty in her job but vulnerable romantically – Paull is not afraid to emote. She keeps three intertwining plots going until they culminate in a tension-filled conclusion. A stand-out Australian production.” ( AudioFile magazine)

What listeners say about The Calling

This may be a good book

The story seemed interesting. The characters may or may not have been well defined. Both were obscured by very poor narration. Voice characterization was often inconsistent and contextually inappropriate. Listening to screeching is not pleasant. Here it might have been necessary to one or more characters/situations. However, it should be used sparingly whatever the purpose. There was far too much of it in this narration.