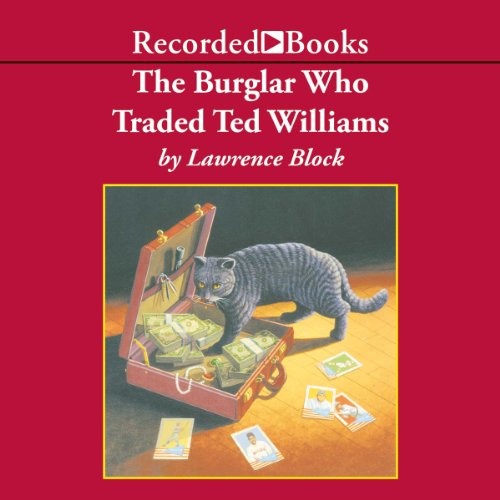 The Burglar Who Traded Ted Williams

The Burglar Who Traded Ted Williams

Fans will rejoice as New York's most charming burglar returns to action. Greenwich Village bookseller Bernie Rhodenbarr has perfected the art of breaking and entering, as well as that of clever repartee. Bernie gets plenty of opportunity to exercise both his wit and his lock-picking muscles, as he juggles old friends, new "employees," potential girlfriends, and various criminal charges.

Bernie is seriously considering retiring from his life of crime, now that his used bookstore is finally turning a small profit. Then his nasty new landlord raises the rent - by $10,000 a month - and Bernie is hard pressed to resist the temptation to supplement his income. But when a dead body turns up, and an invaluable baseball card collection is missing, who will believe that Bernie had nothing to do with it? Narrator Richard Ferrone's deadpan delivery offers the perfect contrast to Bernie's giddy misadventures. It would be a crime to miss this fabulous performance.

This is my favorite Bernie Rhodenbarr

This is my favorite of this series, not because the mystery is any better -- and let's face it, we really don't read Bernie for the mysteries. I love it because the introduction of Raffles the cat adds a whole new dimension to the characters of Bernie and Carolyn. As well as some really funny bits about cat owners in general and women cat owners in particular!

I read all of the Burglar books a number of years ago, and like many fans of this series, always hoped that Lawrence Block would write at least one more. Now a new one is coming out, so I thought I would listen to them all this time around. Block used to narrate these himself, but I definitely like the new narrator's voice. He does great character voices, which is so important for this series, which is all characters.

This is simply an awesome Series

Would you listen to The Burglar Who Traded Ted Williams again? Why?

Absolutely. It is a great performance

Bernie, he is funny

What does Richard Ferrone bring to the story that you wouldn’t experience if you just read the book?

Just a great performance hits all of the beats

It gave me that big a hah! moment

Great series read them all.

I laughed myself silly over the mangling of Sue Grafton titles! Bernie really tried not to go back to burglary, but it happened anyway. And I got to learn more about used book pricing and the insane prices of some vintage baseball cards. The publisher's blurb gives hints and there is no need for spoilers, just enjoy the unraveling of the mystery!
Richard Ferrone continues to be perfect as narrator for this series.

It's a short book with a somewhat dated (early 1990s) and average storyline. The dialogue is good, but there's a bit too much of it ... it distracts from the story. At the end, the lead character 'Bernie' has everyone in the room and explains/unravels the mystery. It reminded me of an old Agatha Christie book, that stuff just isn't done anymore, and for good reason.

yes, keeps you intrested all the way.

Have you listened to any of Richard Ferrone???s other performances before? How does this one compare?

I have always liked the authors books!

If you like Lawrence Block's Bernie, you will love this story. John in Tampa