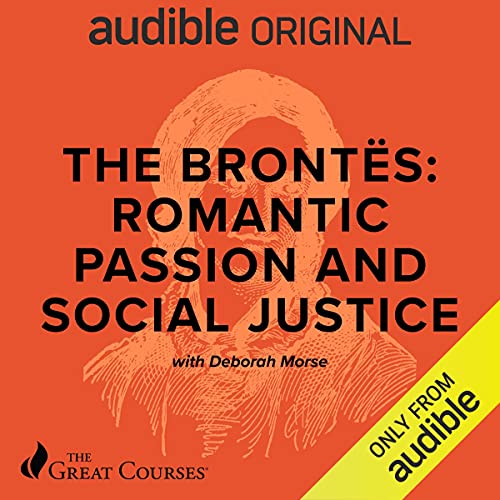 Charlotte, Emily, and Anne Brontë created some of the greatest works of 19th-century English literature. How did these three young women, born into a humble parsonage on the isolated moors of Northern England, write such striking work? What influenced them? How did they get their stories out into the world? Why do their novels continue to grip readers to this day?

These and other questions are what you will explore in The Brontës: Romantic Passion and Social Justice. With Brontë scholar Deborah Denenholz Morse, you will look at the lives of the three Brontë sisters, their family life, experiences, beliefs, motivations - and their many tragedies. As you look closely at the literary and real-world influences that shaped them, you will get a deeper understanding of the astonishing talent and deep drive that pushed these three sisters to write novels like Jane Eyre, Wuthering Heights, and The Tenant of Wildfell Hall. These stories - often full of wind-swept drama and tinged with both personal and Romantic darkness - have gone on to influence the Western literary tradition far beyond what the Brontës themselves could have ever predicted.

The Brontës were deeply influenced by the world around them. Looking into their lives and work, you will get insight into the causes and events that shaped these phenomenal writers - not only their religious and Romantic influences, but also the social justice movements of their age, from women’s rights and anti-poverty campaigns to slavery abolition and early efforts to curb animal cruelty. You will see how their work transcended mere social commentary or embellished autobiography and left their mark on the social and literary trends that would emerge after them.

What listeners say about The Brontës: Romantic Passion and Social Justice

Splendid talks for lovers of Brontës

If you turned the last pages of Jane Eyre, Wuthering Heights, or The Tenant of Wildfell Hall longing for more, this series of of talks is for you!
Professor Morse movingly describes the hard lives of these gifted sisters, but develops a portrait of thrillingly vital creative geniuses fully alive to the injustices and struggles of their time. Returning to the great novels in subsequent lectures, Morse shows you how no single reading does justice to the complexity of characters like Rochester and Rev. St. John Rivers. I won’t pick a favorite, but lecture three had me ready to march in the streets for women’s and animal rights! And after making me want to read all the novels again, the final lecture gave me new Brontë-inspired fiction to seek out. I especially appreciated Professor Morse’s warm voice and quietly passionate readings. I recommend this series most heartily.

I only wish I could have been in a classroom to engage in discussion with this professor. Any listener will be eager to go back and reread the great writings of the Bronte sisters as well as more modern writers who followed their lead.

I have studied the Brontes before, but so much of this was wonderful, new thinking!

So nice to hear these lectures again

I attended William and Mary and took several of Professor Morse's classes, one entirely on the Brontë sisters. It was so nice to listen to this and recognize some of the discussions we had in our classes, and to hear her recite passages from the Brontë novels like she did during our classes. Professor Morse is a brilliant teacher and I'm probably going to listen to this series again soon as I reread the novels.

I hope my nephew can take her class!

I would give anything to go back to college, choose William and Mary, ( if they would have me lol), and get in Professor Morse''s class!!

If you love the Brontes this is a must listen!

My nephew starts at W & M this fall and I told my brother about this. :)

Thank you, Audible, for offering this treat!

A clear and engaging introduction to all three Bronte sisters

Professor Morse speaks passionately about her loves for the novelists and their commitment to social justice and women’s independence in nIneteenth-century England. Very enjoyable and inspiring.

Professor Morse's lectures are informative, insightful, and beautifully delivered. She tells us of the Brönte sisters' upbringing and explains this and the many other influences on their writing. As Professor Morse inspires us to read (or re-read) the Brönte novels, we can only envy the education she gives her William and Mary students.

She’s the best. These essays are the best.

For a very lucky generation or so of students at William and Mary, Professor Deborah Morse has acted as a guide and mentor in decoding British Victorian Literature. You can only imagine the excitement of this middle aged English major to discover that I can listen to these incredible, timely, interesting lectures on my morning walks. They take me straight back to Tucker Hall, where I received the gift of being Professor Morse’s student.

These lecture are relevant, fascinating, and engaging. I only wish that my boys were old enough to have Professor Morse so we could discuss them together.

Wonderful and interesting insights into the Bronte sisters

This lecture is beautifully written and delivered by the author, Deborah Morse. The students at William and Mary must be delighted to have such a wonderful professor!

The perfect addition to your Audible library!

I adored this series of lectures on the Brontës, and though it's been many years since I've read WUTHERING HEIGHTS and JANE EYRE, Professor Morse reignited my interest in these two important works of English literature. I will definitely be returning to these novels with a new perspective and one imbued with Professor Morse's generous insights. I'm also grateful for the introduction to Anne Brontë's biography and her work, and I look forward to spending time with THE TENANT OF WILDFELL HALL. Thank you, Professor Morse, for sharing these marvelous lectures!