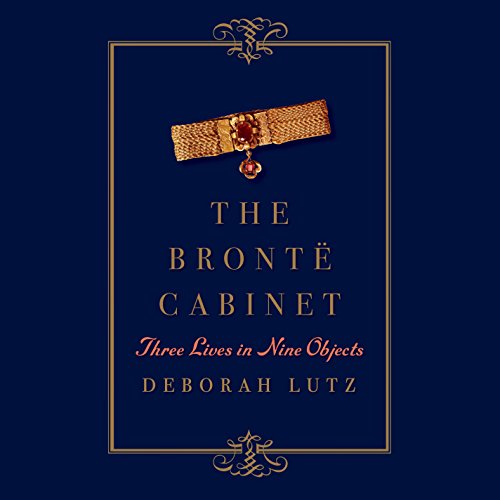 By: Deborah Lutz
Narrated by: Esther Wane
Try for £0.00

An intimate portrait of the lives and writings of the Brontë sisters, drawn from the objects they possessed. In this unique and lovingly detailed biography of a literary family that has enthralled readers for nearly two centuries, Victorian literature scholar Deborah Lutz illuminates the complex and fascinating lives of the Brontës through the things they wore, stitched, wrote on, and inscribed. By unfolding the histories of the meaningful objects in their family home in Haworth, Lutz immerses listeners in a nuanced re-creation of the sisters' daily lives while moving us chronologically forward through the major biographical events: the death of their mother and two sisters, the imaginary kingdoms of their childhood writing, their time as governesses, and their determined efforts to make a mark on the literary world.

From the miniature books they made as children to the blackthorn walking sticks they carried on solitary hikes on the moors, each personal possession opens a window onto the sisters' world, their beloved fiction, and the Victorian era. A description of the brass collar worn by Emily's bull mastiff, Keeper, leads to a series of entertaining anecdotes about the influence of the family's dogs on their writing and about the relationship of Victorians to their pets in general. The sisters' portable writing desks prove to have played a crucial role in their writing lives: it was Charlotte's snooping in Emily's desk that led to the sisters' first publication in print, followed later by the publication of Jane Eyre and Wuthering Heights.

Charlotte's letters provide insight into her relationships, both innocent and illicit, including her relationship with the older professor to whom she wrote passionately. And the bracelet Charlotte had made of Anne and Emily's intertwined hair bears witness to her profound grief after their deaths. Lutz captivatingly shows the Brontës anew by bringing us deep inside the physical world in which they lived and from which their writings took inspiration.

What listeners say about The Bronte Cabinet

This is examination of the lives of the Brontës through some of their personal possessions. It is a well-written and well researched book - with fascinating insights into the private lives of this amazing family in the context of their times. As a Brontë-phile for many years, I found many new and perceptive angles that I had not come across before. However, the narrator's lack of preparation really spoils the listening experience. Firstly, she pronounces the world-famous village of Haworth, as 'Hay-worth', then struggles with the pronunciation of laudanum.
The word 'Papa' makes Mr Brontë sound as though he comes from the Deep South - Ms Windsor puts the stress on the first syllable instead of the second.
She is unaware that the first name 'St John' is not pronounced as 'Saint John' and hasn't worked out that the 'm' in M. Paul Emmanuel, stands for 'Monsieur '. Appalling ! If I was Deborah Lutz I'd be very disappointed.
It's a real shame. I wish I had stuck with the print version !

What a strange experience listening to this audiobook is.

Fantastic book - material objects and the light they shed on culture. I have read so many books about the Brontes, over four decades maybe every major thing published. This book is right up my street - brilliantly researched, well written and actually full of material I haven't encountered elsewhere.

But where on earth did you find that narrator? I actually checked I hadn't accidentally got the 'robot' narration, she is so poor! How could anyone with such an 'educated' sounding voice, be so ignorant they can't pronounce simple names and placenames like &quot;Keighley&quot;, &quot;Haworth&quot;, and &quot;Nussey&quot;? (As well as some other spectacular malapropisms - I wish I'd taken notes!)

I was listening to this whilst my husband was still half asleep, this morning, and &quot;Noosey&quot; actually made him laugh so hard he nearly choked.

Unbelievable. I have checked again. Nope, not a robot.

Words like Haworth and Keighley are, you'd have thought, slightly central to the Brontes' story.

And what a shame such an appalling narration distracts from a fantastic book. Sadly it does as I made the unusual decision of buying the Audible book first when I normally buy on Kindle or a print version.

Please please publisher, re-record this with.. you know, someone who can actually... read.

I can't review what seems like a fabulous book, with such atrocious narration standing in the way. This is too embarrassing to listen to, in front of other people.

Not for Bronte experts

If one is already a true Brontë fan and avid reader, there's not much here they won't have already read. For everybody else, it's certainly helpful.

Highly recommend to those interested in the Brontes as well as all things Victorian. Loved the cultural background explanations, like postal reform which affected Charlotte's letter writing. I only wish it had a pdf file with with illustration of the objects discussed!

I wonder if the previous reviewers listened to a different version from mine, but Haworth is pronounced correctly as 'Ha- worth', and St John as 'Sinj'n', cant fault the narrator wonderful performance emotional where needed,kept me really engaged!

I love anything bronte but this has got to be the most ill-conceived book I've tried to read about them.
Tedious, nothing like the description, no atmosphere created by this narrator.
Sorry, going for refund.