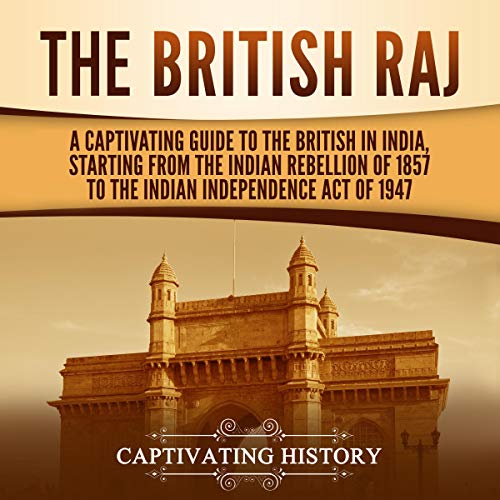 If you want to discover the captivating history of the British Raj, then pay attention...

The British presence in India lasted for nearly 350 years, but only the last 90 were under the direct rule of the British government. To some, 90 years might seem a short period to write a history book about. However, the time of the British Raj was very influential. It brought change to Indian politics, education, society, infrastructure, industry, and other aspects of Indian life. But while the British Empire brought modernization to its colonies, that modernization came with a price.

The British Raj did not cover just where India is today. In fact, it spanned across the territories of four separate states that exist today: Bangladesh, Pakistan, India, and Burma. It is estimated that around a quarter of a million British were buried in these territories since the East India Company set its first foothold. The oldest European graves can be found in port cities such as Madras or Bombay, where the first merchants settled trading offices.

In The British Raj: A Captivating Guide to the British in India, Starting from the Indian Rebellion of 1857 to the Indian Independence Act of 1947, you will discover topics such as:

So if you want to learn more about the British Raj, scroll up and click the "Buy Now" button!

What listeners say about The British Raj

A great start to understanding the army of Raj

An entertaining read from Richard Holmes. It was not a heavy history but anecdotes divided along with themes. The edition I have was a paperback and was 572 pages with the listening stopping on page 506. Richard Holmes has not attempted to provide a blow by blow history of the Raj but rather a read about what soldiering was like in British India for both the British East India Company soldiers as well as those from the British Army. He did, however, provide a quick history at the start to give the listen to the context of the anecdotes that come afterward. He has chosen his episodes well, although sometimes it seemed to be a case of cut and paste with minimum thread from him.

audible was full of and useful information, but unfortunately, the years in which I was particularly interested, namely 1800-1825, were almost completely neglected. Also little information about 17th Foot army, and in fact, some discrepancies in the work compared to other published information (Historical record of the 17th or Leicestershire Regiment of Foot; Richard Cannon, Esq.; London, 1848). However, still a jolly good read.

My grandfather served in the British Army in ...

Excellent! My grandfather served in the British Army in India from 1870 to 1881. This audible gives an insight into the conditions they suffered. You will hear endless tails of the ruthlessness visited in the Indian society by the Raj.

Another Gem from the British Soldier's Biographer

It's relatively easy to listen to an account of the life of a prominent general or another wartime leader, especially if one comes late to the composition party after sufficient time has passed to allow the accumulation of encomiums, accounts of battles, maybe even the subject has listening an autobiography or other reminiscence. Not so with the common soldier, you know, the poor devil who served as the collateral to the hero's chess master. But Richard Holmes has found the design, to our delight and education.

surprised to listen that India paid for England

This volume explains the overall picture of the association that the British had with the Indians. I was surprised to listen that India paid for England's Industrial Revolution. Both countries benefited from their community financially but I doubt Indians were expressly thankful for the British rule. The British were fairly dismissive of Indian culture and religions.

An unbiased view of British India.

Just finished listening to this insightful and well-documented work. This is the second audible I have to listen to on the subject time period in India's history and was impressed with the objective view the author took in presenting several sides to some of the major questions that archivists have debated in the years following the end of British India rule. Would definitely recommend this to anyone engaged in this time frame of India's history.

Not recommended. Too dry & academic

The story of the Raj is a good one, but this book treated it in a shallow, dry and academic manner -- like a college course taught by an uninspiring professor. It covers the facts of the British occupation and eventual independence movement, but without human backstories. The number of deaths suffered by the Indian population, both through famine and colonial repression, was astounding -- though no human stories were included behind the statistics. I do not recommend this book. Am sure there are better ones to cover such a large and interesting topic.

A very comprehensive study of the force of Great Britain's authoritative power in India and how it made India the country it is today. What really stands out is the strengths of the Indians to retain control of their control through the 200 hundred years. Many enterprises failed as the British struggled to keep the brightest of the Indians out of the higher positions however they were able to result driven by their service to their country and people.

vaunted British Raj in India gets a good audible

It is revisionist in its approach. The view of the Raj (meaning the British imperial rule in India, which included what is now Pakistan and Bangladesh) is that the British were and thoroughly in control. Wilson's view is that the British continually worried about their defense and that much of the history was a consequence of insecurity and policies cobbled together in answer to events.

History of Colonial India with a focus on india

The Chaos of Empire is an account of the British rule of India and how it evolved over the centuries until independence. It discusses the colonial period with a revisionist angle on the lack of immersion by the rulers, the lack of strategic vision, and the constant frictions due to culture clashes. It is informative at times the writing is without it can be a bit tough to get through at times.

How the British Adjusted to Living in India

David Gilmour's audible is addition to the literature on the social life of the British in India. His audible provides a rich tapestry of their everyday experiences during their stay in India for over two centuries.

I have been very interested in the impact on Indian History and Culture due to the Colonial incursion. This audible is brilliant, funny, and insightful. I now must listen to everything he’s listening! It’s not the audible fault, but I had been promised a signed copy and my copy was not signed.

Very good listening. I like the fact that it interested in soloing the good the British did and knot just the bad

A balanced view about the history of British rule

The British Raj: The History and Legacy of Great Britain’s Hegemony in India and the Indian Subcontinent gave a reasonably fair/ balance discussion of British rule in India. The British Raj lasted approximately 90 years, between 1857 ( after the mutiny) and 1947. The British East India Company was created in 1600, it was essentially a house enterprise and that acted as its own country. the audible describes in a compact use British beliefs and behavior in India.

the British Empire and the stereotypes

I remember listening to visual depictions of India existed under the rule of the British Empire and the conventions within India from coarse Hollywood movies that persist today. There is also the knowledge that India as the world has made great moves to develop itself and to become a significant commercial and administrative player in the Far East.

For those who have no good idea of what was meant by the British Raj in India, this is a great place to begin. As an audible go, it's not that well organized, though thorough. It feels as if it were written by a committee, and it flows like a rocky stream, but it is listen.