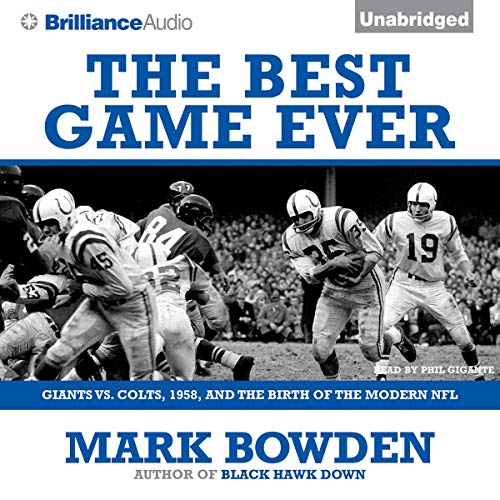 On December 28, 1958, the New York Giants and Baltimore Colts met under the lights of Yankee Stadium for that season's NFL Championship game. Football, growing in popularity amid America's post-war economic boom, was still greatly over-shadowed by the country's favored pastime - baseball - but the 1958 championship proved to be the turning point for pro football.

Played on a freezing Sunday evening in front of 64,000 fans and an estimated 45 million television viewers around the country - at that time the largest crowd to have ever watched a football game - the championship would become the first sudden-death contest in NFL history. With two minutes left in regulation, Baltimore had possession deep in its own territory, and the ball in the hands of the still unproven quarterback Johnny Unitas.

The Best Game Ever is a brilliant portrait of how a single game changed the history of American sports. Published to coincide with the 50th anniversary of the championship, it is destined to be a sports classic.

"Bowden ( Black Hawk Down, Guests of the Ayatollah) succeeds in making a contest from a half-century ago seem fresh, in part because he has a keen sense for the anecdotal. Mr. Bowden's best trick, though, is that he gets out of the way of a great story and a great game." ( The Wall Street Journal)

What listeners say about The Best Game Ever

This is a great book even if you know nothing about football or outright hate the game. The author does a wonderful job of telling the story of a history-making contest. He liberally sprinkles the story with tidbits that surprise the listener -- little things that stay with you. I never heard of Raymond Barry before but the fact that he only had one fumble in 13 years of pro-play is extraordinary. I didn't realize Landry and Lombardi were coaches for the same team! Who knew? Two legendary men working for the same team --- and they LOST ?!?!? In a sudden death overtime??? And the TV broadcast almost lost the last play??? What are the odds?
I hope the Mr. Bowden has more sports stories to tell.

If this title sounds remotely interesting to you, you're gonna love the book. Bowden has a great story to tell and does a terrific job, with lots of background information that adds considerably to the experience. Just one complaint keeps me from giving the audiobook 5 stars: the narrator, who otherwise does a good job, mispronounces many of the key participants' names, over and over and over again! How hard would it have been to get them right -- one call to the NFL office? Hey, he did get Jim Brown and Tom Landry right, and if you're young enough you'll never know the difference. Still and all, Bowden has you right there with some of the game's greatest in a truly historic and dramatic game. This is a treat not to be missed by real football fans.

Very Interesting if you like NFL Football at all!

I'm an NFL football fan, and I try to watch 2 to 3 NFL games a week. This book sounded remotely interesting, and since I had never read a book about sports, I figured "Why Not?". This audiobook was fantastic. It talked about the famous 1958 game with the New York Giants and Baltimore Colts. Honestly I didn't really think I cared about that game, but after hearing this book, I realized how big of an impact to the NFL it had. I also learned a lot about the modern day NFL, as well as about some of the old timers like Sumerall and Gifford. I was very happy I bought it, and have recommended it to all my friends!

A feel good book for more than jocks

The book started out slow as the characters were setup. But I found myself not wanting to get out of the car at the end of a day as I was listening to this book. As usual in Mark Bowden's books the characters become so real that you feel you are there.
As someone that grew up in the 60's this really brought back a lot of memories. I would recommend it.

Great book and very easy listen. If you like football and know anything about the history of the game you will love this

Wonderful. I am old enough to remember the game. But I did not all of the personal stories of the participants and their management. Well done.

Bowden does a nice job of providing backgrounds for this interesting cast of owners, coaches and players. When I realized what an amazing group of people were involved in this game, on both sides, I understand why it was a pivotal event in sports history. The game play narration and timeline were well done. I have more respect for the teams talent and coaching after listening to this book.

I've listened to this twice in the last 8 years or so. this book is entertaining and very informative. great gateway drug to NFL history.

After listening to this book, I am getting two more books by the author, Mark Bowden. I really liked the interviews after the completion of the story.

What about the other team?

The more I listened, the more disappointed I was. It should have been subtitled "From the Colts' point-of-view" or "When Raymond met John". After listening to the description of the game, it's no surprise at the end to find that the author lived in Baltimore, knew the players, and that his sister got married at Art Donovan's place. It doesn't live up to the sports books of the author's hero, David Halberstam.
The narrator needs pronunciation lessons on Marchetti, Tunnel, Katcavage. And Little Mo's first name was Dick, not Dale.
It's cool that there are some tapes from the NBC broadcast used as part of the audio presentation. People around the country may have listened to that broadcast but the author says New Yorkers listened to NBC. They listened to the Giants' football network on WNEW Radio.