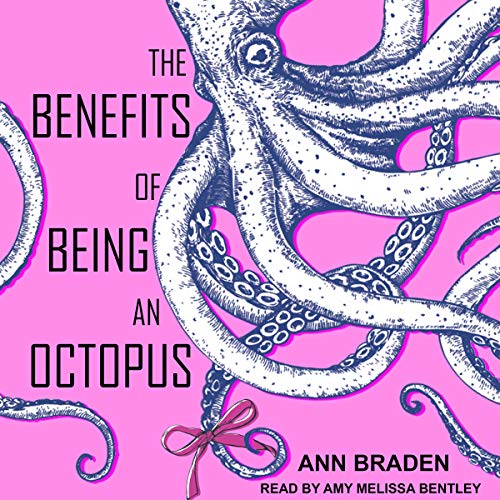 The Benefits of Being an Octopus

The Benefits of Being an Octopus

Seventh-grader Zoey has her hands full as she takes care of her much younger siblings after school every day while her mom works her shift at the pizza parlor. Not that her mom seems to appreciate it. At least there's Lenny, her mom's boyfriend - they all get to live in his nice, clean trailer.

At school, Zoey tries to stay under the radar. Her only friend, Fuchsia, has her own issues, and since they're in an entirely different world than the rich kids, it's best if no one notices them.

Zoey thinks how much easier everything would be if she were an octopus: eight arms to do eight things at once. Incredible camouflage ability and steady, unblinking vision. Powerful, protective defenses.

Unfortunately, she's not totally invisible, and one of her teachers forces her to join the debate club. Even though Zoey resists participating, debate ultimately leads her to see things in a new way: her mom's relationship with Lenny, Fuchsia's situation, and her own place in this town of people who think they're better than her. Can Zoey find the courage to speak up, even if it means risking the most stable home she's ever had?

I loved this book because it kinda gives you facts and has a story to go with it. And I like the story of a girl who became confident and the naratur is really good too. ❤️🧡💛💚💙💜

I thoroughly enjoyed this book, its characters, and the plot. I especially appreciated how it has the potential to help a person see and better understand a situation that may be different from theirs. It was beautifully written, but I think I would have enjoyed it more if I had read it to myself. I also wonder if the heaviness of these topics is a but much for middle schoolers, and I don't love how it supports a political agenda in some parts. However, it does do pretty well at showing that there is more than one way to look at an issue. I think the solution at the end was a bit simplistic, but it wasn't too "happily ever after." Overall, it was a great read, one that will stick with me, and one I will recommend to my students!

This was a great book for middle readers. I gave it five stars because I believe this book will help other kids view other people in a different light.

This was a book my son wanted to read. He asked me to read it too. I listened to it and am glad I did.

The topics in this book are so real. I could see myself and perhaps even some of my students in the characters.