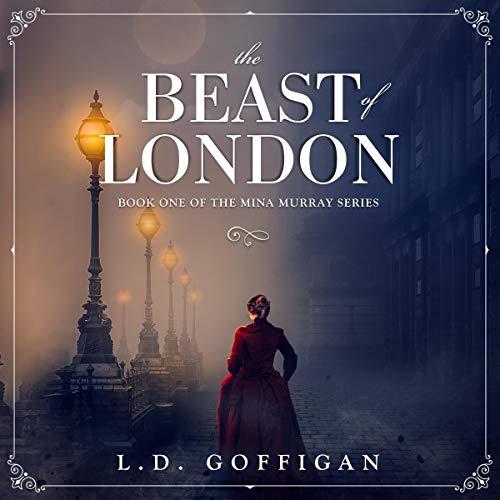 The Beast of London

The Beast of London

In this electrifying retelling of a classic tale, Mina Murray takes center stage, embarking on a dangerous adventure...

London, 1890. Mina Murray once lived an adventurous life, but after a tragedy in the forests of Transylvania, she left it all behind. Now she has settled into a quiet routine as a schoolteacher in London, engaged to the respectable solicitor Jonathan Harker, attempting to fit into the stuffy upper class London society to which he belongs.

But when vampires abduct Jonathan, her dark past comes careening into her present. Determined to rescue him, she teams up with her former paramour Abraham Van Helsing and his colleague, Scotland Yard Inspector John Seward.

You will love The Beast of London because it's a thrilling historical fantasy with romance, shocking twists, and suspense that will leave you on the edge of your seat. Scroll up and grab your copy today!

A completely fresh view of a well known tale

From as far back as I can remember I have always loved to read the old fashioned gothic atmospheric classics of the past . From Dracula to Frankenstein ... phantom of the opera and the jack the ripper tales this genre has always been my favourite. From the minute I saw the cover of this book I already knew that I would love this. They say never judge a book by its cover but I was already intrigued. I loved hearing the fresh take and concept on such a well known and classic tale. It made me rethink and look at dracula in a completely new light. Mina's character just appealed to me . She is so strong powerful and such a good female character. I urge people to listen to this novel as its familiar but yet completely new and outside of the box. I was given this book by the author/narrator in return for an honest and unbiased review

A brilliant start to the series.
I almost don't want Mina to rescue Johnathon as I love the tension between her and Abe. The side characters add to the drama and mystery.
The story is packed full of adventure and suspense. I couldn't put it down.
The narration is excellent.
I can't wait to listen to the rest of the series.

... and poorly written. The dialog and story had me rolling my eyes until they hurt.

The Beast of London review

An interesting and unique vampire story, told with excellent narration, now look forward to more from the author and narrator.

The Beast of London was a good take on the vampire genre with many familiar characters such as Mina Murray, Van Helsing, Jonathan Harker and of course Dracula. The story begins in London at the time of the Ripper murders and follows the character of Mina Murray who is now a school teacher. She is engaged to be married to Jonathan Harker and as they are out at a Society function there is an intrusion by a group of Vampires which abduct numerous people including her fiance Jonathan. Mina is in quite a state and goes on a quest to find Jonathan at all costs, she embarks on this quest with Abraham Van Helsing(her ex lover) who had just returned to town to try to enlist her help with said vampires who he believed were involved in the Ripper murders and also had bit his friends wife who was currently infected.

It is a different take on the classic Dracula story and has quite a big of action and intrigue and bit of romance and love triangle situation going on. The narration by Danielle Cohen was very good and her accents were pretty good. Overall I really enjoyed the story and some of the surprises that came to light. I am interested to see how it continues in future installments.

I received this book for free. I am voluntarily leaving this review and all opinions expressed herein are mine.

This is the first book in the Mina Murray series. It is not a standalone book and has a cliffhanger ending. None of the issues/problems raised in this book are resolved. While I can understand that the main issue may not be resolved in a multi-book story, at least resolve some minor issues to provide the reader some satisfaction or a sense of completion. I am not a fan of this type of gimmick and that's really the only reason why this book did get a five-star rating.

Here, Mina used to travel with her father, who was a researcher/scientist. After her father's death, under circumstances Mina wants to forget a d not believe to be true, she comes to London. In London, Mina becomes a teacher and engaged to Jonathon. Jonathon's mother believes Mina to be beneath Jonathon's status and is not shy about letting Mina know her distaste regarding the engagement. Mina and Jonathon attend a ball when out of the blue, Mina's former love interest Abraham shows up. Soon thereafter, Jonathon is kidnapped. Mina joins forces with Abraham to find Jonathon and hunt down the vampires responsible for her father's death.

This is a very well written reformulation of Dracula in a wonderful descriptive writing style filled with action-packed sequences, historical tidbits, plenty of blood lusting monsters, and emotional drama. The focus here is on Mina - a strong, smart woman - completely different than other women of her time - she is assertive, independent, has a job and is more than willing to break the societal mores of her time. Part of Mina's journey is discovering more about who she is and where she comes from - as well as accepting some of these facts. I loved the historical "retelling" of events if vampires were to exist.

The narrator did a great job. She complimented the story by adding a lot of emotion and tension to her reading. This was the first time that I have had the opportunity of listening to her work and I really enjoyed it.

New Twist on a Character I Love

The Beast of London by L.D. Goffigan was so good! I loved the new twist on the character of Mina from the Dracula stories. I was immediately pulled into this book. The author wrote vivid imagery and great details. This book was classified as Supernatural and Paranormal under Mystery and Thrillers. I found it to be so much more. I will definitely listen to more books by this author and narrator. Danielle Cohen was magical bringing the characters to life. She has a rich articulate voice that is perfect for this time period listen. I requested this review copy auidobook and have voluntary written this review. I definitely want to continue this Mina Murray series.

I’ve already bought the Next Book.....

I’m gushing over this book! This retelling of Mina, Johnathon, Lucy and Van Helsing’s story had me completely engrossed. I love when a talented and articulate author dares to retell a classic like Bram Stokers Dracula. Creating a new backstory and bringing the mystery and adventure forward is exciting. I love Mina apart from her internal/external repeated dialog of “we must find Johnathon” (we get that...it’s why you left London). Is something/someone following them to Transylvania? HA! No Spoilers.
The Narrator on this book was EXCELLENT! I was completely immersed. I’m actually bummed the next book isn’t on Audible but I already bought the next book on Kindle anyway!

*I was given a free copy of this book in lieu of an honest review ......and it is this book comes highly recommended by me.

Not your average Vampire story! 👍🏼👍🏼

I enjoyed listening to this! It was a bit slow in the beginning but picked up rather quickly. It is a quick listen and I was ready to listen to the following book due to the big cliff hanger at the end!! Ugh! No recording for the second book yet! The narration was excellent! The voices for each of the characters were done so well and I was able to distinguish each from the other. Great story about a strong young woman in a mans world who can hold her own and throw a knife! Well done!

I really enjoyed the NON sparkly vampire with iconic literary characters.
The writing was tight; the world building incredible; the characters were tangible and realistic; the plot was unique and magnetic.
Reviews of the second book were less promising. As much as I want to pick up the next in the series, I’m uncertain if I will.
I enjoyed listening to Danielle Cohen. She did a wonderful job! I would definitely listen to more from her.

This is my voluntary review of an audiobook received for free.

Such an intriguing and enchanting read that will give you the chills!

Suspense. Romance. Twists and turns. Surprises. This book delivers on that and so much more!

I thought that this was a very well done audiobook. This is a Dracula retelling but I really cannot make any comparisons since I have yet to read the original. I was drawn to this story because I tend to enjoy a good vampire story and the time period of this tale was really interesting. This turned out to be a very quick read for me and a highly enjoyable one as well.

Mina Murray was a really interesting character. She was not like most of the ladies you would find in London during the 1890s. She cares less about society and propriety than her peers. She is engaged to a man that seems to be her perfect fit who loves her just as she is. When Jonathan is taken, she must do everything in her power to find him before it is too late.

I loved the way that vampires were represented in this story. I thought that the evidence that they have been around for quite some time was very well done. I liked that their presence was shown in various ways including the after-effects of an attack in a young woman. There was a lot of emotion tied to some of these events and I found them quite exciting.

I thought that Danielle Cohen did a fantastic time with the narration. This was the first time that I have had the chance of listening to her work but I think she added a lot to the story. I felt like she was able to add a lot of emotion to her reading and she handled all of the character voices very well. I had no problem listening to this book for hours at a time.

I would recommend this book to others. I thought that this was a very well done vampire story with some great characters. I do hope to continue with this series!