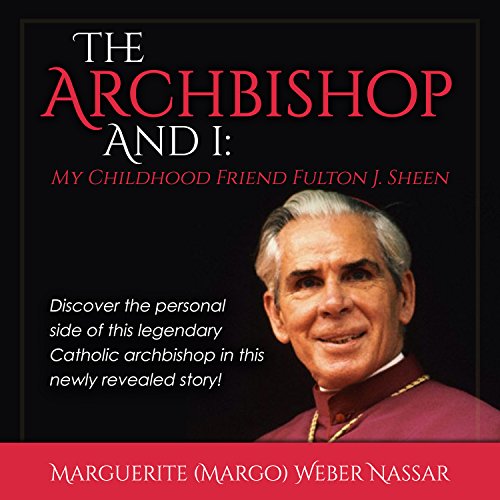 The Archbishop and I

By: Marguerite Weber Nassar
Narrated by: Angie Hickman
Try for £0.00

Uncover the personal side of Catholic Archbishop Fulton J. Sheen! Enjoy this newly revealed story of his intergenerational friendship with a slightly sassy and irreverent 11-year-old girl with a mystical bent. Her inner light shone so brightly that even the Archbishop stopped and took note. Hear Marguerite's entertaining and true-to-life story about her delightful four-year relationship with this Emmy award-winning TV star, Catholic Church great, and giant in twentieth century American history. Discover the positive impact this charismatic Archbishop had on her life's direction and values. As a child, Marguerite believed Archbishop Sheen when he described himself humbly as a professional speaker. It took time before she realized the depth of his celebrity. In a uniquely innocent friendship, she shared stories of her Pacific Northwest vegetable garden, and he, of his travels. After several initial meetings, they became devoted pen pals. Get your copy of this entertaining - up close and personal - glimpse into the life of the famed Archbishop Sheen. Discover what he was like in person!

What listeners say about The Archbishop and I

This was a disappointing, albeit short read - completely confusing, not in context, poorly read, even somewhat dubious. Seems like an odd character sketch inside the vague events described as the author's life. Nothing of substance, don't waste your time or money.