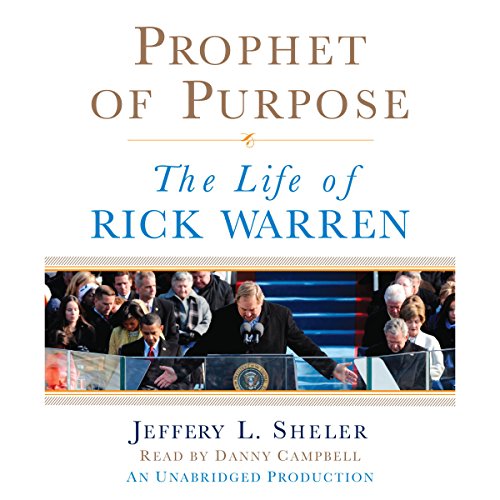 Rick Warren is arguably the most influential man in American religion today. Megachurch pastor, friend of world leaders, and trend-setting spiritual entrepreneur, he is widely recognized as the new public face of evangelical Christianity in America. No other modern churchman has matched his success as a leader and motivator of Christians. His book, The Purpose-Driven Life, is the best-selling nonfiction hardcover of all time, with more than 25 million copies sold. At a time when evangelicalism stands at a political and cultural crossroads, his stature continues to rise.

But who is Rick Warren? What can be learned from the story of the man behind the message? And what does his life say about the state of Christianity today?

Prophet of Purpose: The Life of Rick Warren traces the road Warren has traveled, the influences in his life, his trials and temptations, and the opposition he has encountered along the way. Honest, thorough, and insightful, it explores his spiritual coming of age during the turbulent 1960s, his principled determination to sit out the divisive battles between fundamentalists and moderates in the Southern Baptist Convention in the late 1970s, and his audacious endeavor in the 1980s to build a "church for people who hate church" in the suburbs of Los Angeles. From a handful of worshippers meeting in a tiny apartment, he grew a vibrant congregation of over 22,000 and a global network of pastors who follow his strategies for building churches and transforming lives.

In this unofficial biography, Jeffery L. Sheler, who had unfettered access to Warren and those closest to him, presents an intimate portrait of Warren as a man of faith and vision but also of flesh and blood and human foibles - a pastor, communicator, philanthropist, and family man who is driven by a sense of divine purpose to complete the course his God has set before him.

Prophet of Purpose brings Warren and his mission to life and provides a provocative gl...

"A compelling read about a man in the middle of so many of the issues of our time." (Senator John F. Kerry)
"Prophet of Purpose is essential for anyone who wants to understand America's most prominent pastor and the tectonic shifts on the religious landscape he represents." (David Neff, Editor-in-Chief, Christianity Today)

I learned so much from this book. things in history conflicts around the world and I was just enthralled. I have read The Purpose Driven Life the number of years ago. It was so nice to get the rest of the story.

Save one more for Jesus!!

we can all learn from a great man of God like this! I wanted to listen to the whole book in one day!

The absolute best book ever !

Ironically, I was going to listen to some classic rock on Pandora and when I tapped on the pandora icon, my audibles opened to a book that I book marked and it started playing. .. The absolute best book that I have ever listened/read!
it began at the beginning of my road trip and ended as I pulled into the parking lot of my neighborhood restaraunt.

I loved this book and have gained a new appreciation for Rick Warren and his vision for the Kingdom of God.