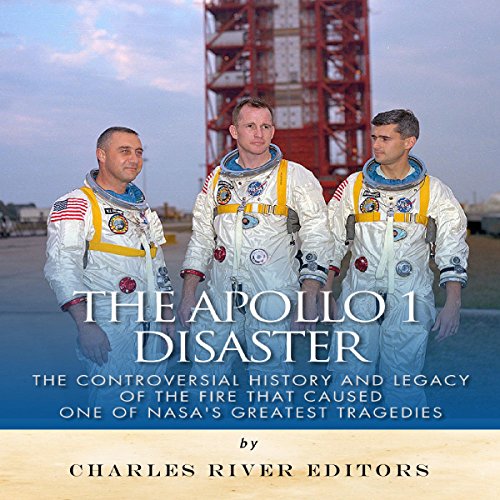 The Controversial History and Legacy of the Fire that Caused One of NASA's Greatest Tragedies
By: Charles River Editors
Narrated by: Bob Barton
Length: 1 hr and 40 mins
Categories: History, 20th Century
2 out of 5 stars 2.0 (1 rating)

"There's always a possibility that you can have a catastrophic failure, of course; this can happen on any flight; it can happen on the last one as well as the first one. So, you just plan as best you can to take care of all these eventualities, and you get a well-trained crew and you go fly." (Gus Grissom, December 1966)

The Apollo space program is the most famous and celebrated in American history, but the first successful landing of men on the moon, during Apollo 11, had complicated roots dating back over a decade; it also involved one of NASA's most infamous tragedies. Landing on the moon presented an ideal goal all on its own, but the government's urgency in designing the Apollo program was actually brought about by the Soviet Union, which spent much of the 1950s leaving the United States in its dust (and rocket fuel). In 1957, at a time when people were concerned about communism and nuclear war, many Americans were dismayed by news that the Soviet Union was successfully launching satellites into orbit.

Among those concerned was President Dwight D. Eisenhower, whose space program was clearly lagging a few years behind the Soviets' space program. From 1959-1963, the United States worked toward putting satellites and humans into orbit via the Mercury program, but Eisenhower's administration was already designing plans for the Apollo program by 1960, a year before the first Russian orbited the Earth and two years before John Glenn became the first American to orbit the Earth.

If you are interested in Apollo program and moon landing. This is a important part. Many of the Apollo astronauts state that even as sad as this incident was it most likely Helped the program get to the moon and be as successful as Apollo was. This terrible incident really was able to expose issues with the Block 1 spacecraft and lead to many many changes for the very reliable Block 2. This is really a detailed technical book and having some prior exposure to the space program and the machines used would be VERY helpful. The only reason I gave low marks on Story is that it really does NOT apply to this book. But that in no way is really a negative. If there is any item I wish they included would be when it comes to the communication the narrator reads quoting. I think they should have included the actual audio allowing the listener to actually hear and understand the chain of events and the frustration at on going problems. Other than that this is a positive review