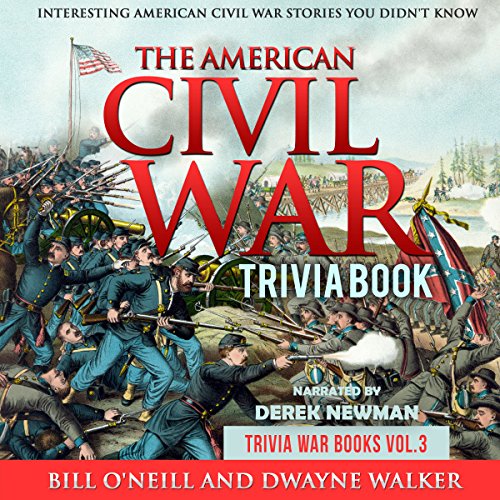 By: Bill O'Neill,Dwayne Walker
Narrated by: Derek Newman
Try for £0.00

If you went to school in the United States, you probably learned about the Civil War - but this audiobook won’t be like what you learned in history class. Maybe your teacher took the controversial stand that the Civil War was all about states' rights...or maybe you learned all about the horrors slavery, but never quite figured out why things didn’t get better after the war ended.

If you didn’t go to school in the United States, things are even more confusing. When the media is full of references to the Confederate flag, the legacy of slavery, and poverty in the American South, you might have a vague sense that things are bad because of the Civil War...but why? Why does a war that happened over 150 years ago still cast a shadow over the United States?

This audiobook will tell you why. It will lead you, step-by-step, through the causes of the Civil War and the effects. But unlike your high school history teacher, it won’t put you to sleep with long-winded biographies and lists of dates. The names you’ll learn are the big players, the ones with big personalities who made big differences.

In just a few minutes a day, you can hear bite-sized stories from the Civil War - quick, easy explanations to guide you through the main points, with just enough scary, surprising, or just plain strange facts to keep you coming back for more.

Each chapter ends with a bonus helping of trivia and some quick questions to test your knowledge.

By the time you’re finished, you’ll know all the facts your history teacher never taught you - from who said slavery was a "positive good" (and why they thought that), to who dressed up in women’s clothing to escape from Union soldiers.

Have you listened to any of Derek Newman’s other performances before? How does this one compare?

He did a good job with the material he had to work with.

Perhaps it is because I am rather well read on the Civil War, but I was expecting to learn of some obscure (i.e. trivial) happenings and outcomes of the war. Aside from learning that the can opener was invented during the Civil War, the rest of the book was a brisk walk through the basics leading up to and throughout the Civil War years. Although there is a lot of accurate information presented, it often comes across as having a bit of revisionist history ring to its content. For example, there was a section speaking of current day racism is fueled by poor white folk in the South; "Is it okay to carry a Confederate flag today?" Although reasonable questions, they have no bearing on trivia matters during the Civil War period. In short, the book just didn't like up to it's title, in my humble opinion.

That being said, the book did flow pretty well, was an easy listen (perhaps because it was full of general knowledge info?), and the narrator did a nice job. As for recommending this book I would have to say yes I would with the caveat being that the target audience would be those tha wanted a general overview of the Civil War period in America. A review copy of this audiobook was provided by the author, narrator, or publisher at no cost in return for this unbiased review. If you found this review helpful, please take a moment to click yes below.

Facts and people that you didn't know about

I enjoy a lot of Civil War stuff, from movies to books. I've never done reenactments, but have considered it from time to time. I've got a pretty extensive knowledge on the subject, but these fellas hit me with some things I'd never heard of before.

I enjoy how they split the book up, 6 parts in total, replete with a quiz at the end just to see if you were paying attention! This would be a good book to help prepare for a civil war history class, going into an environment in which this could come up in a discussion, or just reading it for your own edification and interests. I really enjoyed how the book focused on some NOT so well known players, such as a 10 year old kid. Yes, big names are used, but it's those in the background that you haven't heard of (most likely) that really piques one's interest.

History buffs should really enjoy this text, so should anyone who teaches the subject, because it reveals alot of truths that are glossed over or never discussed. I just learned that this is part of a War series, and that the series is not just about the Civil War. I will be looking into those books as well in the future. Even though I did receive a promo code for this review it in no way influenced my considerations of the material, and in fact, inspired me to be more honest. In fact, getting a code generally makes me harsher as a reviewer as I am more often concerned what someone like ME will decide based on my review.

Get this book and get to learning the truth and hidden facts about the Civil War.

fortunately there aren't any

by mouthing meticulous metaphors of merit

seriously more errors, proofreader was either deaf or dead

high school students do as good a Job

book has many problems with story accuracy. many parts are just not correct.
it's also wrote from a political perspective.

Really interesting content for any civil war buff ...... provides a lot of background to the normal discourse about battle formations and flanking maneuvers. All in all, there were backstories and interesting facts that really bring the issues to the forefront. No revisionist history, either, in terms of the real intent of secession and the glorious nature of all leaders on one side or the other.

Still, there were some continuity errors, some erroneous statistics (really just grammatical, not mathematical) In the performance, there is no such place as Appopomatax, and there are at least 3 instances in which Andrew Johnson was called "Jackson" .... that sort of thing. But on balance, i enjoyed the ride very very much.

Sloppy history. Lots of errors. Where was the editor for this? Wasn’t it proofread before they did the audiobook? The narrator pronunciation was off at times.

Yes. The authors allow us to see their personal opinions and it is refreshing to hear the KKK referred to as the terrorist group it is.

Plus, it's a pretty short delve into a really complicated issue, but they cover the basics rather well.

Not really applicable, as we mostly just get Cliff Notes on some of the biggest players in the Civil War

The team have a great way of writing and narrating this facts to bring just the right amount of dark humor.

Not Trivia - Not Worth It

•audiobook•
As other reviews pointed out, this is not a trivia book on the Civil War. It included highlights of reasons for the war, depending on the POV from the North and South.
Several prominent figures were brought up, but basic information.
Life after the war (including several decades later) was talked about; but I wasn’t expecting that.
It could be recommended as a prerequisite for Civil War studies, but not for anyone who has had any education that included it.
This author has several other Trivia books out; perhaps I’ll pick up one if the topic or war was something not covered in my primary schools, like the Vietnam War, which was discussed in like 2 days in high school.
Derek Newman was exceptional with his delivery and kept it interesting.

I got this free - and here’s my review.

I’ve literally read hundreds of civil war books but when I was offered to receive a review copy I decided I’d give it a chance since even if you are well read on something you can generally learn something new from a trivia book.

Well first and foremost it’s not what I would call a trivia book, it’s just a very simple overview of events of the civil war with quizzes at the end of each chapter. There’s a few trivia facts in the book - but it’s not a trivia book.

Next up is the content. Ugh. Amateur, politically correct, extremely light on knowledge. Yes the book is short at under 4 hours - but I really don’t know what you’d learn here that would be of any value. The content is written like it’s a 2018 public school text book, which isn’t a good thing since that means it’s extremely light on history and not written in a compelling manner. As for bring PC, yep, this is written for the generation of people that have to hear a disclaimer for 5 mins before anything of note is said in case it offends anyone. Also the insight into events is very swallow and extremely predictable.

It’s impossible for me to recommend this book to anyone as it’s just not well written, not a trivia book, and is much too lightweight to serve as even an introduction - for the time spent here you could learn a lot more in a basic overview of the war.

In closing I honestly believe the only thing I learned, the only thing, was the can opener was invented during the civil war, which is covered in like the first 10 mins of the book when the author spends 15 mins telling you how much you’re going to learn by reading this book. Times are approximate, not being literal in terms of time.

Sorry to bash the book after getting it for free, but those are the breaks when you ask for honest reviews.

The narrator for the book was fine and gave a professional reading.