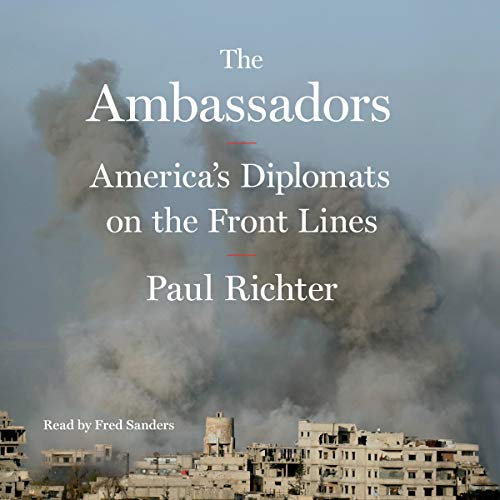 By: Paul Richter
Narrated by: Fred Sanders
Try for £0.00

Veteran diplomatic correspondent Paul Richter goes behind the battles and the headlines to show how American ambassadors are the unconventional warriors in the Muslim world - running local government, directing drone strikes, building nations, and risking their lives on the front lines.

The tale’s heroes are a small circle of top career diplomats who have been an unheralded but crucial line of national defense in the past two decades of wars in the greater Middle East. In The Ambassadors, Paul Richter shares the astonishing, true-life stories of four expeditionary diplomats who “do the hardest things in the hardest places”. The book describes how Ryan Crocker helped rebuild a shattered Afghan government after the fall of the Taliban and secretly negotiated with the shadowy Iranian mastermind General Qassim Suleimani to wage war in Afghanistan and choose new leaders for post-invasion Iraq. Robert Ford, assigned to be a one-man occupation government for an Iraqi province, struggled to restart a collapsed economy and to deal with spiraling sectarian violence - and was taken hostage by a militia. In Syria at the eruption of the civil war, he is chased by government thugs for defying the country’s ruler. J. Christopher Stevens is smuggled into Libya as US Envoy to the rebels during its bloody civil war, then returns as ambassador only to be killed during a terror attach in Benghazi. War-zone veteran Anne Patterson is sent to Pakistan, considered the world’s most dangerous country, to broker deals that prevent a government collapse and to help guide the secret war on jihadists.

“An important and illuminating read” (The Washington Post) and the winner of the prestigious Douglas Dillon Book Award from the American Academy of Diplomacy, The Ambassadors is a candid examination of the career diplomatic corps, America’s first point of contact with the outside world, and a critical piece of modern-day history.

What listeners say about The Ambassadors

A Must Read about America's Best Diplomats

This book is a superb summary of what the best American diplomats do in the toughest of places. Often unsung heroes, each of the four Ambassadors profiled have made their share of headlines over the years both in the countries in which they served and here at home. Diplomacy is a tough job and, after hearing how well we have been served by Ryan Crocker, Anne Patterson, Robert Ford and Chris Stevens, I more deeply appreciate the sacrifice and grit of these and other public servants. Impressive and patriotic Americans all.