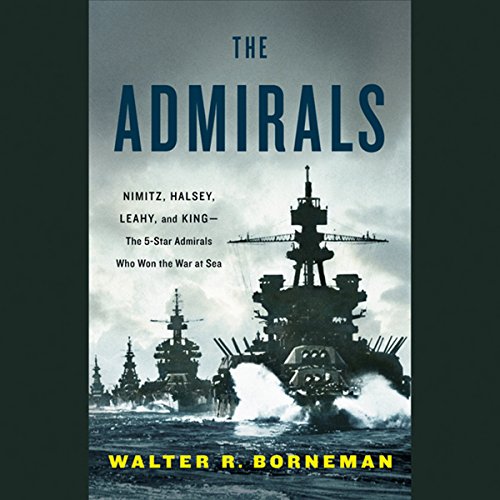 By: Walter Borneman
Narrated by: Brian Troxell
Try for £0.00

The Admirals tells the story of how history's only five-star admirals triumphed in World War II and made the United States the world's dominant sea power.

Only four men in American history have been promoted to the five-star rank of Admiral of the Fleet: William Leahy, Ernest King, Chester Nimitz, and William Halsey. These four men were the best and the brightest the navy produced, and together they led the U.S. Navy to victory in World War II, establishing the United States as the world's greatest fleet.

In The Admirals, award-winning historian Walter R. Borneman tells their story in full detail for the first time. Drawing upon journals, ship logs, and other primary sources, he brings an incredible historical moment to life, showing us how the four admirals revolutionized naval warfare forever with submarines and aircraft carriers, and how these men - who were both friends and rivals - worked together to ensure that the Axis fleets lay destroyed on the ocean floor at the end of World War II.

What listeners say about The Admirals

Fantastic Insight In To Another Side Of the War

Yes, it was interesting, had a great pace, and I always felt like I was connecting with and learning about the people involved.

Well, they're all pretty amazing people, but this book helped me gain a greater appreciation for Nimitz as a person and for his role.

What does Brian Troxell bring to the story that you wouldn’t experience if you just read the book?

His narration was never distracting, and always engaging. His voice and tone were perfect for the narrative.

Well, there were a lot of moving moments, but the part about them dealing with their own family losses in the war was very sad.

I didn't listen to a spot of music the whole time I was reading this book, and normally I switch off between an audiobook and music for my commutes. I didn't want to listen to anything else the whole time. I highly recommend this to anyone interested in history and these great men's place in it.

Borneman narrates their lives in sometimes intersecting parallels until World War II. King was from a Scots’ family from Ohio. He graduated near the top of his Annapolis class and also graduated from Sub School. William Leahy was from a Wisconsin Irish family. He graduated from Annapolis 14th out of 27. He was a gunnery officer aboard the Battleship Oregon during the Spanish American War. He spent 40 years on battleships. William Halsey was from New England. He graduated 43 out of 62 from Annapolis. His first assignment was on the Battleship Kansas. He then went to Aviation School and earned his wings. Chester Nimitz was from a German immigrant family from Texas. He graduated Annapolis 7th of 114. He was known as the calm strategist. They were all great leaders able to motivate subordinates and peers. During WWII FDR was skilled at placing key people in the right place at the right time. FDR appointed Nimitz as Commander in Chief of the Pacific; Halsey in Command of the Pacific 3rd and 5th fleets; King as Commander in Chief of the Navy and Chief of Naval Operations; and Leahy as FDR’s military advisor, titled Chief of Staff to the Commander in Chief. This position was only used in World War II.

The book is well written and meticulously researched. The author deftly manipulates multiple narrative strands while providing lots of details. Borneman is a military historian and is skilled at archival research. It is amazing that these men who spent their lives in battleships were able to immediately realize that the days of the battleship were over and adapt to the aircraft carrier and submarine for warfare. I learned a lot from reading this book and also enjoyed reading the book. The book is fairly long at about 18 hours.

Brian Troxell does a good job narrating the book. Troxell is an actor, voice over actor and audiobook narrator.

Would you listen to The Admirals again? Why?

Brian Troxell does a fantastic job narrating the book. This was my first time listening to an audible book and was a memorable one. I'm hooked.

As a 36 year Navy Veteran, I knew of Admiral William D. Leahy but not much about him. This book will go a long way in helping aquaint this important but little known Naval and National leader to Americans who read or listen to this book.

I would recommend this book to anyone interested in World War II History. There are thousands of books about battles in the war, and fewer still about the great military leaders and their interaction in the War. Most are biographies about the leaders themselves. This one is in a class of its own giving not only short biographies of each of our Nations only Fleet Admirals, but their leadership styles and interaction during the crucial war years and their roles in building today's modern United States Navy.

The author provides a concise history of America's four fighting admirals in context with the development of sea power from the turm of the century through World War II. While not a detailed biography, it is an excellent survey of the men and the circumstances of their rule.

What made the experience of listening to The Admirals the most enjoyable?

The total information on each man, his background, family, and interactions with each other.

When Pearl Harbor was bombed.

Heavily detailed recap of the path to history of four extraordinary individuals. On the journey, I learned a lot about how battles are planned, fought, won and lost. Moreover, with hindsight, a clearer understanding of what it takes to win a war the old way.

What did you love best about The Admirals?

The early careers of each of the admirals

When Nimitz's plane crashes in San Francisco Bay and he is sitting on the wing. His interactions with the two enlisted men was priceless.

How the Navy grew from a fifth-rate power to the perennial navy power in the world.

Where does The Admirals rank among all the audiobooks you’ve listened to so far?

One of the more enjoyable, listenable and interesting.

What other book might you compare The Admirals to and why?

I also enjoyed Unbroken by Laura Hillenbrand. I just love the military detail intertwined with dramatic storytelling. The Admirals provided a full perspective on the group of men it took to win a war, not only at sea on two fronts but on land in Washington. Whether it's Louis Zamperini in Unbroken or any of the four admirals in this book you learn about, by far most people have no idea as to the extent of sacrifices that those in the military make, yesterday or today.

Have you listened to any of Brian Troxell’s other performances before? How does this one compare?

Have not listened to his other readings.

The author and performer relay the tale of the loss to Admiral Leahy of his wife due to illness, in a way that leaves no doubt to the reader that this man truly loved his wife.

I heartily recommend this audiobook to WWII, U.S. Navy and general military/political history fans. There's "a little bit more" to Halsey, Nimitz, Leahy and King than you learned in U.S. History class.

One of the best audio books I have listened to.

Where does The Admirals rank among all the audiobooks you’ve listened to so far?

This is at the top of the list I have heard. It was nice to hear stories of naval history.

The admirals response to the attack of Pearl Harbor.

The way he was able to show the different moods and expressions of the admirals was remarkable.

How the admirals were different, but alike in so many ways. They had differents ideas of how to lead, but will be forever known as the best the Navy has seen.

It kept my interest in the story of these four great men the whole book. The details in which the author went to, to explain events before during and after the war was perfect to me. I plan to listen to this book again. Matter of fact right away!