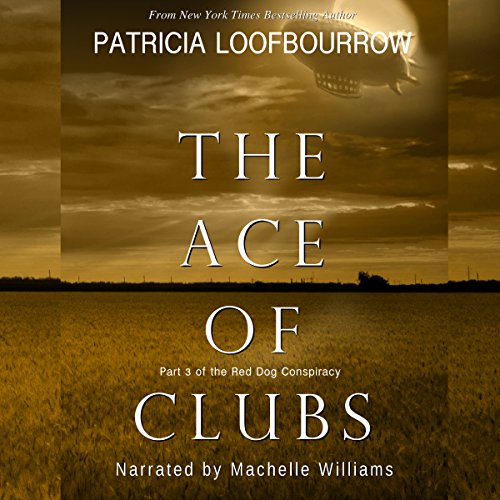 The Ace of Clubs

By: Patricia Loofbourrow
Narrated by: Machelle Williams
Try for £0.00

Could you betray your family to buy your freedom?

The one secret which could destroy everything....

After financial disaster and the zeppelin bombing, the far-future, domed, neo-Victorian city of Bridges is reeling. Three of the four Families are implicated, and an inquest is called to investigate.

After her failure to prove Jack Diamond's guilt in David Bryce's kidnapping and the murders of her informants, private eye and mobster's moll Jacqueline Spadros has had enough. While she and her former lover Joseph Kerr try to learn who killed their family friend, they also begin making plans to leave the city.

Her tormentors, however, are just getting started. As their web of lies and forgery draws ever tighter, Jacqui begins to see how deep the conspiracy against her and the Spadros Family really goes.

When she's called as a witness in the inquest, the secrets Jacqui has kept over the years come back to cause her serious trouble. Will she be able to escape Bridges? Or will she be forced to face the terrible consequences of her lies and trickery once and for all?

This is part three of a 13-part serial novel:

Note: While it's not mandatory to have enjoyed The Jacq of Spades and The Queen of Diamonds, it's highly recommended that you do so before venturing forth.

What listeners say about The Ace of Clubs

I'm still warming up to the characters

Note: This is Book 3 in the series and the books really need to be read in order to get the plot.

So far, I have been luke warm about this series but finally here in Book 3 the story is growing on me. I finally have the setting down. Yay! Some distant major event dropped humanity down a few notches and we now have domed cities and dirigibles and women have very few rights. Jacqui finds these restrictions chaffing and she uses her talents to step outside those rules. And that is the main reason I like Jacqui. I find she’s a bit of a twit from time to time yet her character keeps drawing me back into this tale.

The plot picks up shortly after the events of Book 2. There’s a major inquest into the explosion that took out a dirigible and killed several people including a friend of Jacqui’s. More than one of the major families is under suspicion, including the Spadros. Even as the families pull into tight, defensive groups, Jacqui still has her own motivations and sometimes is a bit oblivious to the political dangers she’s straying into.

That is one of the things that still tickles at me. Supposedly Jacqui has been trained since the age of 12 to be a good Spadros spouse. Yet she still lacks some basics, like not knowing some Italian, who to invite to dinner without starting a war between families, etc. Perhaps she had bad teachers? But I tend to think that Jacqui can be a little dense in regards to such things. I can’t help but think that this part of her character could have been cleaned up a bit, sharpened, made clear.

Tony Spadros keeps earning my respect. He finally has some big reveals about his wife and her secret activities and contacts. I really wanted Jacqui and Tony to join forces and become a cohesive team to take on the world, but that didn’t happen. Instead Jacqui is still hung up on Joseph who is just as caught up in her. Joseph is still a stick figure. I wish we had more about his character. After 3 books, we still know little about him other than he has strong feelings for Jacqui.

The story ramps up as things start to fall apart for Jacqui. Most of her secrets have been pried out of the closet. Her list of allies and friends is dwindling. Her choices are narrowing. Even with that, she’s still holding onto her core values. The story does end on a cliff hanger. The fate of the main characters is all up in the air. 4/5 stars.

The drama in this series is intriguing. This 3rd installment seemed so short, I can't wait for what is coming next! This author has done a great job and the audio voice is so diverse.

Welcome to part 3 of the Red Dog Conspiracy with the Ace of Clubs. I believe this is the best of the first three books thus far. But I had to remind myself that this is a 13-part serial novel! Quite interesting, eh? Indeed. The plot begins to take shape in this book when more secrets are revealed and things are brought out into the open. The Family crime drama continues…

Narrator Machelle Williams has a sweet voice and has a way of luring into the story. Each book gets better with her performance and familiarity with the characters. I’ll do a full review of the her performance soon on the AudioSpy.

The Ace of Clubs

The more I read of this series, the more I like it! Upon reading the first book, I found myself struggling to follow the story at times. But, as it progresses, it really grows on you!

Take a mix of Dickens, steampunk, mafia and mystery and you get an idea of what this series is all about.

The author does a fantastic job with the atmosphere of the Quadrants. The whole book has a dark, malevolent feel to it and the reader can really feel the emotions as Jacq goes through the trials of her life. The narrator does a very good job in adding to this feeling....her voice really conveys the despair as Jacq is betrayed over and over again.

I can't wait to see how Ms. Loofbourrow wraps up this series.