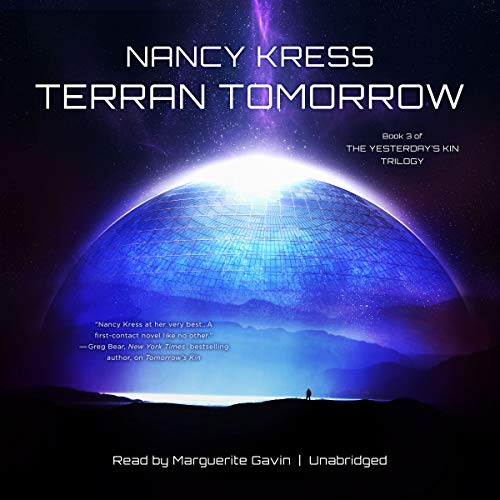 Nancy Kress returns with Terran Tomorrow, the final book in the thrilling hard science-fiction trilogy based on the Nebula Award-winning novella Yesterday's Kin.

The diplomatic mission from Earth to World ended in disaster, as the Earth scientists discovered that the Worlders were not the scientifically advanced culture they believed. Though they brought a limited quantity of the vaccine against the deadly spore cloud, there was no way to make enough to vaccinate more than a few dozen. The Earth scientists, and surviving diplomats, fled back to Earth.

But once home, after the 28-year gap caused by the spaceship transit, they find an Earth changed almost beyond recognition. In the aftermath of the spore cloud plague, the human race has been reduced to only a few million isolated survivors. The knowledge brought back by Marianne Jenner and her staff may not be enough to turn the tide of ongoing biological warfare.

What listeners say about Terran Tomorrow

Definitely do the entire trilogy

standing alone, I'm not sure how much I would have liked them but the 3 together were really good. there could even be s 4th. I'd be interested in it.

I confess I almost gave up listening to Book One. Incomplete storylines and cliched characters had me cringing. But the overall idea felt fresh so I hung in there.

You may not put this on the shelf next to the Expanse series. But it's an entertaining listen!

Great trilogy, but annoyed about the ending

starts off with a bang just like the 1st two. Fun new adventures back on earth. Not as enamored with the militarism of the 2nd two books, but they fit and the author seems to have done her research. The reason I docked it a point was for the ending tho...
SPOILER...
...
...
Really? A time loop paradox ending? Come on. Doesn't even really contribute anything to the fundamentals of the narrative imo. Just kind of stuck in there at the end after everything has been resolved already anyway. LIke midichlorians in star wars - quantify it and take all the magic away. I just try to pretend that it didn't happen or that they will be proved wrong about it in the non-existent next book.

I enjoyed this entire trilogy. It was very well-designed with great detail into the science involved. characterization was good, action sequences were well written and well-designed. although this book is an excellent piece of work oh, it will not stand well by itself. I recommend listening to all three books of the trilogy in sequence.

more interesting than previous, but disappointing

This author has a dark vision of humanity that is depressing. The entire trilogy is plagued by this idea that humans cannot succeed at doing/being better as we exist right now; that it will take major evolutionary leaps forward for us to survive as a species; that we are doomed and there is no hope for us. If you are trying to cheer yourself up this isn't the series for you.

I loved it. I thought the story was original and took some turns I wasn't expecting. Well written characters. I also liked the narration. I think the narrator had her work cut out for her with some of the character names and she did a great job giving each character their own voice.

I enjoyed it more than book 2, and it kept a consistent pace, which I appreciate. Again, like book 1, there was incredible potential for a very deep dive into the science, betrayals, and characters. I feel I only had a glimpse of who they were, what they felt and why they choose the paths they do, leaving me hungry for more of the story.

A waste of time!

The author wrote themselves into a corner and then just wrapped up the story without resolving any of the plot threads. Everyone left in the ship to go back to World. There was no explanation for what was going in at HQ, or with New America or The Gaians. They just packed their bags and left the planet with plans to go to the other planet.