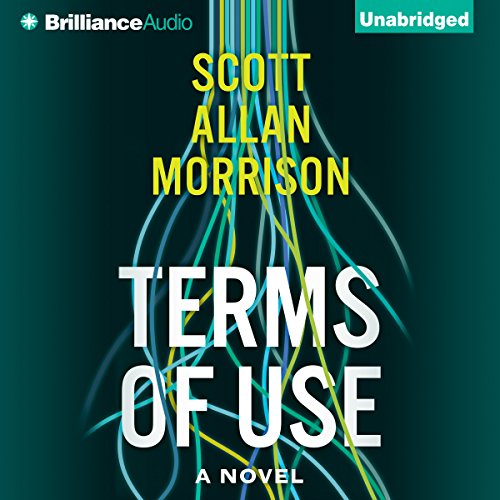 Circles is the most popular social network in the world: vast, ubiquitous, and constantly evolving. Days before expanding into China, Circles suffers a devastating cyberattack - and a key executive is brutally murdered.

As he fights to save the company he helped build, top engineer Sergio Mansour uncovers evidence of a massive conspiracy that turns the power of Circles against its users. But as Sergio investigates, someone is watching his every move - someone ruthless enough to brand him a criminal and set a vicious hit man on his trail.

Desperate to clear his name, Sergio turns to Malina Olson, a beautiful and headstrong doctor who has an agenda of her own. Now, he and Malina must survive long enough to expose the truth in a world without hiding places, where a single keystroke can shift the global balance of power.

Social media and how it can be used against us... Great performance and believable story!

Creepy how Morrison stole from headlines he could not have read! This book, written before America's 2016 election is impossibly close to the hottest of the moment's conspiracy theories.... And yet it precedes any of them. Scott Allan Morrison is delightfully prescient.

WARNING get this book quickly and get listening. It will have a brief shelf life in terms of its plot. David Colacci again creates an ensemble, an emotional sense and an effective drive that brings the breathless conclusion to life.

The right to privacy. Is it possible anymore in our digital society? This is a fairly fast moving book which capitalizes on some of the conspiracy theories out there regarding social media and its impact on current events. I thoroughly enjoyed it and think it should be read soon as to not outdate itself in the near future as technology is changing so fast. Circles resembles a popular social media site for the present but possibly not the future. Just sayin...

The scariest part... is that it could happen

Welcome to a vision of the future that has roots in now. Actually, this isn't really the future. Circles is the biggest and the best social media platform on the Internet. People log in all day long because they are tied to it in ways that keep them coming back for more. And Circles is trying to keep them there even longer. Suddenly, Circles is hacked and hacked professionally. They didn't even realize what was going on until it was too late. One of the main people in the innermost part of Circles (called Labs) is then brutally murdered that night. Once Sergio begins to look into what was happening he quickly goes into a rabbit hole like scenario where every turn could cost him his life.

Narration for Terms of Use was done by David Colacci and he absolutely kills it (pardon my pun). Colacci has one of those voices that allows him to talk about a brutal murder scene one minute, and the next explain details about a social bot problem on the Circles network. The quality was perfect, just like every other Brilliance Audio recording that I've ever had the pleasure of listening to.

Well, this book grabbed me by my ankles and pulled me under quick. It just launched me into a world that I'm semi-familiar with (the tech world) and then threw me under a bus when they started revealing some of the back-plot of the story. If you wanted to know what a technothriller was--this is a wonderful example. Taking the techno part is the inner workings of Circles. It's explained in a way that I think that anyone could understand, but not left too vague so that those that are "in the know" felt tickled as well. The triller part was dead on. You've got dead bodies, car chases, gun-fights, hostage situations, and more. What more could one ask for?

Overall, I'm sad that I put this book off for so long (only a month or so). I really enjoyed it and found myself staying up to find out what happened next. The length was perfect, it wasn't too long where it felt like it was dragging out, or too short where the author left me begging for me -- it was just right. The proverbial three little pigs moment.

I will definitely be looking forward to books to come from Morrison.

Did this review help? Vote for it! Want to see more like it? Check out BriansBookBlog DOT com.

This story was slow at times but overall a good book. It was very detailed and thought out and I actually learned a lot from it even though it was fictional. I saw so many parallels to things that are going on in the world right now. Wish there was a second book!

This book won't blow you out of the water, but it is easy to relate to the story and the characters. It is also scary how close to real life it can be. I think the narrator did a great job to bring the story to life. Give it a try!

This book has it all. It attracted me because of the tech stuff, then comes a murder and our hero has to go on the run. He runs right to a girl he barely knows but really likes. She may not be all she seems either. Who is a hero to trust?

Exciting and riveting. Excellent narration. Enjoyed very much and was hard to put down the Kindle.

Would you try another book from Scott Allan Morrison and/or David Colacci?

I would have made the protagonist a lot less exotic. He had too much unbelievable baggage. His angst seemed silly. The actions scenes would be more believable. I believe the author knows computers. I do believe he has ever been in a fight nor visited a construction site.

I liked it when he was hacking.

Did Terms of Use inspire you to do anything?

The book was so promising. The author's purple prose was off-putting.

It kept me enthralled, despite my not being a "techy "
I wonder if a social-bot guided me to write this review 🤔