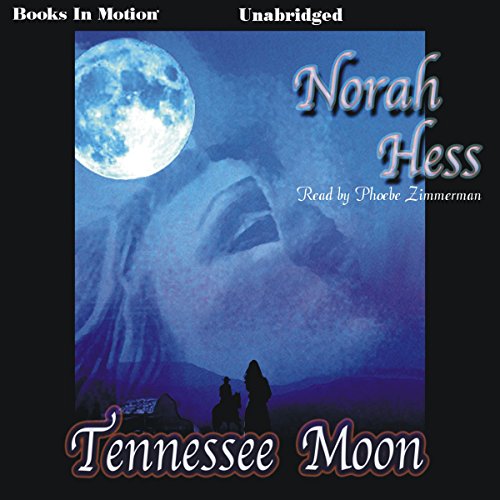 Tennessee Man: Tall, quiet and darkly handsome, Matt Ingram had shouldered more than his share of life's burdens. Besides working his farm in the Cumberland Gap and raising his little nephew, he had to keep a watchful eye on his womanizing wastrel of a stepbrother. And he knew he had his work cut out for him on the night the two men first saw their beautiful neighbor.

Tennessee Moon: She appeared out of the mountain mists, looking more like an airy sprite than a flesh-and-blood woman. But when the moon broke through the fog, illuminating her red gold curls and sweet smile, Matt's reaction was all too real. He longed to lose himself in Kaitlan's innocence, to forget the betrayals of the past that had made him brooding and bitter. No matter what it took, he would protect Kaitlan from the careless seduction of his stepbrother, for his was the one woman whose bright spirit could light up his life.

This is my favorite Norah Hess book. Sure the characters can be a tad naive, but I love them. Zimmerman gives an excellent performance. I love the voice she gives the characters.

Unique Setting for a Historical

I like the author's settings and heroes, because they are a departure from mansions, wealthy tycoons and titled Englishmen. Basically, the H's are what I'd call rednecks or good ole boys, and I mean 'redneck' in the most affectionate sense of the term. I was born and raised in the mtns of the Southeast, I have nothing against rednecks. They're just people like anybody else, some are awesome, some suck, and every shade in between.

Tennessee Moon was set in Tennessee (obviously), more specifically the Cumberland Gap area of Eastern TN. I was born about 80 miles from there, closer to the NC line, where I now live. Anyway, the Cumberland Gap Nat'l park is a cool place to visit. There's a spot where you can put one foot in TN, one in KY, and a hand in VA. In my biased opinion there is nothing more beautiful than the mountains of the Southeast, but they aren't generally a popular setting for historical romance. So, I was very excited to listen to this audiobook for nostalgic reasons.

Re: the narrator. She was pretty good. I'm not extremely picky. As long as the H's voice is reasonably masculine and not nasally or real annoying sounding, I'm cool. The East TN accent wasn't right though. Many of the locals sounded too 'down east' or 'deep south'. Anyway, it didn't really bother me, the only reason I noticed is because I still have that accent myself, despite all my years of education.

I liked the book mostly because of the setting and Hess tends to draw me in. The h and the H were both likeable and the H (Matt) was much less of a blustering bully than Chance in 'Fancy' (even though I liked that book better). Some of the aspects of the love story were beyond ridiculous, but they amused me in their absurdity.

The H, Matt, owns a successful tobacco farm. He's not fabulously wealthy, but rich by the standards of the area. He's the big catch, but doesn't seem to realize it. Even though this was during the era of slavery Matt doesn't own slaves. That's not out of the question, because slavery wasn't as widespread in the mtns as it was deeper south and further east. It all came down to economics not morality (depressingly). The mtn people didn't typically have large plantation style spreads of land and there was quite a bit of poverty. Both the need for and ability to feed/clothe slaves was different. However, those who could afford it did often own slaves. I will(not proudly) admit that some of my ancestors were slave owners in the mountainous areas of Virginia. So, it wouldn't have been out of the question for Matt to have owned a handful of slaves. I expect Hess just left that out to avoid the issue, which is understandable.

When the h, Kaitlan, comes to The Gap after inheriting her grandfather's small farm, Nate decides he's going to marry her. She's beautiful and - most importantly - she owns this nice little farm. So, he proceeds to shower her with attention and lay the charm on her.

Matt isn't happy about it. He is attracted to Kaitlan and knows his brother will screw up her life. Kaitlan is a bit blind for a good part of the book. On one level, she realizes that Matt is the one who is always there for her when she needs it (helping with the farm, shooting marauding bands of mountain lions, etc.) While, Nate, for all his pretty words is always MIA when work needs to be done. Yet, she holds on to her illusions about Nate for quite a while (which is partly the H's fault). I forgave her, however, because she was very sheltered and had never had male attention before Nate. She was a great target for someone like him.

Here's where the ridiculous comes in and *warning* it may offend some who are particularly triggered by consent issues. Personally I found it so improbable it was hysterical.

Nate is known to be rough in bed and Matt decides he's going to be the one to take Kaitlan's virginity, so she'll at least have one good experience and of course he lusts after her. So, he sneaks into her dark bedroom and does the deed while letting her think he's Nate. Then he keeps coming back night after night and warns Nate to put off their wedding and not try to sleep with her or he'll beat him up. Matt hopes he can make Kaitlan fall in love with him and she'll realize she doesn't want Nate anyway. Problem is, all of Matt's hot lovemaking sessions keep her attached to Nate, who she is otherwise becoming disillusioned with. So, Matt kind of cuts his own throat there.

Yes, Matt's actions are totally wrong - dubious consent at best. However, it was so fricking absurd (plus, I like bodice rippers so I wouldn't blink an eye at this scenario). Matt never talks during his nighttime visits and apparently it is so dark she can't see anything. But still. Srsly?!? Matt is supposed to be this big, muscular, working man while Nate is a bit shorter and also leaner due to being lazy. You're telling me you wouldn't question the fact that your bf has suddenly gained 50lbs of muscle? Or that he never says a word?! Not once? But she never suspects, not even once. She doesn't find out the truth until they marry (supposedly for the sake of the baby she ends up pregnant with and believes is Nate's. Nate's dead at this point, more on that later). She FINALLY puts 2 and 2 together on their wedding night when Matt makes all the same moves as Nate did. And she is pissed (thank God). It would have been even more absurd if she wasn't. Of course, they do end up HEA after a few weeks of her cooling down and another convenient panther attack.

Panthers/Mountain Lions no longer exist in the SE except for a few in FL (unless you believe my uncle, who swears he's seen one in VA). Anyway, yes, they are big predators and have killed people, but they weren't attacking and eating people at the rate of 2x per novel (this happens in Fancy as well). Mostly they tried to avoid people. Cats are smart. I'd imagine most were killed out of plain fear/ignorance, for their pelts, or because they came to eat the farm animals late at night. Not because white people were being massacred left and right. Somehow the Native Americans survived for hundreds of years without being wiped out and you VERY rarely hear of an attack out west where they do still exist. I can remember exactly one and it made the national news because of how rare the event was. Please, Norah, lay off the poor kitties. I know you need something for danger, but isn't it enough that we've wiped most of them out?

Anyway, I overall enjoyed the book despite some of the silly. However, I would love to know what happened to Nate. We know he got sick and died, but never learn what made him sick. My money is on brain eating syphilis due to his promiscuity and crazy behavior. But the world may never know.