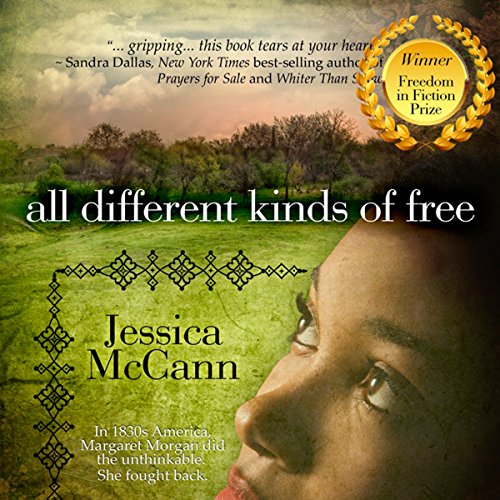 All Different Kinds of Free

By: Jessica McCann
Narrated by: Mia Bankston
Try for £0.00

A free woman of color in the 1830s, Margaret Morgan lived a life full of promise. One frigid night in Pennsylvania, that changed forever. They tore her family apart. They put her in chains. But they never expected her to fight back.

In 1837, Margaret Morgan was kidnapped from her home in Pennsylvania and sold into slavery. The state of Pennsylvania charged her kidnapper with the crime, but the conviction was later overturned by the U.S. Supreme Court. It was the first time a major branch of the federal government had made a pro-slavery stand, and the ruling in Prigg v. Pennsylvania sewed the bitter seeds of the states' rights battle that eventually would lead to the Civil War.

Yet, the heart of this story is not a historic Supreme Court ruling. It is the remarkable, unforgettable Margaret Morgan. Her life would never be the same. Her family had been torn apart. Uncaring forces abused her body and her heart. But she refused to give up, refused to stop fighting, and refused to allow her soul to be enslaved.

About the author: Jessica McCann's work as an award-winning journalist has been published in Business Week, The Writer, and many other publications. All Different Kinds of Free is her first novel. Learn more about McCann online at www.jessicamccann.com.

What listeners say about All Different Kinds of Free

Gripping emotional story!Starts slow but worth it.

The author unfolds a remarkable story about the emotional trail of the characters. The story starts slow but provides realistic details necessary for the plot. The narration is good. I highly recommend the book to those who enjoy realistic historical fiction.

I really enjoyed listening to this book!! I will definitely recommend to all of my friends.

This book was an excellent Novel. Although the character that portrays the antagonist, Mr. Prigg got under my darn skin, the author had a way of making me just want to jump into the story and help the protagonist, Margaret! This was definitely a story I'd like to see on film. It's an eye opener for all that's for sure. Although a fiction novel, but based on a reality of the ancestors of African Americans, Maybe the trials and tribulations of this family could provoke a bit of compassion from those that keep saying, stop crying over something that's happened over 200 years ago, or similar comments about slavery and how we should just get over it. Maybe it could invoke a bit of understanding of how it's not that simple and how the past has affected the present and even maybe in the future. A page turner for sure!!!

this story evoked numerous emotions, in a paper world it would have been referred as a page turner. amazing narrative, excellent story, left me wanting more

This gem was a nice surprise. So glad I took the chance on this one.

Overall I was just greatful for the coverage

I think the listening time was well spent hearing that there was a black woman named Margret Morgan, who dared to fight back for her freedom. I think it was worth listening just to hear her story. But I would probably encourage you to read it on your own.

I felt like the dialect and language was not appropriate. I’ve read a lot of period novels and I’m always baffled with the way the English language has transformed over the years. But in this book I didn’t feel like the language transplanted me into Pennsylvania in the 1830s. I kept feeling like some of the dialect that was used by the slaves for instance at the Bean plantation was not quite right. Not even whites in the South used those words in those days (at least not in the ones I have read). I kept feeling like, “Margret wouldn’t say that”… As I mentioned previously this was just my impression, you may not agree.I just didn't feel like I was in Pennsylvania, Maryland or anywhere else in the South.

The narrator has a great voice but I felt like her rendition was a little too melodic and slightly disconnected from the character. I enjoyed the beginning, her ecstasy with freedom was very apparent and in my mind appropriate. However, when she started to discuss her anguish with losing her children it sounded much the same (her tone). I would have enjoyed the story more if the narrator would have abandoned her open mic performance. I don’t know that is just my opinion. You may thoroughly enjoy it.

Was All Different Kinds of Free worth the listening time?

Don't let my review deter you, see for yourself

This novel was well-narrated and engaging from cover to cover. I was sorry that the book ended.

Love this story. There was no struggle to finish. This story is four stars. The narrator was excellent, truely brought the characters life. All hats off to the writer. Great job, unveiling African Americans history, in all aspects.

Loved the story and the narrator had a great voice and was great with the different character voices, but her inflection was very much lacking in several parts.

Good but tragic and not very believable

Story was very compelling and all too tragic. The family seemed to take the circumstances of their situation in such stride it made the story too unbelievable. It seems like Margaret should have been screaming to the high heavens she was free but she just sorta rolled with it all!?!