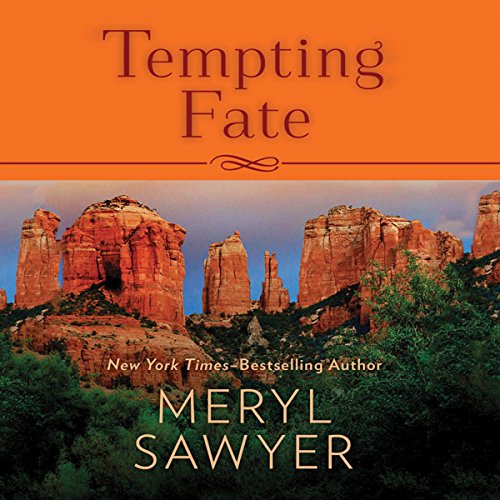 By: Meryl Sawyer
Narrated by: Rachel Vivette
Try for £0.00

Kelly Taylor's career as an investigative journalist was derailed by a news story that resulted in tragedy. But she may get another shot at the brass ring. After vanishing 25 years ago, the long-lost son of a powerful state senator has turned up in her Arizona town.

With few memories of his childhood, Logan McCord grew up to become a trained killer who fights terrorism. A twist of fate reunites the Special Ops agent with his family, but the homecoming isn't what he expected. With his true identity exposed, Logan's enemies know where to find him.

Kelly and Logan start to fall for each other, but in Logan's dangerous world, there's no shortage of enemies who want to make him disappear.

What listeners say about Tempting Fate

I have been searching for a writer who can tap into a suspense live story. The plot is compelling and deep enough for you to get lost.
Some great sex scenes although it was with the wrong couple! I loved this book, truly worth the read. I will be reading all of her books.

What a great surprise. Narration was great. Lots of action and suspense. Just wish there was an epilogue. :)

Would you consider the audio edition of Tempting Fate to be better than the print version?
I have waited and requested this story for audio version for years. This is one of the author's classics, along with Hideaway. I had met Ms Sawyer at a book signing in the 90's, and this book is one that I re read every few years as the story is that good.

What was one of the most memorable moments of Tempting Fate?
When Logan is eating dinner, and describes his most interesting meal in South America.

How could the performance have been better?
Rachel Vivette, AKA Kate Rudd, is not my list of readers to buy. I purchased this as an automatic buy when I saw the title, but didn't recognize the readers' name. From the sample, I couldn't place the voice. Her male voice is Ok, and she has greatly improved it, but she has a sing song cadence on her female parts that is not for me. If you are a fan of Kate Rudd, then don't miss this great story. If you are a Meryl Sawyer fan, well you will have to buy this for Logan part.

Any additional comments?
Use new 1.2 speed and it’s good. It’s my 2nd re listen and l got use to narrator and actually got her good groove,
I know readers have different contracts with publishers, hence Also Known As names, but If you don't like a reader, then you don't like them. It great when many narrators actually improve as they learn this craft. When a fan waits a long time for story to be recorded, it is such a disappointment, if they are not a fan of the reader. However, if a reader reads their reviews and get better, then Bravo. I have 3 classics read by Kate Rudd so I am still hoping to turn into a fan l must admit, I did turn into a 100 listen fan of Ms Angela Dawe because I love her male voices and her cadence with children's voices. She is superb for Scottish accents.
Note: must listen at new 1.25x speed for most stories to get author's intent.
Were my comments of help?