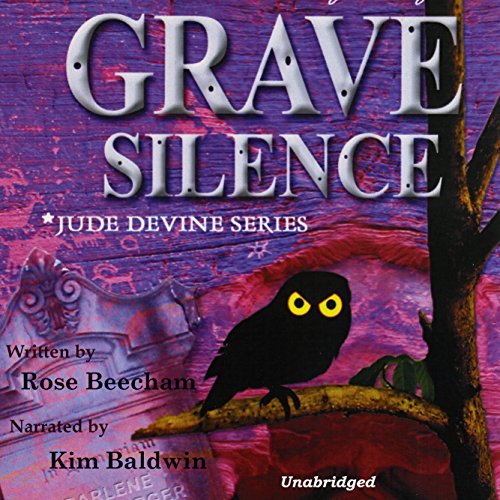 By: Rose Beecham
Narrated by: Kim Baldwin
Try for £0.00

Montezuma County Sheriff's detective, Jude Devine doesn't face too many challenges based in remote Paradox Valley, where most of the crime involves hiker assaults, campsite thefts, and cattle rustling. However, when the body of local teenager shows up with a stake through her heart, Jude finds herself leading an investigation no one wants to touch. As Jude uncovers the truth about the murder and tries to save a young girl from being forced into a marriage, she must decide how much she is willing to risk to see justice done. Further complicating her choices is her torrid entanglement with the golden girl of Southwestern forensic pathology, Dr. Mercy Westmoreland.

What listeners say about Grave Silence

If you could sum up Grave Silence in three words, what would they be?

AWESOME LESBIAN MYSTERY! The book is a very good mystery, with a lot of information about the 4 corners area, along with a lot of information on the Mormon's Polygamy groups and how they operate just outside the law and get by with it. And you get all this information from the POV of a lesbian woman, And there are other people to Identify with, June's deputy who had a need to prove himself but was always out of step with the other cops, There is the young ex-Mormon woman desperate to get her little sister out of the hands of the Polygamist. It is a full rich novel full of characters, including Jude's love interest, Dr. Westmorland The renowned ME from Grand Junction. Keeping Jude on a tight rope. As I said the novel is very rich and full and well written by MS. Beecham,

Jude who was full of secrets, I could go on and on about them, but they would need spoilers. She is just so cool. And the Mystery so well written.

Have you listened to any of Kim Baldwin’s other performances before? How does this one compare?

Is this the same Kim Baldwin the writer? When does she have time to read other peoples work unless Rose Beechum is Kim Baldwin because Rose Beechum is a pen name, I know she wrote under several names, Still Kim Baldwin is like a hugely successful writer. I love her work, Unless this is a different Kim Baldwin at any rate she is a very good reader. She brings Jude alive. Makes you love Jude.

I wish I had that kind of time, as it was I almost listen to most of it in one night, but I didn't get much sleep. I normally listen to books at night to sleep, Which means backing them up and listening to them over and over,

This a great book!!! And I hope they record the other two Jude Devine Novels. The Trilogy is a great set, I always wished Beechum would of written more books but I guess commercially they didn't sale well, Lesbian books don't sale six million copies.

Overall good story line, action was good kept me wanting to finish. The reader was okay but while attempting to change her voice from low to lower "manly like" lost me from time to time because of it.

i love how jude devine is a sexy tough character but also believable and human. the storyline is complicated, not just good and bad guys. interesting and thoughtful suspense. the romantic interest isn't the main point of the story and isn't totally lame. what a pleasure to read.
the only bad thing about this series is that there are only 3 books as far as i can tell. write more please!

Where does Grave Silence rank among all the audiobooks you’ve listened to so far?

This was a good book and insight into another world, but it seemed forced. I like the growth of the characters, but it felt slow. This a good listen, but you must be patient.

Would you ever listen to anything by Rose Beecham again?

Absolutely, because I want to see the growth of the characters.

Her pitch and timber was very masculine even though I know she was a more "butch" female. I wish it was not so stereotypical.

The narration was great, the story was interesting and even though it seems to be part of a series it does well as a stand alone.

definitely an interesting story and mystery.

interesting. the mystery is intreging. only down side was an unworthy love interest who seemed uninvolved in any significant way and uninterested. I really hope there is another book.

Looking for something with a strong female character and came upon this, I wasn't disappointed.

Nearly flawless mystery/drama/thriller and one the best lesbian novels I've experienced about a lonesome detective in Colorado attempting to solve a murder of a young girl that originated in Utah. There are a number of delightful subplots and, as a whole, the book is a refreshing departure from the average Bella or Broad Strokes fare, with a flawed, realistic lesbian lead that lacks all the hallmarks of a Mary Sue and whom you never stop rooting for. This is my favorite book in a long while, lesbian or otherwise, and I will wait maddeningly for the next entry in the series.

The narrator, though, is absolutely horrible. I understand that Kim Baldwin is an accomplished author, but as a narrator Kim's thick Midwestern accent, headache-inducing whistle on her soft C's and 'S's and flat, emotionless delivery made listening to a stellar novel excruciating.

Unless you'd like to hear Hillary Clinton on Dramamine or Frances McDormand circa Fargo describing lesbian sex and thrilling standoffs with all the excitement of a C-SPAN filibuster, I'd STRONGLY recommend listening to the sample for yourself and just reading this terrific novel via paperback or Kindle.

Way too much detail about the Abusive treatment of teens, both male and female who are a part of an LDS polygamist cult. It might be reality but it was nothing I wanted to listen to in great detail. The narrator is an author and in my opinion should stick to it. I only made it through about 2 hours of this one before the combination of those two factors convinced me to give it up.